Doc Rivers expects Ben Simmons to play, be accepted back by teammates when he returns to Sixers 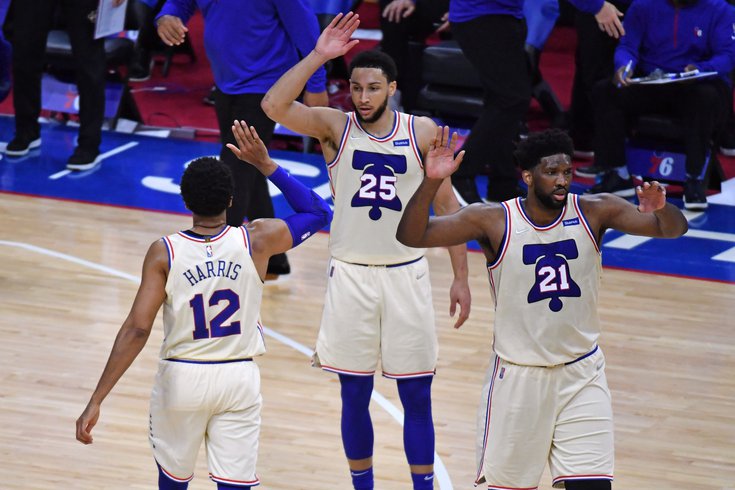 Will Tobias Harris and Joel Embiid welcome Ben Simmons back with open arms? Or will things be a little awkward in the locker room?

UPDATE [10:05 p.m.] — According to ESPN's Adrian Wojnarowski, Ben Simmons is nearing a return to the Sixers. The All-Star guard reportedly arrived in Philadelphia and has taken the COVID test required by the league's protocols. The next step, per Woj, is getting Simmons back on the court. And while Doc Rivers said earlier on Monday that they expect Simmons to play, that remains to be seen.

Sixers are hopeful to start moving toward the next steps of a return with Simmons, per sources. Organization wants him back on the court once he clears protocols, but that remains to be seen. https://t.co/4Zc3gUp50R

Doc Rivers' relationship with Ben Simmons is one of the key pieces to sort out if the Sixers are set on making any sort of marriage (temporary or permanent) work with the Australian star. By his own admission on Monday night, Rivers has not yet spoken with Simmons, who looks closer to returning to the team after continued conversations between Sixers brass (Rivers included) and agent Rich Paul.

The head coach, though, does not view that as a barrier to Simmons returning and said the Sixers' position has not changed in spite of report after report about Simmons' future.

"We've said from Day 1 what we've wanted, that we'd love to get him back. Other than that, honestly, there's nothing to report," Rivers said. "Our position hasn't changed at all."

"Our conversations have been good throughout, honestly. I don't know if anything has changed. But we've had very good conversations."

There's a bit of truth-stretching going on here, though certainly for the "right reasons" from Rivers and the team's perspective. The Sixers have been consistent with their position, that they'd move Simmons if a deal to improve the team was on the table, otherwise preferring to keep him in the fold as they attempt to win a title. Whether the conversations have been good or not is a matter of some debate, and some things have undoubtedly changed — namely Simmons' consideration of returning at all, following leaks that he'd sit out an entire season before coming back to Philly.

As has been said throughout the offseason, a holdout of this caliber is rare, borderline unprecedented given the length of time left on Simmons' rookie max extension. With people all around the league staring at this situation, the Sixers have repeatedly insisted they felt they were holding the best cards.

That doesn't necessarily mean they're winning cards overall. Philadelphia still has to get to a point where Simmons is either motivated to play well enough to either help them win or drive his trade value back to a point where they can get proper value in a trade involving Simmons. On Monday, Rivers said publicly what some team officials have said privately since a Simmons return became more likely — if and when Simmons is back, the organization expects him to play. And he doesn't expect Simmons to come back pouting and refusing to give his all for the organization.

"I'm not going to talk about what Rich [Paul] and I have talked about," Rivers said, "but clearly that's what we want. We wouldn't be talking if that wasn't part of it... My guess is when/if he comes, I think he'll be ready to play."

Then there's the question of Simmons' reception in the locker room, a completely different can of worms. Simmons has kept quiet on the public front, but the people around him have made plenty of noise about why he wants out during the offseason. There was the recent report about feeling the Embiid partnership has, "run its course," among other stories, which Embiid himself responded to in an extended rant during Sixers training camp recently.

Throughout the process, Sixers teammates have lobbied for Simmons to come back, including Embiid, who was part of a group of players prepared to visit Simmons in California in order to smooth things over and get him back in the fold. Simmons is said to have told his running mates not to bother, adamant that nothing could be done to change his mind.

Are these all things that can be looked past? Rivers believes so, ultimately saying that players are willing to do whatever it takes to band together and win when push comes to shove.

"Players don't get involved with people's business. That is the one thing I think is probably overplayed more than anything. I've been a player and this has happened before, and I was the player that has done it before. Other than that first 10 minutes of welcoming back and taking the crap from your teammates about missing camp and stuff, guys want to win," Rivers said. "Especially if you're on that type of team, where you have a chance to win."

If you've listened to his teammates talk during the preseason, there may be some truth in that. Looking inward, Tobias Harris told reporters that with the power of hindsight, he has his own regrets about how the situation unfolded, wishing he had done more in the days following their crushing loss vs. Atlanta.

"I think a couple of things have been miscommunicated," Harris said at media day. "If I knew the situation was going to be where it is right now the day after we lost to Atlanta, I would have had the whole team pull up at Ben's house [to] have a conversation. When you got a group of men and individuals, we all have egos, we all have people in our ear, but...to a man, everybody went home that night not taking some type of ownership on ourselves that we lost the game."

Still, there will be healthy skepticism about bringing Simmons back until and unless he shows up and proves ready to compete at the highest level. The Sixers have wanted to have him back in the hopes they get capital letters Ben Simmons, who has gone on hellacious stretches in the regular season and played dominant basketball in the first round of the playoffs. But without having a look at him since the season ended, the Sixers have no frame of reference for something as simple as his conditioning, let alone the state of his game, his mentality, and his will to compete for the organization after a dramatic offseason. Will things hold together if they get off to a rough start, or will fingers start pointing at the first sign of adversity?

All anyone can do right now, Rivers included, is take it one day at a time and hope for the best.