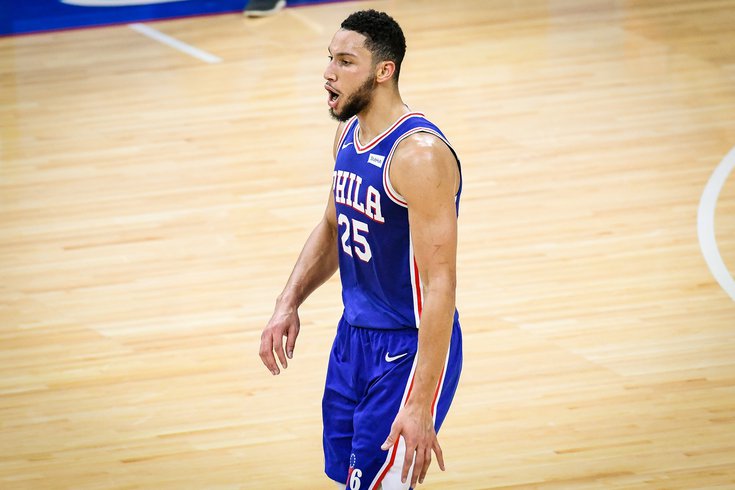 Despite assurances through various media members of note, a league source says the financial significance of holding out is starting to take hold in Ben Simmons' camp.

After being fined for missing Philadelphia's preseason loss to the Toronto Raptors on Monday night — a penalty of roughly $360,000 — Simmons' representation had another discussion with the players association in which it was reiterated they would be unable to recoup the money being deducted from the $8.25 million sitting in escrow, sources say, and it was communicated to the Sixers that these early fines were perhaps higher than they expected.

Simmons has the right to seek arbitration for 30 days and can move for accelerated arbitration after the loss of the hefty game check. Few believe that will be a successful route for Simmons, who has no-showed for work while his camp drip-feeds stories in the media about his desire to play elsewhere. With signs of uncertainty out there, the Sixers have set themselves to prepare for just about anything, up to and including Simmons deciding to show up for work in spite of previous insistence that it wouldn't happen until he's traded.

MORE: What's the latest on the Ben Simmons trade rumors front? And why does the Sixers guard really want out?

At every turn, league insiders have gossiped about what the next angle might be to leak from Simmons' camp to the media. Each successive leak has been met with eye rolls in some circles — the Sixers trying to trade him for a superior player in James Harden, for example, was not viewed by any reasonable party as an indictment of how they've treated him. Doc Rivers' comments after Game 7 and Joel Embiid's imperfect fit with Simmons were floated next, met with the observation that Rivers has been his biggest booster (internally and externally) and that the Embiid pairing has led to lots of winning and strong data points in favor of the duo.

Even still, this has prompted the Sixers, the teams monitoring the situation, and even the league to prepare for a wide variety of scenarios, some of that based on ongoing discussions with Simmons' camp. The Sixers have had formal and informal discussions with Simmons' camp recently, which sources familiar with the situation characterize as scattered in message based on the day and the person speaking. As of yet, there seems to be no uniform consensus on what is best for Simmons.

A source familiar with the conversations between Simmons' camp and the Sixers told PhillyVoice that the only consistent or clear message this offseason was about the accelerated timeline Simmons has been evaluated on compared to other No. 1 overall picks. In most instances, agent Rich Paul and others have pointed out, top picks are sent to bad teams where they can figure out who they are and how their career is going to play out. Having missed his first year out of LSU due to injury, Simmons joined Embiid to form a partnership capable of winning 50 games right away, and the Sixers have been considered contenders (or at least pseudo contenders) at various points during the last three seasons, increasing scrutiny on his development.

Though members of the organization are sympathetic to the accelerated timeline and expectations that have come with it (under several different management structures to boot), that argument is viewed as self-defeating, and the signing of his max extension was seen as the time where any reduced expectations went out the window.

MORE: Key Sixers storylines to follow during their preseason schedule

Fair or unfair to Paul — and there's an argument he draws more heat than any non-player in the league right now — there are people at the team and league level who see this as the continuation of a pattern with his clients, characterized by one league source as throwing stuff at the wall and hoping something sticks. The expectation is that there will be another attention-seeking headline generated in the days to come as they assess their options of what to do next.

On the team side, the Sixers appear to be in relative lockstep so far, armed though they may be with the knowledge there are on-floor issues to solve without Simmons. As of this writing, Philadelphia would rather keep him as part of the organization and work through things as they can instead of trading him for a diminished return. They are banking on several factors, primarily their own ability to make due early in the season and the chance that uneasy situations might blow up elsewhere, to carry them through and eventually strengthen their options. They would (at least for now) be happy to have Simmons back, provided anyone can convince him returning is in his best interest.

As has been the case throughout the process, there is significant interest in this situation throughout the league all the way up to the league office, where sources have remarked on the unprecedented nature of Simmons' public attempt to get out of his rookie extension before the second year had started. The league is wary of players trying to force their way out after signing deals that are explicitly designed to allow teams to hold onto stars they've drafted, especially so as signs of discontent emerge in other situations (e.g. Zion Williamson in New Orleans).