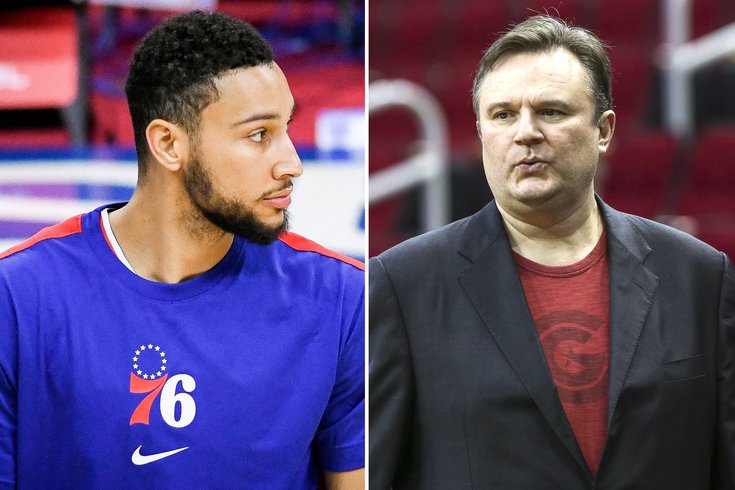 The Sixers are expected to withhold payment to Ben Simmons worth 25% of his salary — payment valued at over $8 million — in the latest development of the trade saga that just won't end, a league source confirmed to PhillyVoice on Friday afternoon. Bleacher Report's Jake Fischer was the first to report the news on Friday. Simmons' contract is structured in such a way that reporting to camp would have resulted in him receiving the first 50 percent of the salary owed to him for the 2021-22 season.

Up to this point, the Sixers have been clear they would address the situation through the means available to them, though they refrained from specifying exactly what they'd do, framing everything around what's available thanks to the league's collective bargaining agreement.

"It's pretty, very clearly spelled out in the CBA and his contract what happens," Daryl Morey said Monday at media day when asked about Simmons and the possibility of doling out fines.

It's important to note this is a withheld payment rather than the loss of a huge chunk of his salary. In the event that Simmons shows up to Philadelphia, as many with the team have said they expect to happen at some point, that money will eventually make its way to Simmons' bank account. But with Simmons refusing to report to camp as of this writing, the payment is being withheld until Simmons renders services to the team — and according to Tim Bontemps and Bobby Marks at ESPN, the cash available to him is going to dwindle the longer this lasts.

Reporting with @WindhorstESPN and @BobbyMarks42: Sources confirm the 76ers have not paid Ben Simmons the $8.2 million he was owed today. The money has been put in an escrow account, & any fines accrued by him for not showing up will be deducted from that amount moving forward.

That fine money will escalate starting next week, as the Sixers begin their preseason schedule against Toronto on Monday. Each missed game will result in a loss of roughly $227k for Simmons, the question being just how long he'd be willing to sit out and how much money he's prepared to flush down the drain.

If the Sixers have felt empowered at all in this process, it's a result of a number of factors. For one, they're as aware as anybody that Simmons is in a unique situation with four years left on his contract, compared to other wantaway stars who were closing in on the final year of their deal. That contract status has attracted attention from power players across the league, including at the league office, who are monitoring how this situation plays out with a close eye.

Whether Simmons will show up in the wake of this decision is a matter of some dispute. Fischer, who broke the news of the withheld payment on Friday, included word that this could be part of what prompts the Sixers' point guard to show up to camp:

In turn, there have been growing whispers this week among NBA sources with knowledge of the situation that Simmons could respond by actually reporting to Philadelphia in the coming days, but maintaining that he is injured and unable to compete. Simmons has had noted knee and back injuries in the previous two seasons.  [Bleacher Report]

Shortly over a half-hour following Fischer's report, Shams Charania of The Athletic weighed in with his own reporting on the situation, indicating Simmons has accepted the consequences of his decision:

Sources: The 76ers are not paying Ben Simmons his $8.25 million payment due today as the three-time All-Star awaits a trade. Simmons still is not showing up to Philadelphia and has understood the ramifications of his holdout.

Where does the truth lie? There have indeed been discussions around the league about the possibility of Simmons showing up to report while finding a way to not actually play/suit up for the Sixers again.

Doing so under the guise of an injury is probably the most straightforward path to doing so, though it's arguably the most absurd path forward given the backdrop of the last few months. Simmons/Simmons' camp has consistently leaked stories about his desire to get out of Philadelphia, all the while posting videos of him working out and playing full speed in pickup games. In fact, Simmons has shared pictures and videos from the gym himself, drawing plenty of heat from the outside for what he chooses to share on Instagram. You would be hard-pressed to sell an injury to the public, much less the team employing you. And if showing up with an injury (real or imagined) is ultimately the path Simmons takes, it may not help him avoid the wrath of the fanbase he's said to be worried about, who would likely boo him in street clothes as hard as they would in uniform.

If he's as convicted as Charania says he is, though, that's all moot. The Sixers' position has been consistent in the front office and down on the floor — management does not want to trade him away for a discount price, and the rostered players are carrying on with the group they have whether he shows up or not. They have all said they want him back, but as Joel Embiid showed during a long answer regarding Simmons on Thursday, patience is being tested as they prepare for a new season.

Prepare for anything, would be my advice to the public. Every page in the disgruntled star playbook is available to him, and it's an opportunity to be more creative than he has been in crunch time if nothing else.