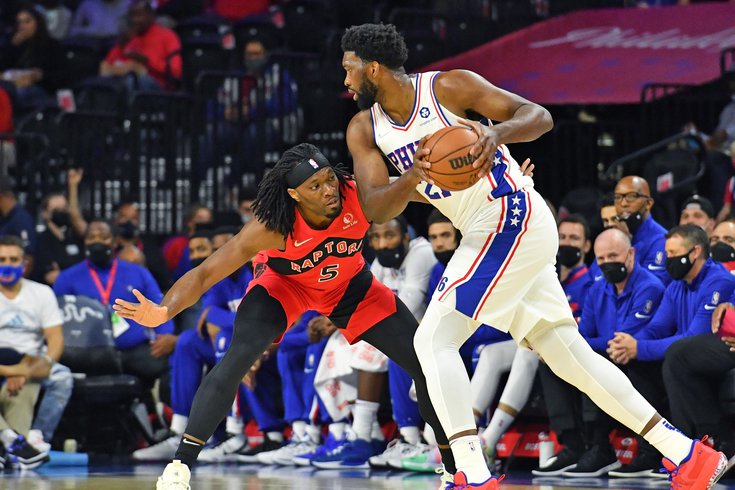 Joel Embiid and the Sixers won their first game at home to open the preseason.

The Sixers bounced back against Toronto with Joel Embiid and Tobias Harris back in the lineup, waltzing to a 125-113 home victory that was out of reach for most of the game. Philadelphia got solid production and effort from guys up and down the rotation, putting together a good team victory.

• Joel Embiid cared just enough for a preseason game for my liking. He was relatively engaged on defense, making some nice plays around the rim to turn away Raptors drivers, and not comically into running the floor at other times, standing near Philadelphia's free-throw line while his teammates ran the break and tried to score in transition. Given his history, I think it's okay for the big guy to make a few business decisions and save the wear-and-tear in a meaningless game.

It wasn't all that pretty for him as a scorer in this one, with Embiid missing a few jumpers and coughing the ball up against Raptors pressure in the post a few times, though he did make reasonably good decisions with the basketball, picking up a few assists in the first half by simply making a simple read and hitting one of the many shooters around him.

About that last part — Philadelphia's offense didn't look particularly crisp, with some stuttering in the halfcourt and in transition, but by virtue of getting shooters on the floor at basically all times, they had an excellent first half on the hardwood, putting up 71 points by launching 23 threes (and making 12 of them). Even with guys like Danny Green bringing the ball up in transition, they were able to cobble together an effective attack by letting it fly whenever they got open. Not exactly a complicated philosophy.

(Speaking of transition basketball, Tobias Harris is not Ben Simmons there, but I think his ability to grab and go will give them a nice set of options after they get stops. He can either hit a trail three on the catch, get to the basket, or perhaps even dribble into a pull-up three of his own. I'm not worried much about transition offense, though I suspect the other way might still be ugly.)

It might be too much to ask to expect the Sixers to shoot better than 50 percent from three on high volume and for Embiid to dominate in the post, but if they're not relying on him to carry them on offense all of the time, he can be the difference-making anchor on defense, so the value will come one way or another. Aside from getting more cardio in, not much more we probably need to see from him in the preseason.

• This was just a rock-solid game for Harris, whose addition to the lineup took a decent amount of pressure off of everybody in the lineup. A little bit of floor spacing, a little bit of transition playmaking, a little bit of finishing in traffic, the only area where he struggled at times was in the mid-post, which he can dominate from but should probably be a smaller part of his game in the first place.

One thing that was nice to see — Embiid clearing out of space to allow Harris to set up on offense, and then going back to him after he got reestablished later in the possession. They are going to need to be (and act like) true co-stars to open this season if they're going to get off to a good start, even if they aren't involved in direct two-man action all that often.

They don't need Harris to try to overextend himself with one of their top players missing. If he takes and makes open shots, plays unselfish team basketball, and helps them keep some semblance of pace, he'll have done his job.

• Moved into a second-unit role after starting in their opener, Tyrese Maxey had an excellent bounceback performance against the Raptors on Thursday. It's a role that makes sense for him on paper — rather than worrying too much about the distribution he needs to do for the top-of-roster stars, Maxey can get in attack mode and score the basketball, which we all know he can do well.

How many tricks can he add to the bag this season? That's the million-dollar question. The highlight of his night was a beautiful stepback three late in the clock during a run with the second unit, bailing them out of a mediocre possession with a shot that would launch him to a different tier of player if he can hit it with any regularity. That's a big ask, and the Sixers would settle for him being a reliable outside shooter of any sort, but we saw increased confidence in that shot during his brief run in Las Vegas over the summer.

Whatever they determine is his optimal role, you get the feeling he will figure things out eventually. Rivers has not committed to a starting group one way or another, so don't be shocked if Maxey's role swings back and forth this year, especially early in the season.

• We'll see if it holds the rest of the year, but Seth Curry's quick trigger from the playoffs appears to have carried over into the 2021-22 season. That would be a huge development for Philadelphia, whose brain trust has constantly lobbied for Curry to take more threes whenever he's even remotely open.

That strategy paid off in a big way on Thursday night. Curry was 4-for-8 from deep and was part of a barrage to end the first half that put the Sixers comfortably out in front, and he has the past production to convince you this can be a regular thing moving forward. Let that thing go, man.

• Breaking news: Danny Green is still good at shooting corner threes, and you can bet he's going to get a ton of them this year when teams collapse on Embiid in the paint and the ball swings around the perimeter.

• Whether or not Isaiah Joe is a good or impactful defender is a different story — it is hard to make up for a major weight gap at this level — but he has played with a level of energy that sets him apart from a lot of his teammates in the preseason. Given that he also has legitimate floor-spacing ability, he's a threat to get minutes this season and perhaps sooner than you would think.

During an extended stint in the first half, Joe's energy was palpable, and the Arkansas product mixed it up in a few scrums to fight for loose balls and help the Sixers win back possession. Transition defense was a point of emphasis in the film room after a ghastly team performance there on Monday, and Joe is one of the few guys I think can hold his head high there after their first two preseason games.

(All that said, he's gotta be able to do all that without fouling. Joe picked up three fouls in just nine minutes in the first half, and that's tough to live with even if your heart is in the right place.)

As we saw at Summer League, there also appears to be a little more to Joe's game on offense than just shooting. He can handle it a little bit, and while point guard duties are beyond his reach, he has enough secondary creation skills to pick up an assist or two or score at the rim. He has looked better than Furkan Korkmaz (a natural competitor for his minutes) in the preseason by a decent margin.

• Speaking of guys who competed hard on defense, Georges Niang was diving all over the floor on Thursday, often successfully coming up with the ball in a tangle of limbs and bodies. But more importantly, he played a much more simplified role on offense, focusing on that catch-and-shoot thing he does so well after struggling in every possible way in the preseason opener.

As long as he's not asked to do too much, he'll provide plenty of value this season.

• I really enjoy Paul Reed stepping on the floor and seeming like he has been shot out of a cannon each and every time. That energy can be chaotic at times, but he never seems to run out of it.

• Moving Shake Milton into the starting lineup that I think makes some sense for him, the group around him, and for Tyrese Maxey. He's another shooter on the floor (at least in theory), he doesn't have that much responsibility with a talented group around him, and Maxey's energy and pace add some juice to a bench unit that badly needs it.

Unfortunately, Milton's play during the first two games has been uninspiring regardless of who he's playing with. In fact, it doesn't even look like Doc Rivers wants him doing too much initiating despite the position he's playing — the Sixers ran a lot of their halfcourt sets with other players at the heart of the action, Milton mostly relegated into catch-and-shoot duty. When they asked him to do much else, it was a bit of an adventure, with rookie Scottie Barnes harassing him and forcing a turnover or two before Milton could get the play going.

It's a shame Milton does not seem better equipped for the role, because I think this group could be formidable with Maxey as the consistent spark plug in the sixth-man spot, assuming that means you have a good fifth starter. They're probably going to have to toggle between lineups and roles, which is fine, but as the Ben Simmons situation drags on, you start to picture how this would all look if (and perhaps when) they move on.

• There was a brief attempt to start a "F*ck Ben Simmons!" chant from some fans in the lower level on Thursday night, though that died out relatively quickly with the Sixers in the midst of an excellent shooting stretch. We'll see if the natives grow more restless over time.

• You have to respect the insane behind-the-back pass Korkmaz attempted in transition early in the third quarter. Doc Rivers didn't find it all that amusing when he turned it over once again about a minute later, but if you can't laugh a little in the preseason, it's going to be a long year.