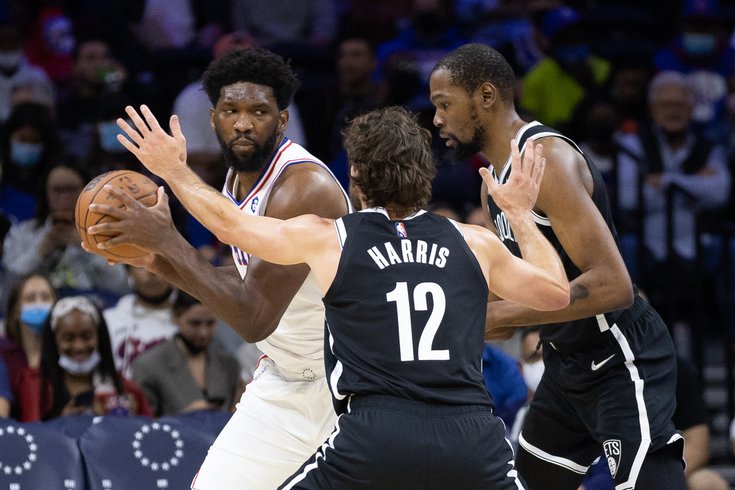 The Sixers punched Brooklyn in the mouth to open the game and never really looked back, riding a spirited effort from backups to a 115-104 win over the Nets on Monday.

• There are all sorts of qualifiers you can make about what we saw early on Monday night and throughout the preseason generally — Brooklyn was down important players and out of sorts, the Sixers have had some unsustainable shooting runs, and yes, it's just the preseason. But with Joel Embiid on the floor and shooters around him, Philadelphia's offense has looked pretty damn good.

Throwing small lineups at Embiid with this cast around him does not seem all that wise for opponents. The Nets tried to use a combination of Blake Griffin and Paul Millsap against him in Monday night's matchup, and he just absolutely bullied both guys, throwing Millsap off him and to the ground on the first possession where they were matched up. It wasn't much better for Griffin, who consistently lost the battle for positioning and had Embiid shoot over him when he didn't.

The downstream effects of Embiid's dominance were obvious. Nets defenders tried to send help in his direction, and more often than not it led to a complete breakdown somewhere else, turning the game into a shooting gallery for Philly's perimeter players.

Embiid told reporters after his first game of the preseason that he has come out with a playmaker's mentality, and that has certainly shown up so far. He has forced a few possessions and coughed it up against pressure here and there, but he is constantly looking for the release valve from the post when doubles come. A step forward as a passer/playmaker would make him and the team even more dangerous, and perhaps all it takes is lineups that can bring that out of him.

(Should he have played more than his eight first-half minutes? Honestly, don't really care one way or another. Getting him out unscathed is cool in my book.)

• Nobody is having a better preseason for the Sixers than Isaiah Joe, who has done absolutely everything he can to carve his name into the rotation before the season starts. Even when he inevitably cools down as a shooter, and the kid is shooting fireballs out of his eyes right now, he has already shown enough offensive utility to remain a valuable rotation piece during his cold stretches.

On Monday night, Joe had the unenviable task of going toe-to-toe with Brooklyn's James Harden, and frankly, he got the better of the perennial MVP candidate. The Sixers put Joe in a lot of DHOs and a few pick-and-rolls with Andre Drummond once Embiid hit the bench, and Joe absolutely thrived on-ball, making the right read on seemingly every play. He found Drummond with a lob for a dunk, hit a pull-up three turning the corner against Harden, and sprayed other passes to teammates who were left open after he penetrated the paint, masquerading as a point guard for good chunks of the first half.

Is that realistic to expect in the regular season? Probably not. But Joe has looked every bit the part of a high-level role player long-term. He has a potentially elite skill, offensive versatility and upside, and he's a competitor on the defensive end who buys into his role on both ends of the floor. Every team in the league could use a player like that, and the Sixers should make sure they actually use him this season.

• Speaking of Sixers starters who outplayed James Harden, Furkan Korkmaz certainly relished the opportunity to step back into the starting five on Monday night. In the past, we have seen him turn in a few big performances with stars taking pressure off of him, but Korkmaz was one of the leaders of an undermanned group against Brooklyn, and he was excellent save for a few comedic errors.

Seventeen points in 19 first-half minutes ain't half bad, and Korkmaz got there with all sorts of tricks, flipping in some tough shots around the basket while doing his usual thing from beyond the arc. The best thing you can say about his night is that he made a preseason game watchable with roughly half of the players out on both teams. If competition makes everyone better, perhaps Joe's emergence is summoning Korkmaz's best.

• The few standouts from this game aside, this was an absolute ass-kicking that was never close even after the Sixers decided to pull Embiid for the rest of the evening. Kevin Durant looked menacing against Philly's undermanned perimeter defense, but he struggled to make any sort of dent into the lead as the game wore on, and he eventually ceded the floor to backups who had no shot to hang with Philly.

A few points of emphasis for the bench mob:

Everybody did their job on Monday night. Excellent team performance.

• I absolutely love Paul Reed's competitiveness, and he showed some real defensive versatility during Monday night's game. Any guy who can step out and guard James Harden and then serve as the weakside shot-blocker at the rim has something to his game.

The big challenge is going to be getting him to understand what he does (or at least should do) on offense. You don't want to stifle young players as they're developing, but there needs to be a realistic sense of what is and isn't in their wheelhouse. Reed takes a few too many jaunts toward the rim off of his own dribble and would be better served just launching a few more jumpers or swinging the ball. On possessions in quick succession during the first half, Reed had ghastly turnovers where he got himself into trouble and then compounded it with a pass to no one and nowhere.

When he sticks to the basics, Reed looks promising. When he doesn't, he can look like a giraffe on ice skates.

• The Nets looked like an absolute trainwreck on the defensive end. I understand they're down some guys and offense is their calling card to begin with, but good grief, it felt like they were just making up their rotations on the fly at times. Brutal even for a preseason game.

• Just throwing this in there since it broke during the game:

I'll say it again, going from "Simmons is willing to sit out the season" to "He made it through three preseason games" is absolutely wild to me. The NBA equivalent of the Wall Street Bets crew on Reddit calling easily-intimidated investors "paper hands."