Eagles vs. Buccaneers: Predictions, betting odds and more for Week 6 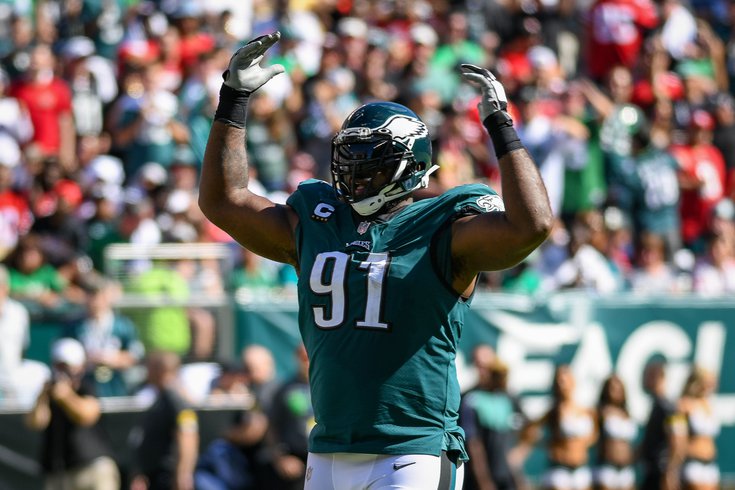 For the second time in the last month, the Eagles will be playing in primetime. But Eagles fans don't need to get used to that, as they'll play just one more primetime game the rest of the way, unless one of their games over the season's final three months is flexed, but that seems unlikely at this point.

Unfortunately, the Eagles didn't put on an impressive performance in their first night game of the season, getting blown out by the Cowboys in Dallas a few weeks back. And this test likely won't be any easier. Sure, the Birds will be at home this time around, but they'll be facing Tom Brady and the reigning Super Bowl champions, the Buccaneers, who are 4-1 and have looked dominate at times so far this season.

Unfortunately, the Eagles will likely again be missing Lane Johnson — along with Isaac Seumalo (out for the year) and Brandon Brooks (IR) — on the offensive line. They'll also be missing Dallas Goedert, who the Eagles placed on the COVID/reserve list on Tuesday. The Bucs, meanwhile, are already thin in the secondary — and will also be without linebacker Lavonte David — but they remain the toughest run defense in the league, allowing just 2.9 yards per carry. That could lead to another pass-heavy offensive game plan from Nick Sirianni, although there's a good chance that was going to be the case anyway after seeing what he's drawn up through his first five games at the helm.

It's a short week, and that means our predictions come a day early, so let's not waste any more time as we take a look at what our writers have to say about the upcoming matchup and whether or not anyone sees the Birds pulling off the upset...

The Eagles have had to face a pair of the league's elite offenses already this season in the Dallas Cowboys and the Kansas City Chiefs. In those two games, not including kneeldowns, the Birds allowed 11 TDs in just 18 possessions, and the Cowboys and Chiefs made it look easy.

They'll face another elite offense on Thursday night. The Buccaneers employ the best player in NFL history, the best set of wide receivers in the NFL, and a very good offensive line. Unlike the Cowboys and the Chiefs, however, Tampa also has a suffocating defense.

There are good feelings in Philly once again after the Eagles were able to steal a win on the road against the banged-up Carolina Panthers, but reality will once again set in that the Eagles cannot hang with the best teams in the NFL.

Assuming Tom Brady is playing — he had a minor hand injury last week but looks ok — the Buccaneers should cruise to victory over the Eagles. Their win over the Panthers was promising, but I don't think the offense can keep up with Tampa's air attack, which will really put Darius Slay and Steven Nelson to the test trying to keep up with Antonio Brown, Mike Evans and Chris Godwin.

I think it'll be respectable and they may even cover the spread at home in front of revved up, Brady-hating fans, but the Birds will drop this one inside the seven-point margin.

There's really no reason to overthink this — the biggest area of debate for this writer was whether the Eagles were going to lose by one touchdown or two. Ultimately, I decided to split the difference and go with a 10-point loss for Philly. And honestly, it all depends what that loss looks like on the field. If they play decently and just lose to a clearly better team, fans will at least be able to take a moral victory away from that coming off a win over the Panthers and heading into a game that suddenly looks more winnable than ever against the Raiders.

Obviously, there was no taking moral victories from the Chiefs and Cowboys losses — and this Bucs team will offer an even tougher test than those two did — but playing at home on Thursday night has been good to the Eagles in recent years, and while I don't see them winning or even keeping it a one-score game, I do think the final will be closer than some of my colleagues. As long as that's not due to a garbage time TD or two, then Philly fans should be able to wake up on Friday and not feel like the world is collapsing, an odd feeling admittedly for the day after an Eagles loss.

Call me crazy, but I'm going to go ahead and put my money on Tom Brady. Though I swear, one of these weeks I will probably pick the Eagles to win.

Tom Brady is not Sam "I just threw another interception" Darnold.

The Eagles are coming off their biggest win of the season, while the Bucs are sleepwalking through lopsided wins. It’s the league of letdowns and unfortunately it’s the Eagles' turn.

There’s a short week for both teams and the Bucs are on the road, down a couple of players, but it’s Brady. Not just new and improved Tampa Brady, but all of that plus "Remembers the Super Bowl Brady." Nobody on the Eagles has any vendetta against Brady, but he certainly has one against this team. It would be typical Brady to take it out on the Eagles in some meaningless regular season game.

Hurts and the offense should look better than the first half of last week, but their defense isn’t taking on DJ Moore and DJ Moore. This is going to be a huge week for Antonio Brown, simply because the top-heavy Eagles secondary doesn’t have enough bodies to match-up with the Bucs. Hopefully the Eagles can create some pressure up the middle against Brady and that offensive line, but at the end of the night the Bucs escape with a hard-fought win.

There's a lot going the Eagles' way on Thursday night, starting with the most obvious: being the home team on a short week. No one likes "Thursday Night Football" in the NFL, other than Jason Kelce, who actually seems to like the short weeks, the bean counters, and perhaps the bank accounts of everyone involved if they want to step back and think about the additional revenue to the bottom line adding another night to the television package provides.

In the moment, however, it's a necessary evil in a sport that wasn't designed to play place twice in four days.

If you have to do it, eliminating the travel hurdle on top of all the other issues is a solid checkmark for the Eagles. So is health. Tampa Bay's estimated injury report listed linebacker Lavonte Davis (ankle), tight end Rob Gronkowski (ribs), center Ryan Jensen (hip), safety Antonie Winfield (concussion) as non-participants to start. David isn't expected to play and the others are very iffy. Meanwhile, star quarterback Tom Brady (thumb), receiver Chris Godwin (knee/ankle), and edge rusher Jason Pierre-Paul (shoulder/hand) are also banged up.

In a KISS (not the band but "Keep it Simple Stupid) week, the team with arguably the greatest QB of all-time and a veteran coach in Bruce Arians should be much better equipped to handle the scaled-back prep and the bright lights of prime time.

This is just too much, too soon for Nick Sirianni, Jonathan Gannon, Jalen Hurts, and Co.