Eagles mailbag: What is your level of concern for Jordan Mailata at RT? 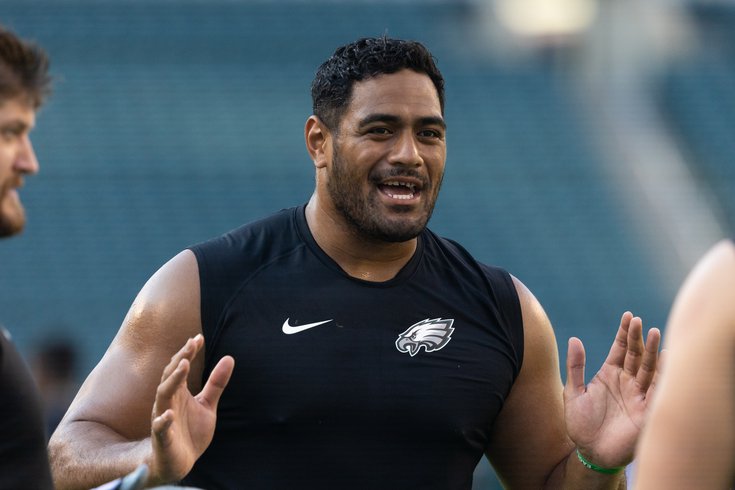 Jordan Mailata tells a Nick Foles story to some teammates.

Question from MailataHive: What is your level of concern for Jordan Mailata at RT?

Let's look at the two sacks that Mailata allowed on Sunday in Carolina. The first one was a shot play. It had a play action element, with a double move to DeVonta Smith down the left sideline, including a pump fake from Jalen Hurts. The Eagles had five receivers out in routes, meaning that they gave no help at all to their line. Mailata is blocking the exact type of edge rusher you would expect him to struggle with in Haason Reddick, a 6'1, 240 athlete with outstanding speed:

Mailata will consistently handle bigger dudes all day. But a short, explosive, speed demon? Those guys will win some reps against him. On the first sack, Reddick beat Mailata around the edge, and even got a good shot in on Hurts.

Would that play have gone differently with the same matchup, but on the left side? I don't know. Maybe? But I will say that if you're going to call a shot play that is likely to require over three seconds of protection against a team with stud edge rushers and not much else, give your tackles some help.

On the second snap, Mailata didn't seem to be expecting the ball to be snapped when it was. Reddick is watching the ball, while Mailata is waiting for some other queue, which he obviously didn't get. It's hard to know who exactly is at fault here (maybe Mailata, maybe someone else), but this is not a sack that you would attribute to a player switching sides along the line.

Anyway, is Mailata more effective at LT than RT? Of course. That's his comfort zone. But I do think that he's also plenty capable of playing on the right side as well, and I wouldn't overreact just yet to that one bad series.

Question from DB: If Dillard continues to improve, do you just plug Lane Johnson back in whenever he is ready?

That's an interesting hypothetical. I think that will partly depend on how long Lane is out. If he returns soon, then yes, they plug him back in. If he's ready to return in, sayyyy, two months, and Dillard/Mailata are playing well at LT/RT, I don't know that you plug him right back in.

Question from Furkan Korkmaz Fan Club President: Many writers, yourself included, when reporting on the "LT competition" this past summer portrayed an Andre Dillard that was complete garbage. Now he has played three actual regular season games and has looked pretty good. Should we expect to see a few mea culpas in the near future? Do you think he has improved his trade value, and would the Eagles even be willing to trade him at this point?

There will be no mea culpas dished out here for identifying how bad he was in training camp. It was clear as day. All we're doing is relaying what we see in practices. That said, as you noted, he has played well in his three starts. As such, we gave him some love for his positive play here.

Similarly, Nick Foles played poorly at the end of the 2017 regular season, and arguably into the first game of the playoffs against Atlanta. Then he crushed it in the NFC Championship Game and in the Super Bowl. It wasn't wrong to say that he was bad in those initial games, just because he played well later.

As far as Dillard's trade value goes, for sure, his game tape in the last three games is far better than anything he showed as a rookie. So yeah, I imagine he has improved his trade value. However, given the Lane Johnson situation, I can't imagine the Eagles are in a rush anymore to deal him.

Question from The Boice: Any chance Howie Roseman picks three defensive players with their three first-round picks next year? I say just get the best three pass rushers available and try to win some NYG 00's-type Super Bowls.

The last time the Eagles took a defensive player with either a first- or second-round pick was 2017. That would be four consecutive drafts with all offensive players in the first two rounds.

On the one hand you could say, "They're overdue," and I wouldn't necessarily disagree. On the other hand, if they used all three of their first-round picks (if they even have three first-round picks) on defensive players, that would be a pretty drastic departure from their recent M.O.

Question from jlinpv: Have you begun looking at QBs for the 2022 draft? Are any franchise guys?

I haven't looked super closely at any of them yet, at least in the same way I watched guys like Trey Lance, Zach Wilson, Justin Fields, etc. back in February.

But in just watching them casually on TV, I really like Matt Corral (Ole Miss) and Malik Willis (Liberty). There's a perception that this is not a quality quarterback class. It's not as good as the 2021 class, but Corral is going to be a top 10 pick, and Willis may be as well. This class is not completely devoid of good QB prospects.

Question from RKotite: Even if the Birds get to 4-4 at the trade deadline, the Eagles are sellers, right? Unless something dramatic happens with Dallas (unexpected losses, injury to Dak), the hopes to squeak out a playoff spot in a weak division has passed us by, no?

If this were some sort of "How well do you know Howie" quiz on Facebook, you'd score a 0/10, ha. If they win two of the next three games, with two games a piece remaining against the Giants and WFT, plus a game against the Jets, Howie is gonna be like:

Question from Steamed Ham Recipe: Free play, thrown out of bounds. Have you ever seen that before? Yikes. That's like '70s Buccaneers blooper reel stuff.

In the Chiefs game, Hurts threw the ball out of bounds on 4th down, too. After the game, he said he understood the game situation and didn't mean to throw it out of bounds. I wasn't sure if I believed that or not, but now I do.

Question from Tony: If he continues to maintain his poor level of play, how much longer do you think Jalen Reagor will be on the field simply due to his draft pedigree?

Quez Watkins finally got more snaps than Reagor Week 5, so that was encouraging. But Reagor will be involved all year. The alternatives are Greg Ward and J.J. Arcega-Whiteside. I'd rather give Reagor opportunities to improve.

Question from James: Any legit Pro Bowlers on this roster other than Javon Hargrave?

Maybe Jason Kelce, though I can't say I've watched any other centers closely. Jake Elliott also hasn't missed any kicks yet, aside from a blocked kick against the 49ers.

Question from QB Factory Worker: Punting-related question. Andre Chachere seems to be flying under the radar in terms of having an awesome name and playing really smart special teams. Credit to the player of course, but is that another reflection of Michael Clay's impact on the unit?

I've toyed with the idea of showing Chachere's play this season, but I wrote a good (IMO) special teams breakdown on Wednesday that did terrible numbers, so forget it ha. Maybe I'm get to him this offseason in one of those "player review" posts.

Anyway, my petty gripes aside, yes, Chachere has been a really nice back of the roster role player so far. He's been a good find. I'm curious if he can also play in the regular defense. At a minimum, he seems to have a good "football IQ."

Question from Franklin: Comp pick question (probably not the right time of year for this, but no better person to ask): If a team opts not to pick up a 5th year option, could that player count towards the comp pick calculation?

Question from DB: If Ben Simmons comes back with a legit jumper, how long before the crowd turns in his favor?

Lol at "If Simmons comes back with a legit jumper."

Question from Pete: Who gets a worse reception: Simmons back at Wells Fargo, or Wentz back at the Linc?

The Colts are scheduled to play the Eagles next year, but it'll be in Indy. If Simmons ever plays in a another game as a Sixer (consider me doubtful on that one), the reception is going to be super ugly, and sort of unprecedented for a player still on the roster. At some point though, whenever he's on another roster, he'll be back in Philly.

So let's call this one for Simmons, (a) since he's way more likely to ever play in Philly again, (b) because he'll almost certainly play here sooner than Wentz will if both guys do indeed return, and (c) he was faaaaar worse than Wentz in terms of trying to force his way out.