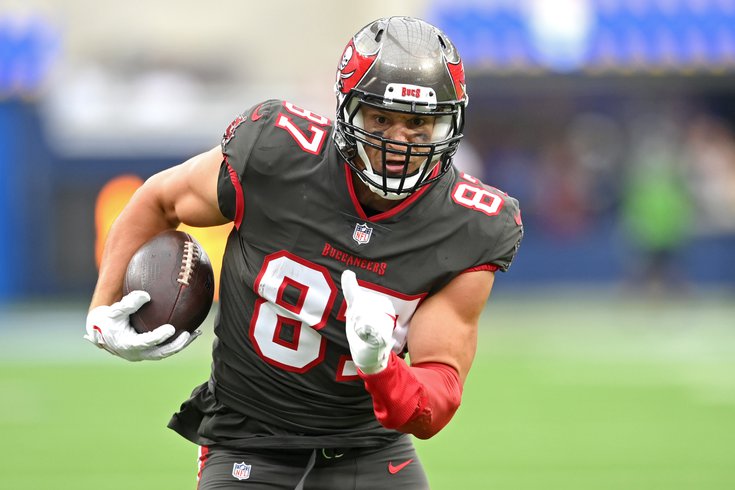 The Buccaneers will be Gronkless Thursday night.

The Philadelphia Eagles will head into their Thursday night matchup with the Tampa Bay Buccaneers without three offensive line starters, Brandon Graham, and TE Dallas Goedert. They'll face a Tampa Bay Bucs team that will be without a couple of starting cornerbacks, a starting linebacker, and a starting safety.

Here are the Eagles' and Bucs' inactives, with analysis.

• RT Lane Johnson: Johnson remains out with his personal matter. The Eagles' OL configuration in Charlotte last week was as follows:

It should be the same once again against the Bucs.

• TE Dallas Goedert: In order for Goedert to play on Thursday night, he would have needed to (a) produce two negative tests 24 hours apart, and (b) exhibit no COVID symptoms for 48 hours. That didn't happen. He's out.

As we noted in our five matchups to watch, the Eagles were in a position to use their TEs heavily against a defense missing LB Lavonte David, and S Antoine Winfield still in the concussion protocol. They'll need a big game out of Zach Ertz.

• OG Sua Opeta: Opeta has been on the COVID list for a couple weeks now.

• LB Lavonte David: Tenth-year starting linebacker for the Bucs. 34 tackles, 2 pass breakups, and 1 sack for Tampa in 2020. Kevin Minter will likely fill in.

• S Antoine Winfield: Good, young starting safety. In 2020 as a rookie, Winfield had 94 tackles, 6 pass breakups, 2 forced fumbles, 3 sacks, and an INT. Mike Edwards started in place of Winfield Week 5 against the Dolphins.

• CB Carlton Davis: Davis is a starting corner for the Bucs. He led the team a year ago with 4 INTs. As we noted in our five matchups to watch, the Bucs have been banged up at CB all year, and currently have two starters on IR. To help fill their holes at CB, they signed Richard Sherman, whose best years are behind him.

• CB Sean Murphy-Bunting: Murphy-Bunting is the Bucs' starting slot corner, and he's one of the best in the NFL. He'll likely be replaced by 30-year-old journeyman Ross Cockrell.