Week 6 NFL picks: Rounding up the experts' predictions for Eagles vs. Bucs 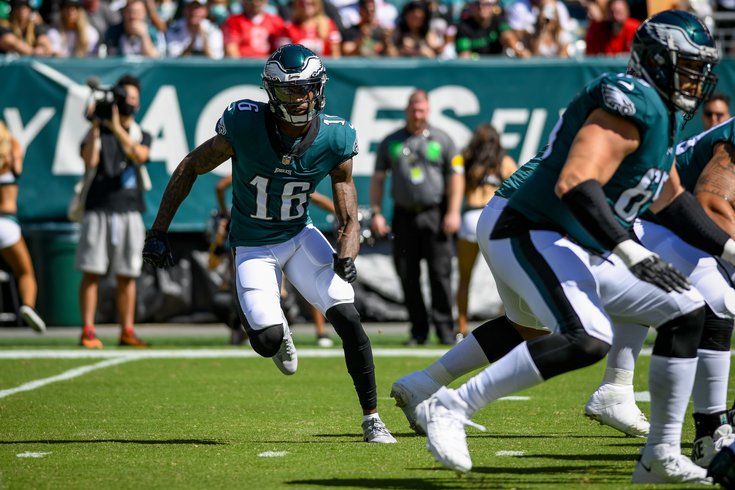 The Eagles haven't been able to stack up wins so far this season, but they'll get their second chance at winning back-to-back weeks on Thursday night in primetime at the Linc. Unfortunately for them, it won't be an easy task.

That's because they'll be facing Tom Brady and the Bucs, the defending world champions who bring their 4-1 record into Philly against an Eagles team with a young quarterback and a first-time head coach. As expected, Philly will be entering this one as underdogs, getting seven points at home from a Bucs team that can score with the best of them.

That's not new territory for Nick Sirianni's team, who has now been the underdog in each of the first six weeks of the season. Twice, including last week on the road in Carolina, the Birds were able to pull off the upset. But this opponent is not the Panthers or the Falcons. This is a Super Bowl contender — one of the favorites, to be more precise — and the Eagles haven't had great showings over the last month against the other two expected contenders they faced in the Cowboys and Chiefs.

Still, they play the games for a reason, and the Eagles have had great success in Thursday night games in recent years. They'll look to continue that trend against Tampa, even if the vast majority of the football world sees this game going to the Bucs.

As we do every week, we've rounded up numerous predictions from both the local and national media — and not unlike the Dallas and K.C. games, it's not easy to find someone who thinks Philly stands a chance. Let's dive right in to the picks for Eagles vs. Bucs...

• PhillyVoice staff: Last week, our staff was back to being split again, with only three of our writers correctly picking the outcome. This week, we're all going with the Bucs, and just one of us thinks the Eagles will even cover the spread. That's Evan Macy, who sees a 34-28 win for Tampa...

Assuming Tom Brady is playing — he had a minor hand injury last week but looks ok — the Buccaneers should cruise to victory over the Eagles. Their win over the Panthers was promising, but I don't think the offense can keep up with Tampa's air attack, which will really put Darius Slay and Steven Nelson to the test trying to keep up with Antonio Brown, Mike Evans and Chris Godwin.

I think it'll be respectable and they may even cover the spread at home in front of revved up, Brady-hating fans, but the Birds will drop this one inside the seven-point margin.

• Inquirer.com: None of their three writers even have the Eagles covering the spread. Here's how the newest member of the group, Josh Tolentino, sees this one playing out...

The Eagles defense is a scrappy bunch. The veteran-led unit showed Sunday at Carolina it can still cause enough havoc to disrupt opposing quarterbacks. The Eagles pressured Sam Darnold with eight quarterback hits and three sacks, allowing the secondary to make plays on the back end. Tampa Bay’s offensive line presents a larger challenge, but the Eagles will have a fighting chance to disrupt the Bucs offense. A lot will depend on the battle in the trenches, and Javon Hargrave is playing like the best interior lineman in the league right now.

Nick Sirianni and Jalen Hurts have yet to find a sweet spot in the offense. Considering the early offensive struggles, it’s tough imagining this roster has enough firepower to keep pace with one of the greatest quarterbacks of all time.

• NJ.com: All five of their football writers are picking the Bucs, but interestingly enough both of their Eagles beat writers think it'll be just a four-point game. Here's Mike Kaye...

The Eagles won a game they needed to win against Carolina last week. Unfortunately for them, they run into another juggernaut Super Bowl contender at home. The Eagles’ first-half home stretch is like a death by a thousand cuts, and the Bucs will bring their swords with them on Thursday. While the Bucs’ cornerback group can be thrown on, Tampa Bay’s receivers on the other side of the ball are just too much for this secondary. Oh, and Tom Brady throws them the ball.

• Bleeding Green Nation staff: Two of their seven writers are picking the Eagles to win. Keep an eye on that, as they could be the only ones going with the home team.

• NBC Sports Philadelphia: All four of their experts are predicting an Eagles' loss, including Ray Didinger, who sees a 31-20 victory for Brady and the Bucs.

Tom Brady is 44 years old with a bruised thumb on his passing hand and he will be playing on the road on a short week. So how effective can he be? Answer: As effective as he needs to be. He is Tom Brady. He's not a quarterback, he's a cyborg.

He won six Super Bowls with New England then signed with Tampa Bay last year and won a seventh. He has won 268 games, including post-season, and last week he threw for 411 yards and five touchdowns against Miami. In other words, this ain't Sam Darnold the Eagles are playing this week.

The Buccaneers defense is battered and vulnerable so the Eagles should be able to move the ball and score some points but Brady will score more. Good luck, Jonathan Gannon.

• ESPN staff: In a shocking development, we have a national writer picking the Eagles to win. Who is it? You'll have to click over.

The Eagles are coming off an impressive road victory over Carolina, and you know they will be juiced here playing the champs. Tom Brady lit up the Dolphins last week, but on a short week this is a real challenge. The Eagles will hang around in this game, as Jalen Hurts has a good day throwing it and running it against a bad Tampa Bay defense hit with injuries. Brady wins, but it's close.

• CBS Sports staff: All eight of their experts are taking the Bucs straight up, but half think the Eagles will at least cover the spread.

The Eagles are still figuring out who they are. The Bucs know.

Tom Brady and the Buccaneers are, at least in the regular season, playing even better than they did last year. They’ll cruise in Philadelphia.

The public is hitting the Tampa Bay Buccaneers pretty hard as a mere 6.5-point favorite over a clearly inferior Philadelphia Eagles squad this week, but it's possible that line is a red flag for bettors. It's not moving up, which means oddsmakers are begging you to jump on the Bucs.

Why might that be? Well, we're still talking about a 44-year-old quarterback and a veteran team traveling to a tough environment to play a desperate team on extremely short rest. And for what it's worth, the Bucs went just 1-3 on less than a full week's rest last season, with Brady throwing more interceptions (five) than touchdown passes (four) in those three losses (the only win came on a six-day week against the lowly Detroit Lions).

But that isn't scaring off a slim majority of our panel. They're laying the points...

• The Athletic staff: Both Zach Berman and Bo Wulf have the Eagles losing by double digits. Here's Zach's prediction...

There’s a reason why the Eagles are seven-point home underdogs — and I’m surprised it’s not double-digits. This game will resemble the Chiefs or Cowboys game more than the Panthers or Falcons game. The defense will have a hard time slowing down Brady, who will find answers against soft coverage. Unless the Eagles’ defensive line can dominate at the line of scrimmage — this is a much tougher matchup up front than last week — it’s going to be a long night for the defense and Gannon’s approval rating will continue to fluctuate. The Bucs defense will give the Eagles a challenge, although I expect the Eagles to move the ball with more success than last week. It won’t be nearly enough to keep pace. Look for the Bucs to win and cover. The Eagles will fall to 2-4. The good news is the schedule gets softer after Thursday. Bucs 35, Eagles 24

• Sheil Kapadia, The Athletic: Sheil picks games against the spread every week. This time around, he has the Bucs both winning and covering.

The Eagles’ offense managed just five first downs on its first 11 possessions last week before rallying for a win against the Panthers. The failure to come up with a more creative run game that involves Jalen Hurts has been baffling. They finally mixed in some of that toward the end of last week’s game and need to do more going forward. In the passing game, the Eagles have to get Hurts outside the pocket, given the mismatch of their two backup guards against Vita Vea and Ndamukong Suh.

On the other side of the ball, Tom Brady suffered a thumb injury during last week’s win against the Dolphins. How much did it affect him? After the injury, Brady completed 15 of 18 passes for 182 yards, according to The Athletic’s Greg Auman. The Eagles’ defense has played well against mediocre/below-average opponents. It’s gotten torched against good offenses. This is the latter.

Remember Tom Brady's inexplicable loss on "Thursday Night Football" against the Bears last year? Yeah, he probably does too. The Eagles rank third in the league in pass defense (194.8) and protect the ball well, but Brady will press them with a high-flying offense.

The Buccaneers face a short-week challenge but nothing too daunting as there are plenty of holes to exploit in the Eagles' defense once Javon Hargrave and Fletcher Cox are kept from getting into Tom Brady's face. Jalen Hurts can cause problems for a Bucs' defensive back seven missing key pieces with his big arm and running ability. But Tampa Bay tends to start hot and build while Philly can be slow out of the gate. That should ensure the Buccaneers build up enough cushion by the fourth quarter.