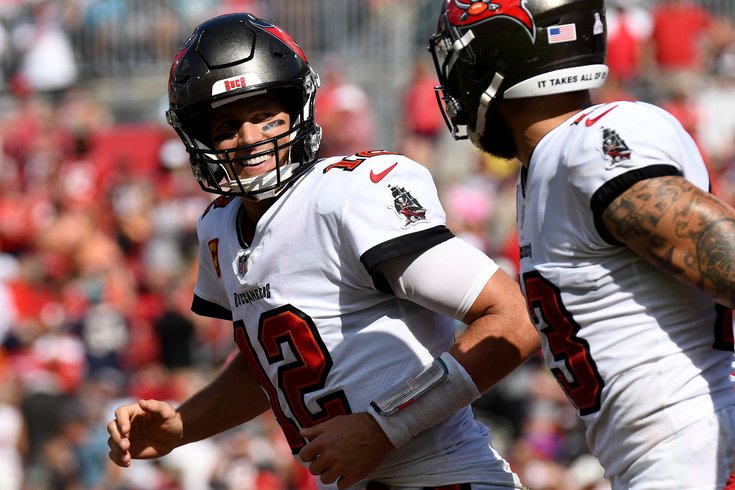 Tom Brady had his hand wrapped after the Bucs' Week 5 win over the Dolphins, but he should be good to go against the Eagles.

The Philadelphia Eagles suffered a bunch of major injuries early in the season, but have gotten through the last two games relatively unscathed. On Thursday night, they'll face a Tampa Bay Bucs team that will be without a couple of starting cornerbacks, a starting linebacker, and a starting safety.

Here is the final Wednesday injury report, with analysis.

• RT Lane Johnson: Johnson remains out with his personal matter. The Eagles' OL configuration in Charlotte last week was as follows:

It should be the same once again against the Bucs.

• TE Dallas Goedert: In order for Goedert to play on Thursday night, he would need to (a) produce two negative tests 24 hours apart, and (b) exhibit no COVID symptoms for 48 hours.

As we noted in our five matchups to watch, the Eagles were in a position to use their TEs heavily against a defense missing LB Lavonte David, and S Antoine Winfield still in the concussion protocol.

• OG Sua Opeta: Opeta has been on the COVID list for a couple weeks now.

MORE: Eagles vs. Buccaneers: Predictions, betting odds and more for Week 6 | Eytan Shander: How the Eagles can beat the Bucs | Five over/unders for Eagles' Week 6 matchup against the Bucs

• LB Lavonte David: Tenth-year starting linebacker for the Bucs. 34 tackles, 2 pass breakups, and 1 sack for Tampa in 2020. Kevin Minter will likely fill in.

• S Antoine Winfield: Good, young starting safety. In 2020 as a rookie, Winfield had 94 tackles, 6 pass breakups, 2 forced fumbles, 3 sacks, and an INT. Mike Edwards started in place of Winfield Week 5 against the Dolphins.

• C Ryan Jensen: Big, nasty starting center who is good in the run game, not as effective in pass pro.

• DE Jason Pierre-Paul: JPP has averaged over 10 sacks per season in his three years with the Bucs. Off to a slow start in 2021.

• DL Patrick O'Connor: Back of the roster guy.

• CB Carlton Davis: Davis is a starting corner for the Bucs. He led the team a year ago with 4 INTs. As we noted in our five matchups to watch, the Bucs have been banged up at CB all year, and currently have two starters on IR. To help fill their holes at CB, they signed Richard Sherman, whose best years are behind him.

• CB Sean Murphy-Bunting: Murphy-Bunting is the Bucs' starting slot corner, and he's one of the best in the NFL. He'll likely be replaced by 30-year-old journeyman Ross Cockrell.