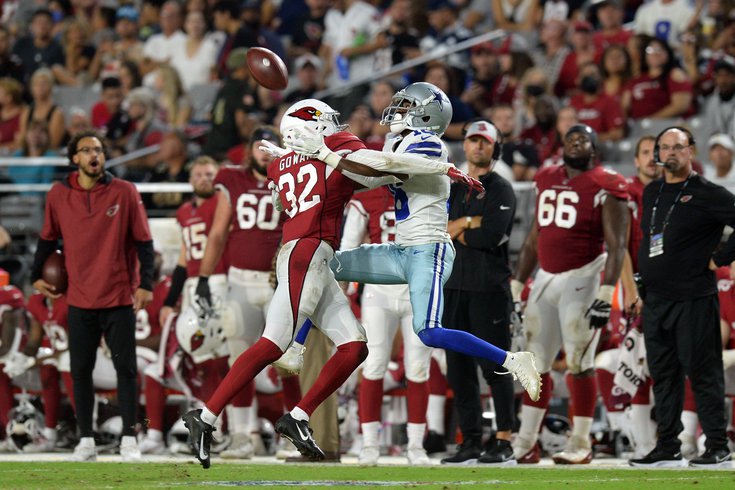 When the Eagles traded Super Bowl hero Zach Ertz to the Arizona Cardinals for a fifth-round pick and CB Tay Gowan, the focus initially was obviously on Ertz, and his eight-plus year career in Philadelphia. Now that the dust has settled on that trade, let's take a look at what Gowan brings to the table.

After a college career at UCF in which Gowan only played in 13 games, he was selected by the Cardinals in the sixth round of the 2021 NFL Draft. He got picked 223rd overall. The Eagles selected JaCoby Stevens 224th overall.

"He's a guy we spent a lot of time with in the draft process," Howie Roseman said. "He was somebody that we would have considered with our sixth-round pick. He was in a group of names. He went right before we picked and he's a long corner. He's got tremendous speed."

Gowan's only full season in college was in 2019, when he had 31 tackles, two INTs, and eight pass breakups in 12 games (nine starts). He opted out of the 2020 season, explaining that he had concerns about his daughter's health:

In case you can't read that small print, Gowan wrote, “I’m a father first to a beautiful baby girl who was born prematurely with health problems. I have also tested positive for COVID in the past and I will not put my daughters health at risk again."

Because of his inexperience at UCF, Gowan entered the NFL as something of a developmental prospect, but one who showed enough in Cardinals training camp to make their 53-man roster. He has not appeared in any games for the Cardinals, and has been a mainstay on their inactive list.

Outside cornerback who will struggle to stay connected to routes against speed or quality route runners. He does a nice job of crowding underneath routes and has the length and ball instincts to make receivers really work for it on contested catches. Gowan needs to get stronger, but has good size and length to work with. His area of effectiveness will be limited at the next level. He might need to be paired with defenses utilizing more Cover 2 or Cover 3 schemes.

It does seem that Gowan could be a fit for Jonathan Gannon's zone-heavy defense. A quick highlight reel:

Gowan will likely be inactive on gameday for a while with the Eagles as he gets comfortable in a new defense.