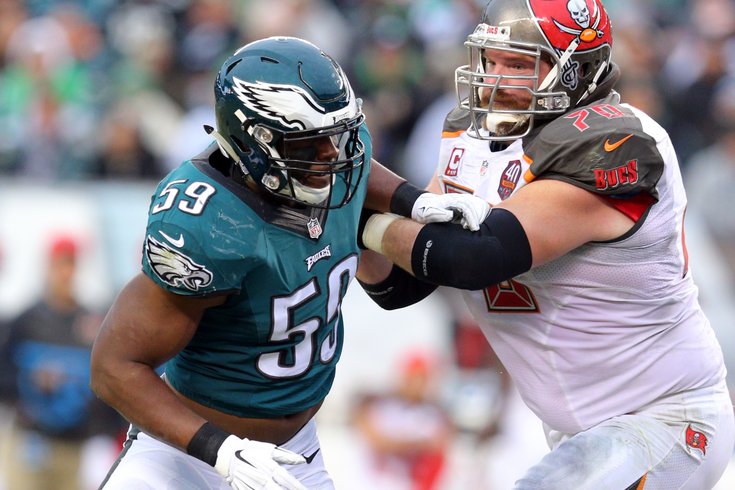 The Eagles will save $3.5 million by releasing DeMeco Ryans.

INDIANAPOLIS – The Eagles have decided to part ways with former starting ILB DeMeco Ryans, who joined the team in 2012 via a trade with the Houston Texans. The Eagles will save $3.5 million on their 2016 salary cap by releasing Ryans. He'll count for $1 million on the 2016 cap in "dead money."

Ryans became expendable when Jordan Hicks emerged as an impressive playmaker his rookie season. In approximately 7.5 games (and just five starts), Hicks racked up 50 tackles, a sack, a forced fumble, three fumble recoveries, two interceptions, three pass breakups, and a game-changing pick six against the Cowboys. Oh, and he knocked out Tony Romo for half the season.

There was no question that Hicks was going to be the Eagles' starter at MLB in 2016, which would have relegated Ryans to a backup role. Having Ryans on the cap for $4.5 million to be a backup wouldn't have made much sense for the Eagles. Meanwhile, Ryans' desire to start would have gone unfulfilled had the Eagles kept him around. By releasing Ryans now, Ryans' agent can get a head start and shop for a new team at the NFL Combine in Indianapolis prior to the start of the official free agency period, which will begin on March 9.

"He's our Mufasa," said Kelly during a 2015 press conference. "He's the leader of our defense. He's the leader of this football team. He's motivated every day we're around him and every second I'm around the guy. So, he's been an unbelievable mentor to Jordan and there's no one that wants to see Jordan succeed more than DeMeco. I don't think that motivates him; I just think that's the type of guy he is."

Ultimately, however, Ryans play declined as he aged and racked up serious injuries. While still an effective run defender, Ryans became a liability at times because of his lack of speed, as he was no longer an effective defender when asked to cover a lot of space. His leadership intangibles were no longer worth the money, especially when it's tough to be a leader as a bench player.

The Eagles could look to add linebacker depth in the later rounds of the 2016 NFL Draft.