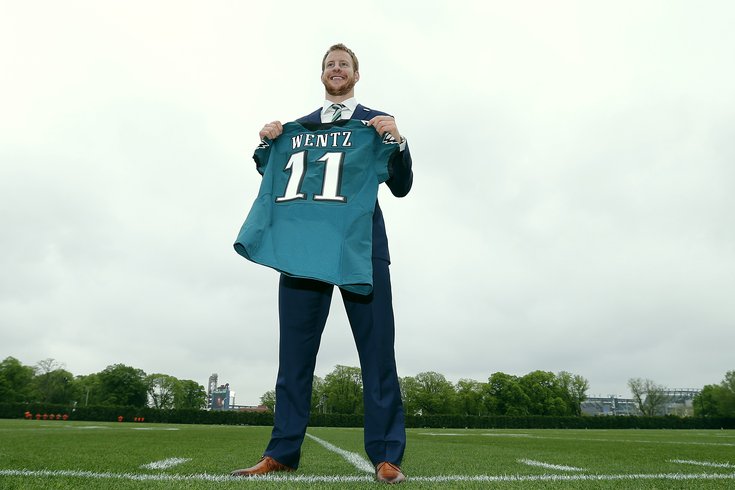 From Tebow to Wentz.

The Eagles released their rookies' new jersey numbers Friday. For those of you who want to order your brand new Aziz Shittu jerseys online, the wait is over. Here are the new guys' numbers, with analysis:

11 - Carson Wentz, QB: Kudos to Chris Givens for giving up No. 11 to Wentz, who wore 11 at North Dakota State. I would imagine his jersey will sell well this offseason, as the Eagles don't currently have a "face of the franchise." I don't love the 11 in the Eagles' font, but I do like the continuity of Wentz's college career into the pros.

14 - Hunter Sharp, WR: Yep. Get Riley Cooper's jersey right back into circulation immediately, and allow a likely-to-be-cut undrafted guy to put himself between Riley and a potential impact player who might wear it in the future. (No offense, Hunter).

35 - Cedric O'Neal, RB: Bummer that Kenjon Barner already has 34. It would have been fun for Cedric O'Neal to get Shaquille O'Neal's old number.

39 - Byron Marshall, RB: Bleh. If I were Marshall, who played RB and WR in college, I would have lobbied to be listed as a WR just to get a number in the teens over this slop.

45 - Myke Tavarres, LB: A linebacker in the 40's screams "CUT!" However, the Eagles gave Tavarres a big signing bonus, and they're very thin at linebacker. Maybe Tavarres can be a rare LB to make a club with a number in the 40's.

48 - John DePalma, LS: That's about right for a long snapper.

49 - Quentin Gause, LB: Again, another LB in the 40's pretty much means you'll get ignored by reporters in camp, which maybe isn't the worst thing.

50 - Alex McCalister, DE: Awful. When I think of the number 50, I think Mike Singletary. This is a classic linebacker number, and the Eagles gave it to a lanky 6'6 DE. Awful, awful choice.

72 - Halapoulivaati Vaitai, OT: Oooooh, love it. Vaitai didn't get his old college number because Malcolm Bunche has it, but this is even better. This is Tra Thomas' old number, and hasn't been been worn by an Eagles offensive lineman since his retirement.

74 - Connor Wujciak, DT: I actually think it would make sense for the Eagles to try to convert Wujciak to OG. I like it in that scenario, hate it for a DT.

77 - Destiny Vaeao, DT: I actually like a jersey overloaded with 7's for a guy named Destiny.

80 - Paul Turner, WR: 80 feels like a too premium of a number to be worn by an undrafted free agent. (No offense, Paul).