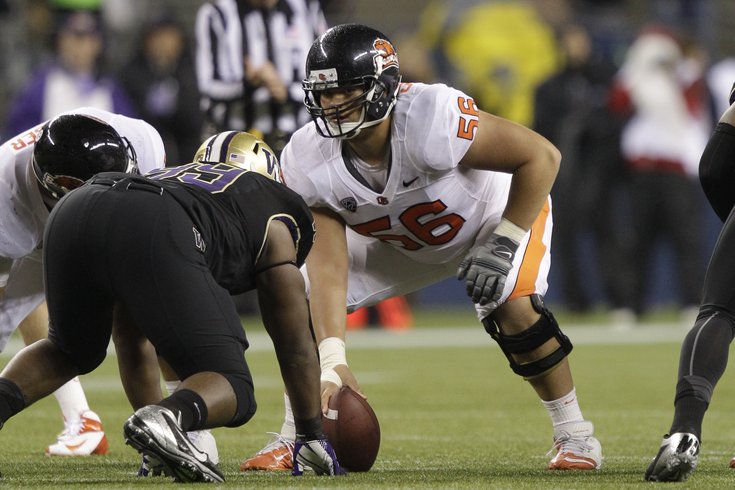 Isaac Seumalo can play all five positions along the offensive line.

In 2015, Seumalo played RG and LT. He is a unique player who can play all five spots along the offensive line.

When asked about what he values in offensive linemen, Doug Pederson emphasized versatility:

"You love offensive linemen that are versatile," explained Pederson. "You love to have tackles that can play left or right. You love to have guards that can also play center. The more you can have that flexibility with your guys up front, the more combinations and rotations you can have, because not everyone is going to stay healthy for 16 games and you have to mix and match that. Guys that are athletic who can get out on the perimeter and run, aggressive up front, have a little, as they say, 'piss and vinegar' in their neck are guys that you look for. I think we have a good nucleus of that."

I'm not sure about the "piss and vinegar" part, but Seumalo has the versatility thing going for him.

At the center position for the Eagles, Jason Kelce has rare athleticism, but he has had a disappointing follow-up to his first Pro Bowl season in 2014. He tore his ACL in 2012, and he missed a chunk of last season after having surgery for a hernia. Kelce returned from both injuries in impressive fashion, so it's too early to call him injury prone, or injury-damaged.

Drafting a player to replace Kelce is probably out of the question at this point, but the Eagles could certainly use a player who can play multiple positions along the offensive line, including center. Seumalo will presumably be given the opportunity to win the starting job at LG during training camp.