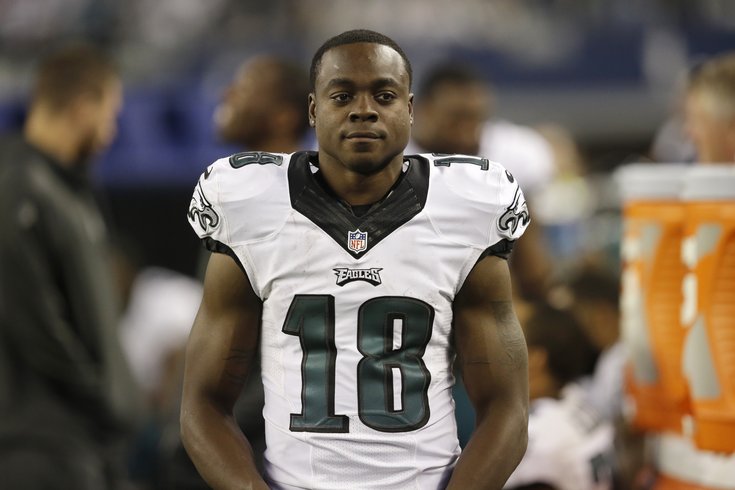 Maclin has a lot of leverage over the Eagles. He knows they're going to have to pay him bigtime dollars to keep him on their roster, because they are otherwise thin on the outside. Opposite Maclin, Riley Cooper had a dreadful 2014 season. Cooper made a number of big plays in 2013, but was a big play no-show in 2014. In 10 of 16 games last season, Cooper averaged less than 10 yards per catch, and from a pass catching standpoint, he was arguably the least efficient starting wide receiver in the league.

Player agents can begin speaking with teams today during the "legal tampering" phase of free agency, and many Eagles fans are beginning to get nervous about the prospect of Maclin hitting the open market. After all, every year there's some dumb team out there that grossly overpays for a free agent wide receiver. This year, with limited options available, that guy could very well be Maclin. However, if you look at the history of some of those bad deals, the team losing their wide receiver got similar or better production from the player who stepped into their role the next season:

Of course, every situation is different for the team losing its wide receiver in free agency. Some are better equipped to handle the loss than others. In the Eagles' case, Jordan Matthews had a very impressive rookie season, falling just 40 yards short of DeSean Jackson's rookie record of 912 receiving yards in 2008. However, he spent almost his entire rookie season operating out of the slot. To be determined if the Eagles would want to increase his role by moving him outside going forward.

The "other" rookie WR was of course Josh Huff. Rookie mistakes plagued Huff's rookie season, but his talent is fairly obvious. If he can cut out some of the mental lapses and become a more polished receiver, Huff has a high ceiling.

If the Eagles feel that they aren't yet ready to roll with what they currently have on their roster, wide receiver is a much more fixable position in the NFL than many others. There always seem to be a number a decent "next-tier" options in free agency, and recent draft classes have had many attractive options at WR as well. In 2014, 12 rookie wide receivers had at least 500 receiving yards:

The 2015 draft class at wide receiver is considered to be very strong once again. NFL.com's Daniel Jeremiah, for example, thinks the 2015 wide receiver class is a very safe play this year:

"It seemed like it was boom or bust, and we can go through the Mike Williams, Troy Williamson, Darrius Heyward-Bey and all the risk involved," Jeremiah said on NFL Network's "Path to the Draft." "Then last year, we hit on all these guys. This year, I think they're some of the safest players in the draft, which you never would have said before.

"These guys are clean players," he said. "They've got high character and check every box."

Recent reports suggest the Eagles and Maclin aren't as close to a deal as they were previously thought to be:

Updated info on Maclin: Deal was close for some time, not as close recently and he's getting nibbles. #Eagles have to up ante w/ McCoy leak.

Elsewhere on Eagles front, I really believed Jeremy Maclin would be re-signed or at least close by now. Not the case. Work to be done there.

Mr. @caplannfl on SportsCenter talking Maclin-Eagles deal: "That thing is not close."

Would the Eagles be better off with Maclin than without him? Unquestionably. Would it be unfortunate to open up yet another hole on a roster already full of them? Again, unquestionably.

The Eagles want to sign Maclin, and Maclin wants to stay. However, is it worth paying a receiver with two torn ACLs to his credit and only one 1000+ yard season that occurred in the new coach's high octane offense, in the ballpark of, oh, say, $10-12 million per year?

Jeremy Maclin is good. Is he THAT good? If that's the price tag, the Eagles might be better served to let Maclin go play elsewhere.