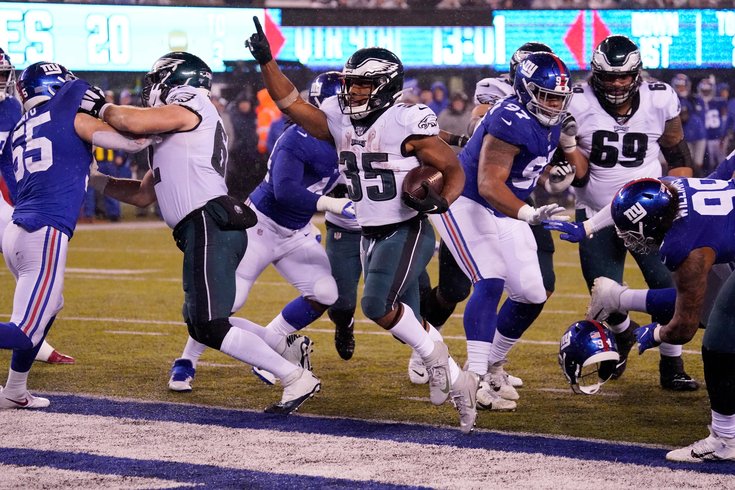 5'6 running back Boston Scott logged big back snaps on Sunday.

Analysis: After Brooks was carted off with a shoulder injury, I can't recall noticing Pryor much the rest of the way, which is a good sign, without having re-watched the game yet. Brooks' and Lane Johnson's collective availability for Sunday will be a huge storyline all week long.

If there was any decision to be made on Johnson playing or not playing against the Giants, the Eagles obviously made the right one, with the benefit of hindsight.

Analysis: After Sanders left with an ankle injury, Scott played the entire rest of the game, with the exception of getting spelled for one snap by Howard.

While Howard was "cleared for contact," clearly the Eagles do not feel that he is 100 percent healthy, or they would have used him in clock-killing time late in the game.

Analysis: Arcega-Whiteside was a limited participant in practice on Wednesday and Thursday, but he did practice in full on Friday. He only got 17 snaps, and did not get a single target. That's concerning.

Analysis: A week after playing over 90 percent of the team's snaps (a career best), Goedert did not come off the field for a single snap against the Giants.

Analysis: The Eagles' pass rushing effort was obvious last night, but perhaps the most encouraging development was the play of the non-Fletcher Cox defensive tackles. Jernigan played with great energy and disruption, and I can't believe Rush only had 14 snaps, as I seemed to notice him clogging up the line against the run several times.

Analysis: This is now the second straight game that Bradham has looked more like the 2017 version of himself.

Analysis: All the young corners, particularly LeBlanc and Jones, had their moments against the Giants, but none was bigger than Jenkins' forced fumble on Daniel Jones.