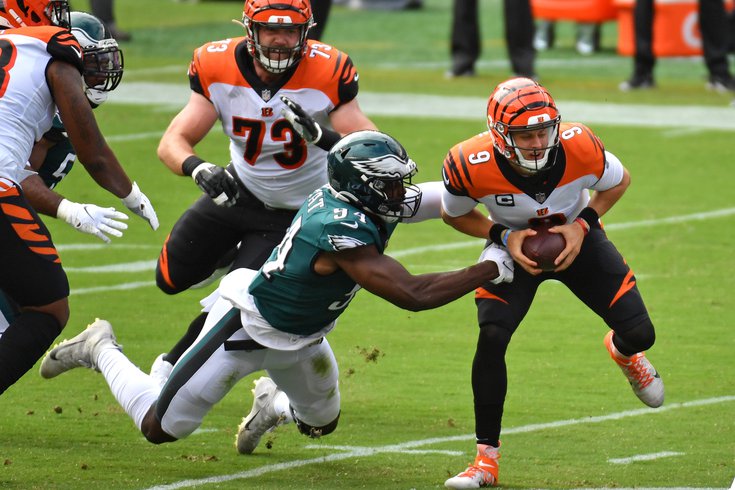 Josh Sweat has been a rare bright spot so far in 2020.

In their Week 3 tie against the Cincinnati Bengals, the Philadelphia Eagles played 91 snaps on offense, and 72 snaps on defense. Let's just get right to the snap counts.

Analysis: Peters had a brutal afternoon, as he got roasted repeatedly, mostly by Carl Lawson. He came out late in the game with what looked like a lower body injury. His status for Week 4 is to be determined later this week.

Hurts got his first opportunity to touch the football in the NFL. He had 2 runs for 8 yards. He also fumbled, but was able to get it back.

Analysis: The expectation was that Sanders would get one of the heaviest workloads of his young career, given Wentz's struggles and the fact that the Bengals' run defense stinks. He got 18 carries, which isn't necessarily a low number, just generally speaking, but it wasn't enough, seeing as the Eagles had 91 offensive snaps. There's an argument to be made that he should have been up around 25-30 carries.

Analysis: Welp, that didn't take long. Jackson is already missing time with a hamstring injury. The idea that the Eagles were heading into this season trusting that Jackson would remain healthy always felt like an obviously ill-advised one, and he has been less productive than expected when he has actually been able to play.

Arcega-Whiteside barely got on the field with the Eagles' top two receivers out, and even Richard Rodgers was getting snaps over him... at wide receiver... and in the red zone, which is where his skill set is supposed to be a positive.

Analysis: Goedert could be out a while with an ankle injury. Personally, I'd have rather seen what Noah Togiai could have done rather than watch Rodgers get any snaps at all. ¯\_(ツ)_/¯

Analysis: For the first time this year, the defensive line played really well. They combined for 6.5 sacks and 15(!) QB hits. The team had 8 total sacks and 18 QB hits. A look at the DL stat sheet from Sunday:

It's at least good to see young guys like Sweat and Barnett making some plays, and Cox reminding us that he still has the ability to dominate at times. Graham is also a veteran worth keeping around for the re-build, if that becomes the direction of this team.

On the downside, Hargrave has played 57 snaps so far this season, and he has not yet registered a single statistic.

Analysis: We'll see if this is a week-to-week thing, but Edwards obviously out-snapped Riley by a wide margin. A week after giving up TDs left and right to Tyler Higbee, Gerry appeared to have another game to forget.

Analysis: Like they have the last few years, Eagles defensive backs started dropping like flies on Sunday. There were times in which both Slay and Maddox were out, and guys like Trevor Williams had to fill in. After injuring his ankle, Maddox tried to run on the sideline to get back in the game, but it was clear just watching him struggle not to limp that he wasn't going back in. He shouldn't be out for an extended period, but his status for Week 4 could be dicey.

The Eagles opened as 3.5-point underdogs. That line has already jumped to 6, via TheLines.com.