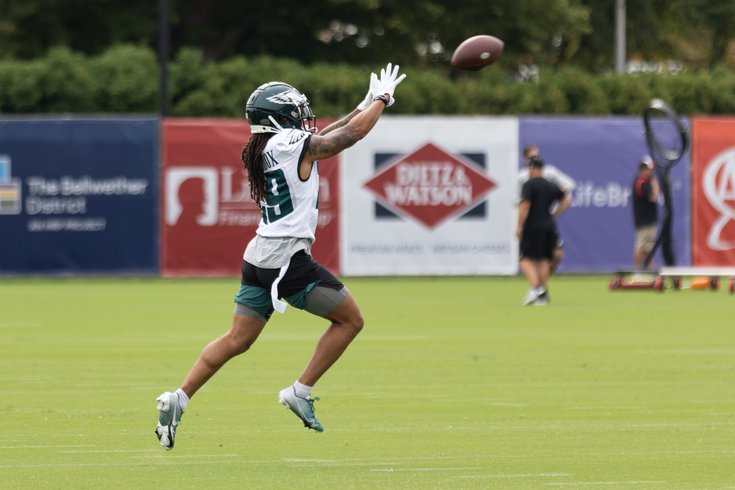 Eagles training camp is in full force. The Birds kicked off their camp practices this past Wednesday and after three sessions, the team's defense looks strong. The franchise's front office made some key moves to bolster Jonathan Gannon's defense, particularly with the signings of Haason Reddick and James Bradberry, as well as the drafting of Jordan Davis and Nakobe Dean.

One Eagles defender whose stood out to me, however, has already been on the team for a bit. Slot corner Avonte Maddox, going into his fifth season in midnight green, looks to be on the rise as part of what should be one of the better cornerback trios in the league between Pro Bowler Darius Slay, Bradberry and then himself.

Props to Maddox on winning this ultra-prestigious award and a great first week of camp.

(There is no hawk emoji, so I went with an eagle, which is obviously fitting)

Maddox has had a nose for the ball in camp. After modest turnover numbers in the first four seasons of his career (two interceptions as a rookie in 2018, none in 2019 and 2020, one last season), he's been seemingly everywhere when the first-team defense has been out there getting 7-on-7 and 11-on-11 work. The top highlight play of camp so far is unquestionably the pick Maddox made off Jalen Hurts on Friday. Targeting Maddox's BFF and former roommate Dallas Goedert, Maddox soared through the air, elevated and jumped the pass for a great interception. Generously listed at 5'9", the ability to get the ball at a high point like that with the 6'5" Goedert behind him was incredible.

It's an encouraging sign for sure. Maddox, thrust into a role at safety as a fourth-round rookie in 2018 due to injuries, surprised people with his effectiveness there. He was miscast as an outside corner the next couple of years before finally settling into an ideal spot as a nickel CB in 2021.

Maddox was rewarded for that performance with a three-year contract extension in the middle of last season, totaling $22.5 million with $13 million guaranteed. I'm not here to say that deal is a bargain given the plethora of veteran slot corners on the market available every offseason, but if you have good, homegrown players on your squad, teams would be wise to keep them. Maddox increasingly fits that billing.

Maddox spoke with the media following the Eagles' practice on Saturday. Here are some things he had to say ahead of the 2022 campaign...

On his big training camp interception:

"Just play recognition. I mean, I seen Jalen was dropping back... down and distance was a little bit longer, so I know I can give him a checkdown route, so I just peeked backside and seen Dallas coming across and I started sinking. I knew [Hurts] probably wouldn't see me because I was a little bit lower, ya know. I had to climb the ladder and go get it, so just a good play on my behalf."

On baiting Hurts on the play:

I was a little bit lower to the point that he couldn't see me... They're motioning people in and out and things like that, moving pieces are going on and the defense is changing... I just baited him a little bit... I saw him flare it out and I took one step up, knowing I got the leverage on that guy and I'm just looking cross field to see what's coming back to me and, ya know, just sinking and making a play on it.

Some teams, ya know, like to slow jog then speed up or speed up then slow down... That's one thing I watch during film: 'How do they motion? What am I doing during this motion or that type of motion?... If we're in this, what am I doing to communicate with the safety?' I'm looking cross field to see if they're 2x2 over there or what side the back is on. A lot of things, I'm always ahead of the game. Once I break the huddle, I kind of scan the field... I look for the receiver in the slot and that takes me where I'm supposed to go for the most part.