Jalen Hurts Watch 2022: Eagles QB has another mixed bag of a day at training camp 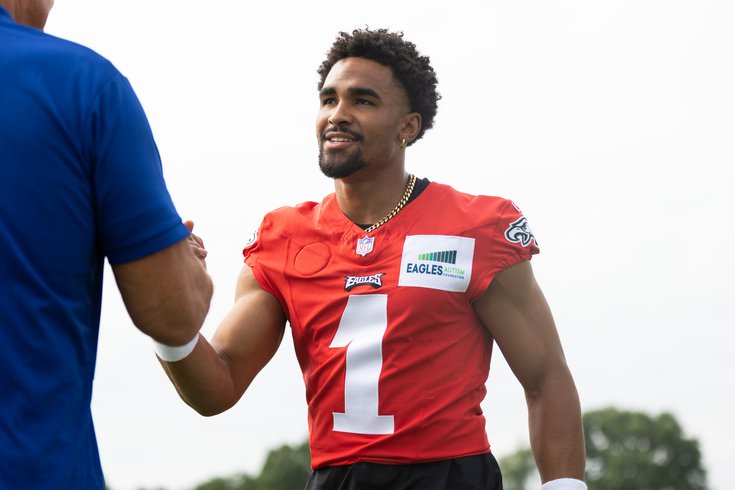 Jalen Hurts enters the field during Eagles Training Camp at the Novacare Complex in Philadelphia, Pa. on July 27, 2022.

The Eagles completed their third training camp practice on Saturday down in South Philadelphia. After an excellent first day of camp when he got into a true groove, Hurts struggled as a passer on Friday. His practice on Saturday, unfortunately for the Eagles' offense, continued on that Friday trend. Like I did for those two practices, I tracked every ball Hurts threw during team play on Saturday. Here's what I saw from the third-year quarterback:

• Play 1: Hurts hands it off and it's a huge Miles Sanders gain (it's hard to really evaluate running plays in these ultra-light practice conditions). After taking a lot of second-team reps on Friday, Sanders was running with the 1s on Saturday and looked the part of a top back.

• Play 2: It's a quick underneath throw to the left for Hurts. Nothing special, but, hey, it's a completion.

• Play 3: Hurts dunks it over the middle as Dallas Goedert breaks from the left side of the field. This design should be able to lead to chunk plays for the Birds during the season given Goedert's ability to break tackles and rack up that YAC.

• Play 4: After a false start... Hurts hits A.J. Brown to his right, as the new Eagles wideout comes down with the ball even with tight coverage. Great energy from Brown there.

• Play 5: Boston Scott could not have been more wide open in the left flat. Big yardage on that one.

• Play 6: Hurts rolls left and throws somewhat across his body for a bad interception that ends up in the hands of cornerback Andre Chachere. This was a similar vibe to an interception Hurts threw on Friday. What I will say in defense of Hurts is that I'm not sure he would actually attempt these types of throws in a game setting. There's no point in throwing the ball away in a July practice. Force it and give the receivers and defensive backs a real rep. He threw the ball away a good bit when nothing was there last season instead of making head-scratching bad decisions.

Among NFL starters in 2021, Hurts was slightly above average in interception rate at 2.1 percent, the same number as Kyler Murray and Matt Ryan (via pro-football-reference). Hurts needs to be better, as I've written at length over the last two days, but I don't think a play with this type of result is predictive of what will be seen in the regular season.

The Eagles do something new this training camp, switching from an 11-on-11 setting to 1-on-1 wide receiver vs. cornerback reps with rotating QBs. These are more "drills" than anything, but it came between concrete team play, so, why not, I'm including it in my grading. Here's how Hurts fared:

• Play 8: Hurts hits Jalen Reagor in stride streaking towards the right sideline. It was a crisp route from Reagor.

• Play 9: Hurts goes deep to Brown, but it's definitely an underthrown ball that new CB James Bradberry breaks up.

• Play 10: John Hightower gets this rep with Hurts and the QB is way, way off the mark. Hightower didn't have a chance on this one.

• Play 14: It's a read option run to Sanders. The Birds are really hammering home that he's RB1!

• Play 15: Play-action time. Hurts goes for Smith towards the left sideline. The ball is once more underthrown. It should've been an interception, but the ball went right through the defensive back's hands.

• Play 16: Hurts rolls right and not much is open. He waits and throws to Goedert, who makes a sweet diving catch.

• Play 18: The Eagles dial up a tight end screen. Hurts hits Goedert where he needs to be, but the defense sniffs it out immediately for a loss of yards. Akin to the way I talked about Goedert on that little dunk route, I'm very much in favor of the Eagles running these type of TE screens for him come the regular season given his physicality and run-after-the-catch ability.

• Play 19: Tough catch from Brown with sticky coverage from Darius Slay. Good on Hurts for that one.

• Play 20: Hurts targets Brown against Slay again. Brown hauls it in. Clean all around.

• Play 21: Hurts throws left to Smith. The ball is a tad, tad high, but Smith makes a great catch.

• Play 22: The Eagles air this one out. Hurts drops back and targets Quez Watkins deep down the right sideline. The throw looks perfect, but Watkins doesn't come down with it, a little out of range of his hands. Head coach Nick Sirianni was not happy with Watkins on this one. "THAT HAS TO BE A TOUCHDOWN!" Sirianni yelled at Watkins following the play. It was in an encouraging manner, but Sirianni's tone seemed to indicate that Watkins was dogging it a bit on that route and it cost what would've been the top highlight play of the day. I wonder how the opinion of Hurts shifts today if that play goes for a "touchdown," the beat writers tweet up a storm about it and Eagles fans get hype online. Breaks of the game!

• Play 24: The Eagles go fake screen right, tight end screen left. It looks smooth for Hurts and co. I have a few play types that get my football juices going. Shovel passes, wheel routes, flea flickers and "fake screen one side, screen pass on the other side" are all top tier for me. Perhaps I've just played too much "Madden" in my life. "Madden NFL 06" with Donovan McNabb on the cover on an old PS2 is basically the only video game I play these days.

• Play 25: It's a straight handoff to Boston Scott.

• Play 26: It's not a designed draw, but Hurts almost immediately tucks the ball and runs up the gut for a short gain.

• Play 27: The Birds go play action. Hurts steps up and finds Smith on a comeback route to the left. Nice job by Smith nabbing it. That's a plus for Hurts, as he gets into a little groove of sorts at practice's end.

After some backup QBs get reps, Hurts returns for his final 11-on-11 session of practice:

• Play 30: Hurts rolls right and the pass is deflected by linebacker T.J. Edwards. Edwards wasn't rushing the passer, more so hanging in the second level of the defense while Brown was the intended receiver farther back. Not a great throw, but a great play by Edwards, who has looked increasingly sharp in camp.

• Play 31: Hurts goes deep left to Smith. It's underthrown. Smith has a chance to make the catch, but Bradberry did really well in coverage there.

• Play 32: Much like the way I talk about it being hard to evaluate the running game in practice settings where the players aren't even wearing pads, it's tough to praise or critique pocket movement. Nevertheless, Hurts maneuvers around well enough and dumps it off to the QB's left.

• Play 33: The Birds' defense blitzes! Once more, there's that pocket movement from Hurts. He steps up and hits Goedert by the sideline for a gain of 15-ish yards. For as uneven a practice as Hurts had, it's good to at least ends things on a positive note.

I'll wrap up by saying this... Perhaps more credit should be paid to the Eagles' defense. For the way Hurts has struggled at times, Gardner Minshew's last two days have been even worse and that pattern has trickled down to guys like Reid Sinnett and Carson Strong getting third- and fourth-team reps under center. I'm not saying this is the 2015 Denver Broncos' defense, but the unit should be a big strength in 2022.