Eagles training camp: Birds signal that they have confidence in safety Marcus Epps 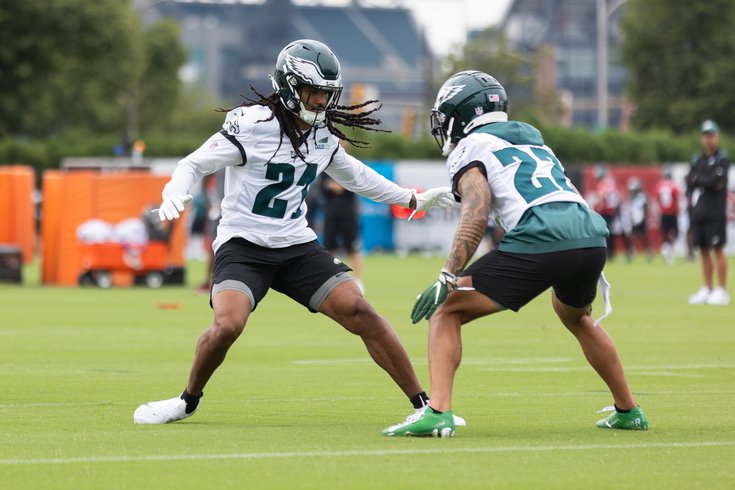 Following a splashy offseason, the Eagles have, at least on paper, a strong and well-rounded roster. The biggest hole appears to be at the safety position though. With just five selections in this year's NFL Draft, the Eagles didn't add a safety there. They re-signed vet Anthony Harris who shares familiarity with Jonathan Gannon from their days together in Minnesota. He'll get a starting nod. The other guy who looks like he'll also be starting at safety is 26-year-old Marcus Epps.

Epps has started eight games in Philadelphia over the last two seasons. The Eagles are always quick to build up Epps when the opportunity presents itself. Defensive coordinator Jonathan Gannon did just that during his training camp press conference on Friday.

"The first thing I look for in a safety is reliability. He's very reliable, smart, tough," Gannon said about the fourth-year player. "He's got a very unique skillset that you need, in my opinion, to play safety in the NFL today. In 2022, the safety position looks different than when I got in the league in 2007. You got to be able to cover. You got to be able to tackle. You've gotta have ball skills. You gotta play zone. You gotta process. That's a thinking position, so he has all those tools."

That's high praise for someone who was a sixth-round pick three years ago and has minimal starting experience.

Eagles fans wanted the team to upgrade the safety position this offseason. This is a city where Brian Dawkins became a hallowed figure. They're always going to want safety talent. The Birds didn't sign five-time All-Pro Tyrann Mathieu when he was available, as the star safety eventually made his way to New Orleans. They didn't draft someone like Cincinnati's Bryan Cook on Day 2 of April's draft when the chance was there. The front office and Gannon appear high enough on Epps that they were okay with neither of those moves coming to fruition.

Epps' production has been pretty decent when he's played. He had two interceptions, four pass breakups and 47 tackles while playing 38 percent of the Eagles' defense snaps across 14 games in 2021 (via pro-football-reference). Come 2021, he played 48 percent of those snaps in 16 games, snagging one interception while totaling five pass breakups and 62 tackles. His presence has been felt so far in training camp too. He had a great red zone interception off Jalen Hurts on Wednesday. The Eagles' secondary easily had their way with the team's offense during Friday's practice with Epps being a factor there as well.

A talented cornerback group should make Epps' life easier this season. This is the best that unit's looked in Philly since the early 2000s. Darius Slay played like an All-Pro in 2021, James Bradberry was a Pro Bowler 2020 and Avonte Maddox is one of the better slot corners in the league. Playing off those dudes should simplify things for Epps, confidently knowing that they can handle their assignments.

There's no better time in the NFL schedule for optimism than the summer. The Eagles are taking that view of Epps and this safety group into the fall.