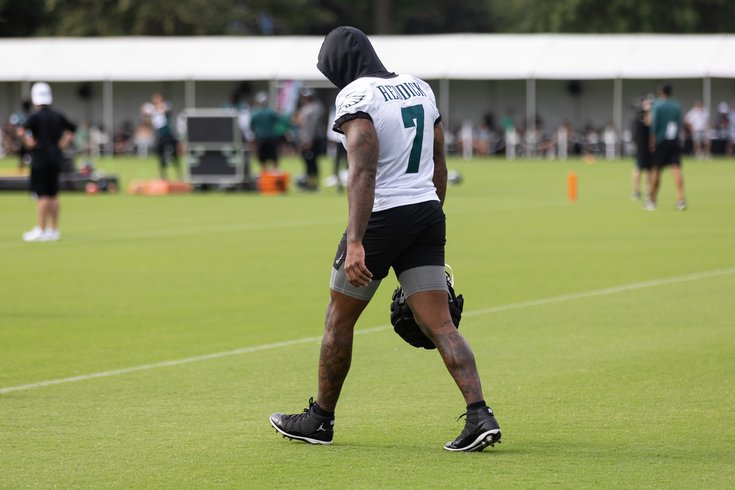 Haason Reddick, the Camden native and former Temple walk-on, is in Philly for his first training camp with the Eagles. He's a fierce pass-rusher who can disrupt a QB's game. From the short amount of time in OTAs and practices that have been open to the media, however, Reddick has been dropping back into coverage a healthy amount in defensive coordinator Jonathan Gannon's scheme as the team's SAM linebacker. It's raised eyebrows.

Over the last two seasons, Reddick has 23.5 total sacks. The only players in the league to match those numbers are T.J. Watt (37.5), Myles Garrett (28), Trey Hendrickson (27.5) and Aaron Donald (26)  (via Stathead). The dude can get after the quarterback. I am no NFL defensive coordinator, but if I was for some strange reason, I'd use Reddick almost exclusively as a pass-rusher aside from an odd play or two here and there.

"That's what I love about camp. We're in the process of figuring those things out. Not just with Haason, but everybody," Gannon said to the media on Friday when asked about Reddick's usage. "It's a process that we take... Let's kind of see what we like, what we don't like, what this guy's good at, what he's comfortable at, what we need him to do, what looks good, what doesn't."

The topic of Reddick was brought up once again during Gannon's Friday morning press conference.

"He's a really good cover guy," the defensive coordinator said when asked when it would be advantageous to not use Reddick as a rusher. "Sometimes, that's a matchup-driven thing... Like all overhang players, there's a reason why we do that. Flexibility within the defense, depending on what the offense does, that's the kind of space you want to play and it helps his teammates win some 1-on-1 battles."

Gannon used both 3-4 fronts and 4-3 fronts in his first year in Philly. Versatility is always a plus, but some of the Eagles' personnel feels better for a 4-3 scheme. Fletcher Cox had a down year after thriving as one of the best defenders in the league as a primary three-technique defensive tackle under former defensive coordinator Jim Schwartz. Brandon Graham turned into an excellent player under Schwartz. Even Reddick could be used as a stand-up pass-rusher on the edge while having three down linemen next to him.

Perhaps Gannon is just playing coy. It is only July after all. It serves his defense no purpose to flat out say, "This guy will never drop back in coverage. He will rush the passer every play. Opposing offenses, plan accordingly." The Eagles know Reddick can rack up sacks and pressures. That's why the organization handed him a contract worth $30 million guaranteed this offseason. You don't pay a guy that money just for him to hang and defend shallow crossing routes. Seeing what else he can bring to the table makes sense, but with a defensive coordinator like Gannon who always wants to mix up fronts and looks, it's going to rile up Eagles fans who want to see Reddick get after Dak Prescott and Carson Wentz relentlessly.

"I'm a versatile player. I do believe I'll be doing some of that," Reddick said after Friday's practice when asked about being used in coverage. "At the end of the day, man, I'm just here to help the team get better, do my part, ya know, whatever I'm asked to do, I'm gonna do it because I can do it and I'm going to try to go out there and play the best ball that I can."

Questions continued about his role. Being asked how him dropping back helps the team, Reddick said, "Another big body out in space that can make plays, ya know, check downs, anything gets checked down... Like I said, I've got a bit of bigger body, go hit the ball-carrier, try to knock the ball out, get it, help the defense get the ball and give it back to the offense."

I would think that it would be much easier for Reddick to cause turnovers when crashing into QBs than trying to strip a tight end or running back on a passing route, but I get what Reddick's saying. He's new. He's getting adjusted. He's learning a new system and it's not doing any harm right now. The pass-rushing opportunities will be there, but I just don't know if they'll be as plenty as they should be.

"Early in my career kind of prepared me for situations like this," Reddick said about dropping back into coverage being a difference from his quarterback-sacking ways. "I'm just taking what I already know and what I'm learning now and I'm gonna put it all together."

Again, it's early. Just as Eagles fans shouldn't be living and dying with daily Jalen Hurts updates, breathing fire about a linebacker's usage following the second day of training camp practice isn't worth worrying about just yet.