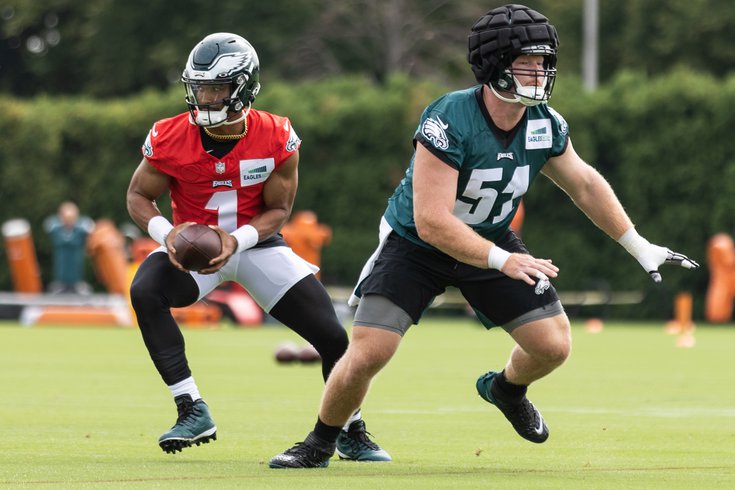 Jalen Hurts practices during Eagles Training Camp at the Novacare Complex in Philadelphia, Pa. on July 27, 2022.

Day 2 of Philadelphia Eagles 2022 training camp is in the books, and the Birds held another short, but spirited practice. Day 1 was 58 minutes. Day 2 was 75 minutes. Let's get right to the notes.

• Jalen Hurts and the first-team offense in general had a rough day. There were a lot of incompletions, some broken plays that led to scrambles, and some missed throws.

The lowlight of the day was a Hurts pass into a mess of defenders that was picked off by Avonte Maddox, who made a leaping grab. If I'm being honest, from my vantage point it wasn't really even clear who the pass was intended for. After practice, Jason Kelce, who did not participate in team drills, was asked what he thought of the offense's performance as a bystander. "Didn't look good," he acknowledged. He then noted that he felt that the offense got the best of the defense yesterday, and so the defense came out with more intensity today.

As a reminder, Hurts started 2021 camp very slowly and picked up steam as the summer progressed. We've only seen a total of 133 practice minutes so far, so it's way too soon to sound any alarm bells, but if you're the Eagles you probably would have preferred to see Hurts come out hot.

• Miles Sanders looks explosive. He had some juice of several of his runs, making sharp cuts and flashing acceleration. Sanders is a bit of a polarizing figure among Eagles fans, but there's little question that he is the most talented back on the roster, and it's not even close. Also, his thighs look thicker this year. Is that weird to say? #ThickerThighAnalysis.

• Haason Reddick dropped into coverage quite a bit today. Earlier this week I published the 25 things I'll be watching in training camp, and how much Reddick dropped was a part of that. Just because he is dropping into coverage often in camp doesn't necessarily mean he'll be doing a lot of that in games, and really, it would make some sense to have him work on his drops during camp, since we already know how well he rushes the passer.

Still... If Jonathan Gannon has Reddick dropping into coverage with regularity in real games, his best and most important skill will be wasted.

• Second-year cornerback Mac McCain had a nice day. He broke up a pass intended for Jalen Reagor that bounced off of McCain and landed in the arms of Davion Taylor for an INT of Gardner Minshew. Reagor slipped on the play. Later McCain had a pass breakup on a quick slant.

• Taylor did some nice things as well. In addition to his pick, he was all over Boston Scott in coverage on a pass that landed incomplete.

• Andre Chachere also picked off Minshew. If we're assuming that Anthony Harris, Marcus Epps, and Jaquiski Tartt will all be on the roster, Chachere is probably battling with K'Von Wallace for the fourth safety spot. Wallace struggled yesterday on a day that he was given first-team reps.

• James Bradberry had a nice pass breakup while covering Reagor. Seeing a theme here? The defensive backs dominated receivers today. Reagor in particular had a lot of passes come his way that ended up incomplete.

• Undrafted rookie free agent Carson Strong hasn't gotten much in the way of reps the first two days of camp, however, some time is carved out for the third- and fourth-stringers at the tail end of practice each day. Strong launched a moonball deep down the left side of the field to Britain Covey that was on the mark, but Covey could not make the play. Dude can rip it. He probably has the best arm of all the Eagles' quarterbacks.

• On Wednesday, someone stole my Gatorade out of the community fridge in the Eagles' media building. It's not like there were like 12 Gatorades in the fridge, as if the Eagles left them there for us. It was one singular Gatorade, on the door of the fridge, which means that someone opened the fridge, saw a Gatorade, and they were like, "Hmmm, someone probably brought this this from home, but screw you I'm thirsty," lol.

Zach Pascal missed the firsts practice of training camp with food poisoning. He’s out here today without a helmet but with a Gatorade. pic.twitter.com/vAS1eGMidq

Pascal was out on Wednesday with food poisoning, so if he walked over the Eagles' media house and stole my Gatorade, he probably needed it more than me, so I can forgive that.

• Throughout training camp, I'll have some occasional one-on-one interviews with other Eagles beat writers while the players are stretching and doing other boring stuff. They'll mostly be around 15 minutes long. Batting leadoff on Wednesday was Eliot Shorr-Parks of WIP. On Friday, I chopped it up with Jeff McLane of the Inquirer. Another fun convo, IMO. If that doesn't appear in the podcast list below, it will soon.

Listen below. And here's the iTunes link. Review, subscribe, etc.