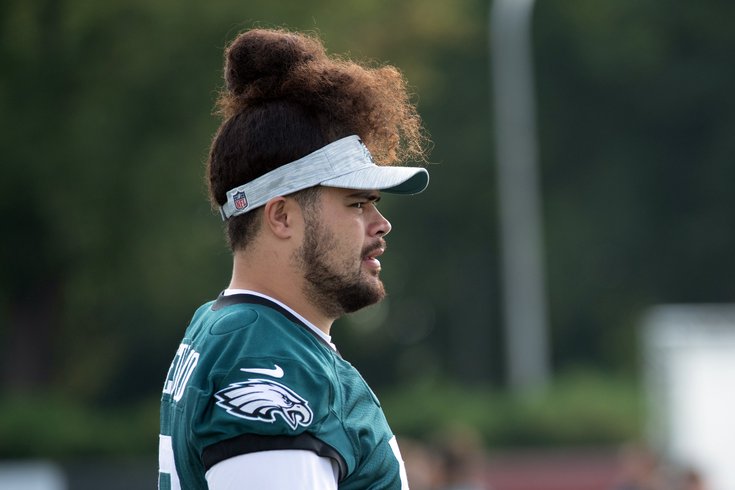 In our Eagles chat on Thursday, there were some questions that we could not get to in time or other questions we did answer but could use more color. And so, let's do a mailbag post to answer some of the overflow, as well as some commonly asked questions on Twitter and via email.

Question from Brian (via Twitter): Any thoughts on trying to move Isaac Seumalo? Tampa is without their starting center now, and maybe they are looking for depth players. Same with Andre Dillard and Green Bay. It's looking like David Bakhtari may be done, and the Packers could need help at tackle.

So for those of you who don't know what Brian is talking about, Bucs center Ryan Jensen suffered what looks to be a serious injury in practice on Thursday.

Buccaneers still are doing tests on the injured knee of center Ryan Jensen and hope to know more in next few days, but one source said this afternoon that it’s “not looking good”.

I'll translate: They likely already know his season is over. The Bucs aren't without options, though. They drafted Robert Hainsey (Notre Dame) in the third round of the 2021 draft, and he'll fill at center in place of Jensen, for now. If the Bucs decide they need to look for help elsewhere either for a starting center or more iOL depth, the Eagles are a logical team to call, given their impressive number of experienced players along the interior of their offensive line, and their over-abundance of guys who can play center.

By my count, the Eagles have six guys who can play center:

Kelce, Jurgens, and Dickerson are pretty much untouchable, and Toth is injured, so he won't interest Tampa.

If the Bucs are interested in Seumalo as a starting center option, the Eagles shouldn't be shy about asking for a steep price. After all, Seumalo is currently their starting RG, and the Bucs are a Super Bowl contender in the NFC. If you're going to help them out, the asking price should be in the ballpark of a third-round pick, in my opinion. You can't just give away one of your starters to go start for a rival team for a Day 3 pick. I can't imagine the Bucs would bite at that cost.

Anderson would also make some sense, but probably only as a depth option for Tampa. We took a look at Anderson's 2021 season earlier this offseason, and I liked what I saw. Even as a bubble player, I'd be asking for something in the neighborhood of a fifth-round pick. The Bucs are a team with a small window to win another Super Bowl, so I think you'd shoot high on the hopes they're willing to mortgage a future asset to sure up an immediate need.

Meanwhile, in Green Bay, star LT David Bakhtiari is still having issues with an ACL tear suffered in 2020. In 2021 he played in the Packers' final regular season game, but had to come out after about a couple dozen snaps. He did not play in Green Bay's playoff loss to the 49ers. Just before the start of 2022 camp, he went on the PUP, and the Bucs have no timetable for his return. It's also worth noting that starting RT Elgton Jenkins is also on PUP as he continues to rehab an ACL tear of his own, suffered in November of 2021.

Would Dillard make sense for the Packers? Maybe. He is athletic with good feet, and he showed up to camp in outstanding shape this year. However, his finesse style of play is not going to be for everyone.

Question from PhillyRob: With the off-season acquisition of A.J. Brown, it seems like the club is the strongest it has been at WR1 and WR2 since DJax and JMac roamed the Linc. How would you compare the two duos?

DeSean is one of the greatest deep threats in NFL history, and Maclin was a steady player who averaged over 1,000 yards per season during a five-year stretch from 2010-2015 (with a lost season due to injury in the middle). Add in the slow but slick route-running, hands of glue Jason Avant, and the Eagles had themselves a really nice trio in the early part of the last decade.

DeVonta Smith, A.J. Brown, and Quez Watkins are an intriguing trio as well, but if you were to put them over DeSean/Maclin/Avant you'd be doing so on projection. The current group is young and new and exciting, but give me DeSean/Maclin/Avant for now.

Question from Office Linebacker: Out of Brandon Graham, Fletcher Cox, Jason Kelce and Miles Sanders, who's on the team next year?

I would rank them from most likely to least likely, like so:

Question from Michael K: Why do you think the takes on Jaquiski Tartt are so wildly different? Seems like some local media isn’t even sure he’ll make the roster, and most have him as first off the bench, while national media seems to paint him as the only star in the entire safety squad. What gives?

I'm unfamiliar with the outside opinions on Tartt, but I guess from a national view they make sense. I would imagine that most of those guys/gals know who Tartt is but have no idea who Marcus Epps is, and so they just assume Tartt will plug right in as a starter? Does that sound about right?

I believe that Tartt will compete for a role in the Eagles' defense during training camp, perhaps as something of a safety/linebacker hybrid or as a third safety, however, he is probably not a threat to take Anthony Harris' or Epps' jobs in the starting lineup.

We're talking about a player here who has missed 31 games since 2017 who signed for a little over a million dollars, in June.