What they're saying about the Eagles: Jalen Hurts speculation and A.J. Brown hype 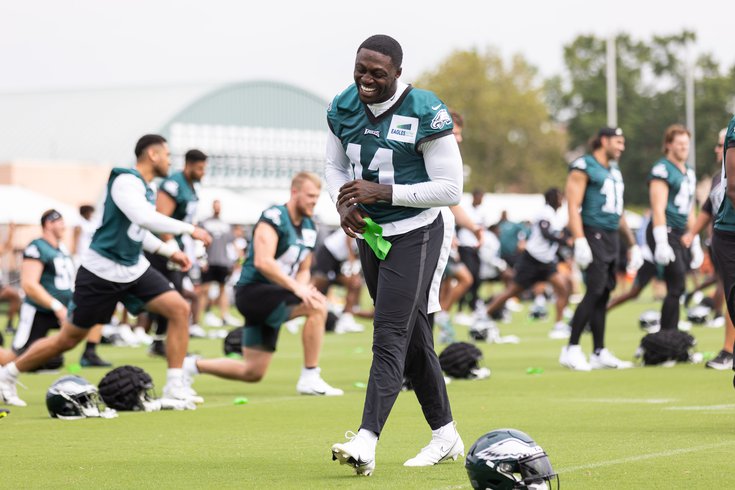 AJ Brown has been the talk of training camp as he works toward making his Eagles debut.

Wednesday's session at the NovaCare Complex was around an hour's worth of warmups and short-yardage 7-on-7/11-on-11 drills. The on-field work for the day was done around noon.

But that didn't mean there was any shortage of topics to cover.

General manager Howie Roseman spoke with the media beforehand and touched on the team's renewed emphasis on its interior pass rush, Brandon Graham is at "full go" following his recovery from last season's Achilles tear, A.J. Brown came to the defense of Jalen Hurts following a report that his quarterback was struggling in practice a couple of months earlier, and of course, there were observations from the practice itself.

Jimmy Kempski had his notes from Day 1, which you can check out HERE, and Shamus Clancy kicked off Jalen Hurts Watch, cataloging every Hurts pass attempt in camp, which can be seen HERE.

What is everyone else saying about the Birds?

The Eagles will have longer practices ahead, but for now, Wednesday's scenario was more of a setup for what's to come.

At the same time, the Eagles entered camp probably the healthiest they've been in years and intend on keeping it that way in the led up to Week 1.

Walkthroughs are no-pads practices generally held in shirts and helmets with players moving at half speed and an emphasis on teaching as opposed to physical reps.

The Eagles opened this summer’s camp Wednesday with a 58-minute ramp-up practice at the NovaCare Complex, and while most practices will be somewhat longer than that — usually 90-120 minutes — it’s an early sign of what we’re going to see over the next month.

“It’s all about player health,” [Nick Sirianni] said. “It’s all about how the numbers went down last year as far as the soft-tissue injuries. So our 3rd-day numbers tell us — not just on our team but throughout the league — that soft-tissue injuries shoot up that day, so that’s the reason for that. And that’s the same data that we’re following for the other three walkthroughs that we’re going to have.” [NBCSP]

One more time and then some more

Look, we've been going over this same point ever since the Eagles made the draft-night trade for A.J. Brown back in April. Hurts has his weapons and one of the best offensive lines in football protecting him. He's been presented with probably his best possible chance at success and the Eagles' own success hinges on that.

But until the ball finally gets snapped in games that count, that point is just going to keep getting reiterated again and again in the weeks to come, with Brown's "HURTS SZN' hat, Nick Sirianni's Hurts t-shirt, and some light contact drills giving it new life.

For the record, this isn't the fault of any writer, media personality, or fans just making conversation. If anything, it's a product of the offseason and how anxious this town is for football to finally get going.

This isn’t a coincidence. Sirianni is no longer a rookie coach, and he likely knows how his shirt would be interpreted. Brown picked the hat for a reason.

Sirianni rejected the notion that the Eagles feel the need to outwardly show support for Hurts or defend him from outside criticism, and Hurts’ mental toughness has never been viewed as an issue in Philadelphia. Hurts is a popular figure in the locker room, and the Eagles aren’t mincing words in their public backing of the quarterback. There’s no talking around Hurts’ importance to the team achieving its goals this season.

Go back to the expectations. No matter how much better the Eagles are at wide receiver or on defense, any optimism about their chances hinges on progress from Hurts. It doesn’t matter whether the Eagles were interested in Russell Wilson in March. And any quarterback options in next year’s draft are inconsequential to Jason Kelce in Year 12 or this roster, which is built to win. This is Hurts’ team in 2022, and the Eagles’ success will depend on Hurts becoming a more efficient passer. [The Athletic]

How long has it been since a wide receiver came to town with this much hype behind him as A.J. Brown?

The circumstances, of course, are different – T.O. arrived as the final piece, that true receiving threat for Donovan McNabb, to get the Eagles over their NFC Championship hump, while Brown was brought in to make a team still on the rise better – but with that being said, they've endeared themselves to fans in a very similar way.

From The Philadelphia Inquirer's Jeff McLane:

Sirianni and general manager Howie Roseman, to no surprise, downplayed expectations for Brown and the 2022 Eagles. This year’s team is coming off a playoff appearance in Sirianni’s first season and Roseman’s offseason moves seemingly upgraded the roster.

But the addition of Brown isn’t viewed by many as potentially getting the Eagles over the top as the trade for Terrell Owens was 18 years ago. There are some inconsequential similarities between the two receivers, but outwardly they’re different.

Owens was as brash as they come. Brown, as Smith described him, is “soft-spoken.” But clearly he hasn’t been afraid to speak his mind via phone when he feels it’s necessary.

There wasn’t social media, of course, when Owens came to Philly in 2004. A lot has changed in the interim. The Eagles drew 20,000 fans at Lehigh for Owens’ first practice. They are restricted to a few hundred at NovaCare.

What's the Mark Twain quote? "History doesn't repeat itself, but it often rhymes."