On Monday morning, Graham told WIP that the 2022 season won't be his last, and on Wednesday, in front of fans and media, he was out on the field moving. 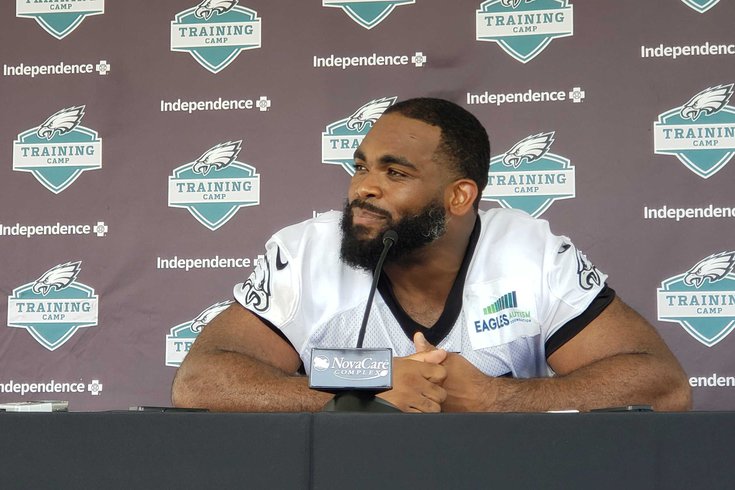 Months removed from a season-ending Achilles tear, Brandon Graham is back on the field and without any restrictions.

"I'm full go now," the veteran defensive end said Wednesday following the Eagles' first practice of training camp, and he's happy to be back, to be around his teammates again, and to build off of what was a surprise run to the playoffs last year.

"I'm so excited just being back with the guys," he said. "A new appreciation from being gone and now having another opportunity to be back out here with the Philadelphia Eagles. We have a good team. I want to take full advantage of every day we get to spend together because we got something special, but we got to put that work in every day. It's not just gonna come to us because of what it says on paper."

Graham suffered his Achilles tear in last season's Week 2 loss at home to San Francisco. It was a devastating blow to the Eagles' defense at the time, and at 33 (now 34), raised concerns about how much longer Graham would play.

But on Monday morning, he told WIP that the coming 2022 season won't be his last, and on Wednesday, in front of fans and media, was out on the field moving.

Granted, it was a very light practice — the team went for about an hour in short-yardage 7-on-7 and 11-on-11 drills — and we probably won't have a real idea of how effective Graham can be again until he's back in a game situation, but for now, he's just back. All smiles with that same infectious, upbeat energy he's been bringing to the Eagles for the past 12 years and counting.

"I tried to not just overwork myself because I was so excited to be back," Graham said. "It was just kind of one of them wrap-up days to get you back out here, get your feet wet of what training camp's gonna be, and just build on every day after this.

"I'm excited to be back out here. I'm not in any rush to leave the field because, as you know, time is flying. Once we get started with the season, it's gonna be over, and I'm gonna be going into [Year 14] so I'm just trying to enjoy every day."

After all, it was a long road back.

This isn't the first time Graham has missed major time due to injury. Way back in December 2010, his rookie season, Graham suffered a torn ACL and later required more serious microfracture surgery in that same knee. He was sidelined for all but three games that next season.

The recovery, he said, was brutal. He was off for two months with no weight bearing, losing a lot of strength in his legs that he had to build back up. And as a 23-year old at the time, he said he "didn't really know how to grind like I do now," which made the process harder.

Well over a decade later, Graham said recovering from the Achilles tear was still tough, but experience from that first injury and a number of other factors — from the skill and knowledge of the Eagles' training staff to the strength of his support group — made things easier.

"The hardest part is you got to lay in bed for almost two months, and then you gain a little weight, and then you gotta get back on your feet and got to work," Graham said. "It really tested me. Again, even from when I hurt my knee, I had a test during that time to of 'How bad you want it? You wanna come back, right?' You got to make sure that you eat right, you got to make sure when you come back, when it's time to go, you get ready to go, and man it was a battle.

"But I felt like I had a good group of people around me to help me keep my spirits up."

Now the focus shifts to the road ahead.

The Eagles head into 2022 with a lot of hype surrounding them and their renewed defensive front is a big reason why.

Graham is returning to the field healthy, Fletcher Cox and Javon Hargrave are back too, and pass-rushing "weapon" Hasson Reddick and rookie defensive tackle Jordan Davis are the new additions to the fold.

It's a crowded d-line, sure, but that's likely a good problem for the Eagles to have and a not-so-good one for opposing quarterbacks.

The latter may be true for Graham's playing time too, and perhaps his long-term future with the Eagles. He's still getting up there in age at a punishing position and can hit free agency after this season.

He's never appeared too worried about it though.

"I'm with whatever," Graham said back in May during OTAs. "For this being my last year as far as my deal, I'm just like, man... I just love the depth that we got. I'ma just show that I can still play and that I can help this team win."