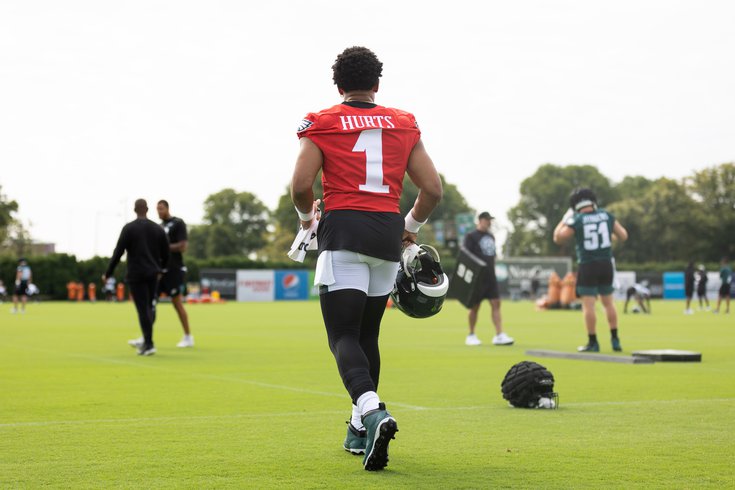 Jalen Hurts enters the field during Eagles Training Camp at the Novacare Complex in Philadelphia, Pa. on July 27, 2022.

As I did for the Eagles' first training camp practice, I charted how Jalen Hurts performed at camp on Friday. Hurts truly excelled on Wednesday, looking much improved over his 2021 self. On Friday, however, Hurts' performance was uneven, some of that falling on his shoulders and some of it because of poor play from the entire offense. I chalked up Hurts' first practice as a B+/A- type of day. Friday came closer to C+ territory.

Just as Wednesday didn't mean that Hurts was evolving into Russell Wilson before everyone's eyes, Hurts' Friday doesn't mean he's destined for a poor 2022 campaign. Let's get to it. Here's how every play unfolded for Hurts from what the media could see at practice:

Things began with 11-on-11 work around the 50-yard line of the Birds' practice field...

• Play 1: Hurts throws left to Dallas Goedert as the tight end breaks toward the middle of the field. Solid enough!

• Play 2: It's a read option-like play where Hurts hands it off to Boston Scott. It should be noted that Scott got most of the first team reps at running back on Friday. From what I saw, Miles Sanders only worked with the second team. Something to monitor.

• Play 3: A little play-action throw for Hurts, which the team did a lot of on Friday, as the QB hits Kenny Gainwell from the slot on a crossing route. Smooth.

• Play 4: Hurts throws it quickly to his right to A.J. Brown. The pass is broken up, but the corner back was all over Brown. I'm chalking it up as a pass interference play. Did the Birds sign Ricky Manning Jr. and I missed it? I won't count that incompletion towards Hurts' final "stat line."

• Play 5: It's another play-action throw that leads to a screen of sorts to Goedert. The throw is a bit off, but Goedert hauls it in on a sweet one-handed catch.

When Hurts and the first team next took the field, they were working from the 20-ish yard mark going out. This was a 7-on-7 setting.

• Play 6: Hurts throws left to Quez Watkins. It hits the third-year wideout right in the hands and he drops it. Friday's offensive lull isn't totally on Hurts. It was a rough look for all offensive units out there.

• Play 7: It's a sharp middle of the field throw to Jack Stoll. Stoll needs more experience as a pass-catcher to bring himself more versatility. He was used almost exclusively as a blocking tight end in 2021.

• Play 8: Hurts checks it down to Goedert. The first read wasn't there.

• Play 9: It's sticky coverage from Darius Slay on Brown and the ball is incomplete. There was some debate among the media members whether it was a drop by Brown or a pass breakup by Slay. I lean towards the former. Again, not the greatest day from everyone on offense.

• Play 10: Hurts throws right in between two defenders to Stoll. Stoll leaps and the ball hits the edge of his out-stretched hand, but he can't come down with it. Not ideal placement from Hurts.

• Play 11: It's a designed keeper right for Hurts. I expect to see plenty of that this season even as the Eagles' offense likely switches to a more pass-heavy attack.

• Play 12: Read option that ends up with Scott taking the handoff.

• Play 13: Another play-action pass for the Birds. Hurts' first read isn't there and he drops it off to Kenny Gainwell in the flat. It's, at most, a small gain.

• Play 14: The Eagles go slant right to Watkins. I couldn't I.D. the defensive back in the fast-paced nature of the practice and where the media was standing, but nice play from the DB to break things up. It could've been a better ball from Hurts.

• Play 15: Hurts tucks it on a keeper left. There are no defensive players around him and it's a nice chunk gain. It's all relative in a practice without full pads and tackling though. Hard to evaluate the run game at times in these conditions!

After the second, third and fourth-string QBs get their reps in, Hurts takes the field for the last bit of practice of the day.

• Play 16: A rarity with Hurts actually under center, Hurts rolls right and hits a beautiful tear drop pass to a streaking Brown towards to sideline. It was without a doubt his best throw all day. If Eagles fans want to overlook the iffy parts of this performance, focus on this play.

• Play 17: Hurts throws it to Brown on a quick slant from the left. These types of plays should result in big YAC gains for Brown and the Birds. Brown brings great tackle-breaking and run-after-the-catch ability to Philly.

• Play 18: This whole play is weird. It looks like a total miscommunication from everyone. Was it play action? Was it an RPO? I don't know. Hurts gets "sacked" though by free agent linebacker Kyzir White. For a team whose continuity should be a defining trait, moments like this should be minimized.

• Play 19: It's a play Hurts would certainly like back. Throwing off centered from his back foot, Hurts lofts a ball that hung in the air way too long. Avonte Maddox soars and picks it off in front of (his former roommate) Goedert. Props to Maddox, but Hurts could've done much, much better.

• Play 20: Things didn't end on a good note for Hurts on Friday. His final throw was wide of DeVonta Smith on a comeback route. The Alabama receiver didn't have a chance on it.

I caution Eagles fans to pump the breaks over concerns and hysteria. Here's how I'd tell them to try to evaluate training camp: enjoy the high marks and get excited about them. That's what summer hype is all about. Don't get too wild over the bad moments. Things can get ironed out and it's not worth the mental energy to fret over them right now.

The Eagles will be back at it at the NovaCare Complex on Saturday and I imagine Hurts and the offense will look closer to their form from Wednesday than what went down on Friday.