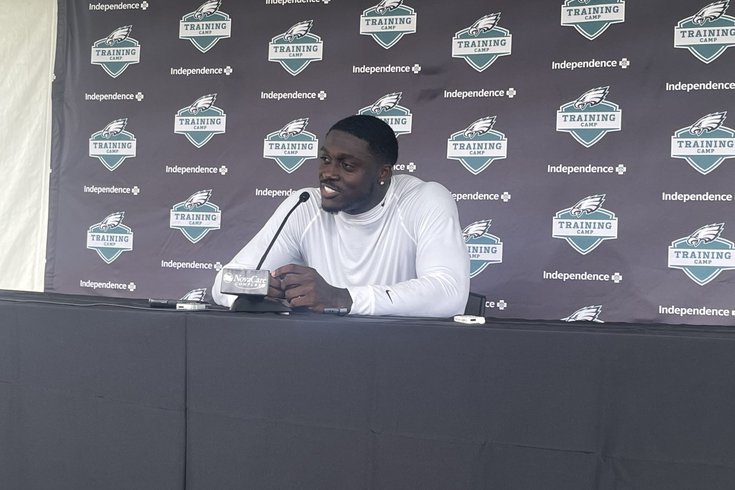 A.J. Brown defends Jalen Hurts after a critical report of his practice performance earlier this summer.

While Jalen Hurts looked sharp to open training camp on Wednesday, there was reported criticism of his practice performance earlier this summer. The report was from veteran Eagles reporter Derrick Gunn, who was told that Hurts had "a ways to go," and that third-year QB made many big practice mistakes without the media present.

That practice stuff about Jalen is fake . Y’all tweet and believe anything. Like how can he get sacked on 7on7 and there aren’t any rushers. I believe water is above us . Believe that too and make a article about that too . This app is crazy 😂

After Wednesday's practice, Brown spoke with the media about the controversy and why it was important for him to respond and defend his guy.

"It's important No. 1 because it's the quarterback of my team and he's my friend, No. 2, and the story wasn't true too. False narratives come out about quarterbacks and this and that. Guys got to understand, like, it's practice," Brown said. "Like today, it was an interception, it was a great play by the DB [Marcus Epps]... I'm not going to win every rep. He's not going to make every throw. And that's just a part of it... I just want to clear up the false narratives."

Later in post-practice press conferences, Hurts was asked about Brown defending him after that initial report.

During his time in Philly, Hurts has played things close to the chest with the media. He's not a super outspoken player, which is fine, given the way he seems to connect with other Eagles in the locker room and act as a leader. Hurts brushed those questions and concerns aside, though I'm sure he was well aware of the report. It's human to know those things, but I believe Hurts possesses such a level-headed demeanor that it won't affect his play an ounce.

Since he entered the league, Brown has been the player that has reminded me the most of Hall of Famer Terrell Owens in terms of physical profile and skill. His big-time trade to the Eagles only heightened those comparisons in my eye. If T.O. was around in the Twitter era, I'm sure he'd be going full "That's my quarterback" on the timeline too.

Brown doesn't hold back. I like that. If the Birds reach expectations this year, I expect a lot more buzz-worthy quotes from Brown and these reports about Hurts to fade from memory. After all, it's Hurts SZN right now for Brown: