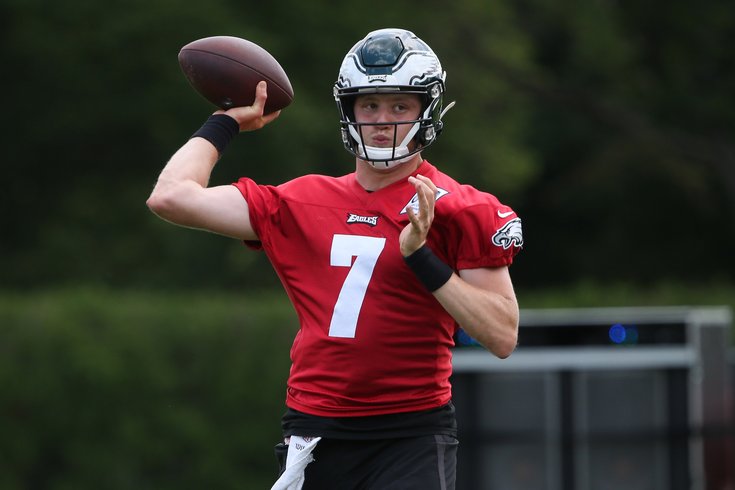 Nate Sudfeld flashes a little Blue Steel action as he dumps one off to his running back.

On the sixth day of Philadelphia Eagles training camp, it was Nate Sudfeld day, as the Birds gave their No. 2 a lot of additional reps, both with the first- and third-team offenses, as well as with his regular work with the second-team guys. In my opinion, it was his best day of camp so far.

It was a much shorter practice today. There were tougher practices on Monday and Tuesday, and the longest practice of camp will be on Thursday, so they had an easy one in between. As such, notes a not a-plenty today.

• To begin, it makes sense to give Sudfeld extra reps, particularly with the third-team offense, for two reasons:

• Sudfeld got plenty of work in the red zone today, where he made a lot of really nice throws:

• In the non-red zone portion of practice, Sudfeld had two other plays of note:

• Douglas has quietly had a good camp, by the way. No splash plays, but his coverage has been consistently good.

• Carson Wentz got a light day of work in. He had a nice deep ball to Nelson Agholor, who was covered closely. Agholor dove for the ball, and could not bring it in, but again, the ball was only where Agholor could get it, and Wentz gave him a good enough shot at it. Wentz also connected with Alshon Jeffery in the end zone during red zone drills.

• Jason Kelce got the day off. In his absence, Isaac Seumalo kicked inside to center, and Stefen Wisniewski stepped in at LG. After practice, Mike Groh noted that Wis has gotten plenty of reps at center, and they just wanted to get a few for Seumalo.

• We're now a week into training camp, and the next time Zach Brown stands out in a positive way will be the first. He has done nothing to earn a starting job so far.

• A week into camp, my top two candidates to be placed on IR with a hangnail are DE Shareef Miller and QB Clayton Thorson.

Thursday's practice notes should be much more fun.