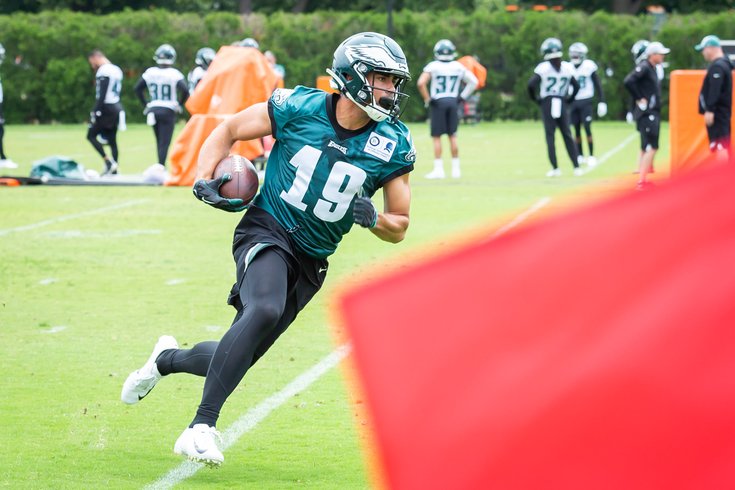 JJ Arcega-Whiteside is a rookie. And because of that fact, he is a little behind.

Not with the Eagles playbook (which he seems to be getting down pat). Not with NFL terminology, with developing physical skills or adjusting to life in the NFL. Arcega-Whiteside (JJAW) looked around the locker room and realized that he doesn't have nearly enough handshakes with his fellow teammates.

"It was funny," the Stanford product recalled. "[Nelson Agholor] had a handshake with Alshon [Jeffery] with Carson [Wentz] with DJax [DeSean Jackson], so I went up to him and said, 'Where's my handshake at?' And we made it up on the spot."

Arcega-Whiteside said the two practiced it twice, because hey, they might need to use it sometime.

Less than a day later, Arcega-Whiteside had a reason to use it. On the first play of live tackling team drills, Wentz looked for his wide receiver down the sideline but the ball was tipped. Somehow Arcega-Whiteside came down with it and turned on the afterburners, jetting his way to the end zone for a touchdown 75 yards away.

"All the guys were running down, [Zach] Ertz, Carson, running down to celebrate with me and I'm the rookie," Arcega-Whiteside said. "I saw that somebody's arm went up, usually when that happens the ball goes right in the air, and it just happened to go to me and after that all I thought about is 'run.'

The play was the highlight of a particularly intense day of practice for the Eagles, one that saw both JJAW and rookie running back Miles Sanders find the end zone for the first team offense.

"They're pretty good," cornerback Rasul Douglas, who was on the field with the first team defense said. "Every time we are out there we have to mind our P's and Q's because they can make a big play instantly.

"They made two big ones for touchdowns and I feel like those are the only ones we gave up but we can't give those up. We lost games like that last year, things came down to one play. We are trying to be different this year. They know they couldn't get it on us all day, so when they get something they are like, 'Yeah, we gotta celebrate, this might be our only time we get something on the defense.'"

Those words may qualify as trash talk — and there seemed to be plenty of that as the focus and emotion level were quite high during the last half hour or so of team drills.

"Everybody was a little more aggressive, a little more edgy," JJAW said. "It was more exciting. It took me a little to adjust to it because that's not how practices usually goes."

"It's definitely picking up," Douglas said. "You can see the competitive side come out, especially on a day like today when we go live."

For a lot of players, Tuesday was a more amped up version of practice. For some, however, it was just another day in the office.

"It really doesn't change anything for me. Everything is hyped up," right tackle Lane Johnson said. "Talk to [offensive line coach] Jeff Stoutland — every day is Red Bull day for me."

Johnson, even on days without live tackling, takes the full force of defensive linemen in the trenches (on days with pads, of course). He has been going up against Brandon Graham for about six years now and the two love going to battle.

"I always am going against him," Johnson said of his friendly rivalry with BG. "He will probably be the main reason why I can't remember things in 10-20 years from now."

Johnson, who was one of the first team offensive players sprinting 75 yards to the end zone to celebrate with Arcega-Whiteside, had another quip to make Tuesday:

"That was by design by the way, the tip."