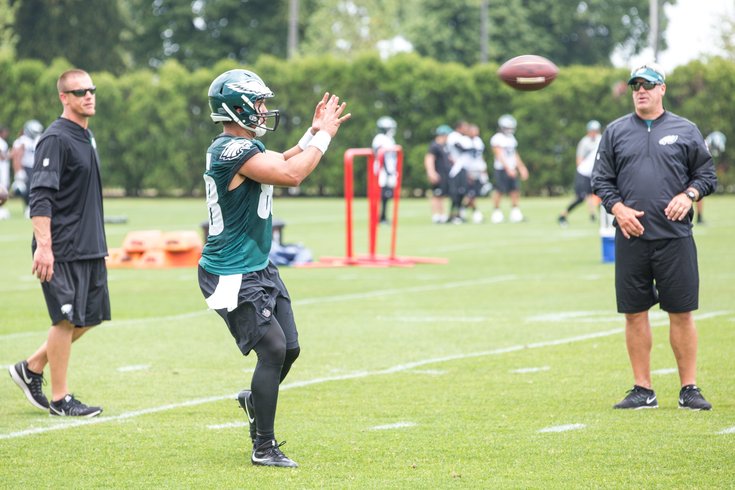 On July 24, there will be football again, as quarterbacks, rookies, and select veterans will report for training camp. Leading up to camp, we'll be taking a look at each positional group. Today we'll preview the tight ends.

First, here's a look at the depth chart at tight end:

Over the last two years, Ertz suffered early season injuries, limiting his effectiveness in the first half of the season. Also in each of the last two seasons, he turned up his production big-time late in the season.

While Ertz's production was less meaningful to Eagles teams that were already out of the playoff hunt, and something of a tease, he has shown that he can be a major weapon in the Eagles' offense if he can stay healthy.

There's also the argument that Ertz has not had quarterback consistency over the course of his career. In 2013, he had Mike Vick and Nick Foles. In 2014, he had Foles and Mark Sanchez. In 2015, he had Sam Bradford. And finally, in 2016, he had Carson Wentz.

There's something to that, as rapport between a quarterback and his receivers can take time.

If Ertz can be the receiver he has been late in the season, but in meaningful games, there's no reason he can't be a top-five type of receiving tight end in the NFL. It'd also be nice if he could make more of an effort in trying to get yards after the catch.

As for the rest of the bunch:

• Celek took a million dollar pay cut this offseason, reducing his salary from $4 million in 2017 to $3 million. A season ago, Celek signed a contract extension that essentially served as a pay cut as well.

Celek is easily still the best blocking tight end on the roster, although at the age of 32 he isn't quite what he once was in that regard. In recent years, Celek's receiving numbers have fallen off dramatically. In 2016, Celek averaged less than one catch per game and he did not score a touchdown for the first time in his career.

He is scheduled to count for $5 million against the cap in 2018. While he has had a long, productive career in Philadelphia, there's no way he will stick on the roster at that time at that number. If you're a Celek fan, enjoy him now, because this could be his last year in Philly, unless he takes another substantial pay cut once again next offseason.

• A season ago, Burton was one of the stars of training camp, and he still only played 29 percent of the team's offensive snaps in the regular season despite horrid play from the wide receivers. He is an excellent special teams player, and has flashed potential in the regular offense, but his hands can be an issue. In 2016, by my count, Burton had four drops on 37 catches, for a drop rate of 9.8 percent. By comparison, Jordan Matthews, who is often criticized (rightfully) for his hands, had a drop rate of 9.9 percent.

Burton's blocking and his hands will have to improve to see more opportunities in meaningful offensive situations.

• As for Denham and Brown, the Eagles really seemed to want Chris Pantale to give them a reason to keep him on the roster last season, but he could not. That serves as evidence that the Eagles could consider keeing a fourth tight end if someone wows them, but it's more likely that either Denham or Brown end up on the practice squad.

From a developmental standpoint, Brown is an interesting player. In 2016 at Shepherd University, Brown had 99 catches (led D2) for 1580 yards (second in D2) and 22 TDs (tied for second in D2) as a wide receiver. He has since bulked up a bit in preparation of playing tight end in the pros.