Eagles vs. Saints: Five matchups to watch when Philly has the ball 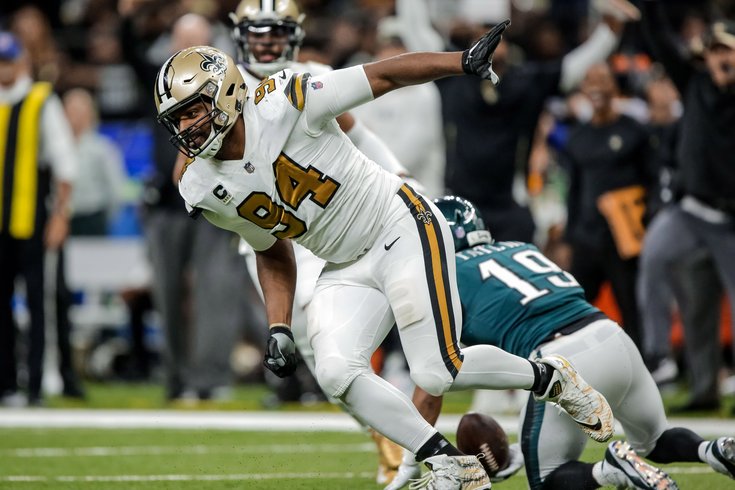 Cameron Jordan is yet another formidable pass rusher the Eagles will have to stop.

The Philadelphia Eagles will roll back into New Orleans this Sunday to take on a Saints team that embarrassed them to the tune of 48-7 back in November. Will things be different this time around?

1) The Eagles' rushing attack vs. the Saints' run defense

If you're thinking, "Well, the Bears have a great defense, while the Saints just had big leads, so nobody tried to run it on them," you're partially correct. The Saints faced the fourth-fewest number of rushes this season, which certainly helped their overall numbers, but they also only allowed 3.6 yards per carry, which was second in the NFL. They are indeed a good run defense, regardless of usually having the benefit of the lead in games.

Last Sunday, the Eagles were unsuccessful running the ball, as they had 23 rushes for 42 yards, for a paltry 1.8 yards per carry. They kept running it anyway, perhaps knowing that they had to keep the ball-hawking Bears defense honest.

Against the Saints, wanting to run the ball effectively is understandable, as the Eagles will surely want to shorten the game and "keep Drew Brees off the field." However, the Saints are far more susceptible to the pass...

2) The Eagles' passing game vs. the Saints' secondary

While the Saints' run defense is good, their pass defense leaves a lot to be desired. Some interesting pass defense numbers:

The yards per game stat is certainly a by-product of the Saints often holding big leads, with teams having to throw the ball often while playing catch-up. However, the Saints' leads don't account for the following numbers shown above:

When the numbers so clearly and obviously say that it's easier to move the football through the air than it is on the ground, I'd probably just go with what works. Obviously, getting into a shootout with Brees isn't exactly ideal, but the Eagles don't have to. There are many forms of controlling the football, and you can do so with a pass-heavy offense. You probably just shouldn't be running to the line of scrimmage after every play like you're Chip Kelly.

3) The Eagles' receivers vs. Eli Apple

The Saints' starting corners are Marshon Lettimore and Eli Apple. Lattimore is very clearly the better player of the two. Apple was acquired at the trade deadline by the Saints for fourth-and seventh-round picks. Before the trade, Apple of course played for the Eagles' division rival, the New York Giants.

While with the Giants, Apple was routinely beaten by the Eagles for big plays. Like on this TD to Nelson Agholor:

Or on the sideline throw to Alshon Jeffery that set up Jake Elliott's 61-yard field goal:

Or this long catch and run by Nelson Agholor:

Mike Groh was asked specifically about Apple, and he gave a predictably bland response.

"I think he's played really well since he's made the transition to New Orleans, so we have a lot of respect for Eli," Groh said. "He's made some really good plays. You can see him on tape and growing in confidence on that system."

On a side note, Apple grew up an Eagles fan, and he even seemed to be cheering for the Eagles in the Super Bowl, which pissed off a lot of Giants fans at the time. Read the responses to this tweet by Apple after the Eagles won it all:

Maybe Apple is another Howie Roseman sleeper cell agent that Roseman can activate like he did last Sunday with Cody Parkey.

4) Zach Ertz and Dallas Goedert vs. the Saints' linebackers and safeties

In the Eagles' Week 11 matchup against the Saints, Ertz had his lightest production of the season, when he caught just two passes for 15 yards. The Saints clearly attempted to take Ertz away from Carson Wentz, and they successfully did.

Fortunately for the Eagles, that will be harder for the Saints to do this time around, as there's a strong argument to be made that Alshon Jeffery, Nelson Agholor, and even Golden Tate are playing their best football of the season for the Eagles. Add in that Darren Sproles is now healthy and contributing in the passing game, and Ertz is no longer the obvious "We must take him away at all costs" target for the Saints' defense.

Many of the Saints' linebackers and safeties are better against the run than they are the pass. In the last four games of the regular season, the Saints allowed four TDs to tight ends. I believe the Eagles would be wise to get Ertz and Goedert involved early to start drawing attention away from their other weapons.

5) The Eagles' pass protection vs. the Saints' pass rush

The Saints were tied for fifth in the NFL this season with 49 sacks. Cameron Jordan led the team with 12 sacks, followed by Sheldon Rankins with 8. Jordan and Rankins may feel like child's play when compared with Khalil Mack and Akiem Hicks or J.J. Watt and Jadeveon Clowney, but certainly, this pass rushing unit is another formidable challenge for the Eagles' late-season MVP(s), their offensive line.