Eagles vs. Seahawks: Five matchups to watch when Philly has the ball 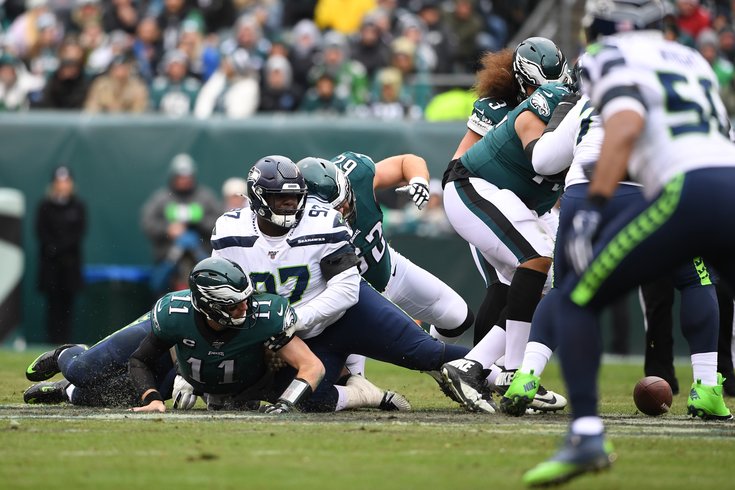 Two hands on the football, Carson.

The NFL playoffs are here, and the Philadelphia Eagles will take on a familiar foe in the Seattle Seahawks, a team that has owned them over the years ever since Russell Wilson became their quarterback.

For the playoffs, we'll do five matchups for each side of the ball. On Wednesday, we started with the "when the Seahawks have it" version. Today we'll look at when the Eagles have the ball.

1) Carson Wentz vs. his fumble-itis

In the Eagles' matchup against the Seahawks Week 12, Wentz had three fumbles that counted on the stat sheet, but he actually had five overall. Let's look at all five:

1) RT Andre Dillard trips over J.J. Arecga-Whiteside, who is running in motion, and he falls backward so badly that it causes the pass rusher to fall as well. Wentz clearly sees the defender, because he side-steps him and continues to look down the field. However, Wentz seems to completely discount the fact that the defender is going to get up and continue to try to make a play, which he does when he then strips Wentz and the Seahawks recover.

2) This one didn't count because there was defensive holding on the play, but Wentz gets his arm hit as he's loading up to throw, the ball comes loose, and the Seahawks recover. (Side note: Andre Dillard... Oof.)

3) Remember the amazing play Wentz made against Washington in 2017, when it seemed like he was sacked, but he emerged from a mass of bodies and ran for a first down? That was an incredible highlight reel play, but it may have done more harm than good.

There are times in which Wentz will extend plays and then make a play down the field, and certainly you don't want him to stop doing that. However, there are times when he has to realize the play is cooked, and the priority should be on protecting the football. This example below is the latter. Wentz is wrapped up, and this play is done, but he's still trying to make a play. He fumbles, but is lucky to get it back.

4) This was just a rare odd play call by Doug Pederson on a 3rd and 3. I don't fault Wentz here.

5) And finally, I didn't even remember this one, but Wentz and Miles Sanders had something of a careless exchange on a two-point conversion (hence, not showing up on the stat sheet), after a garbage time TD with seconds remaining in the game.

Anyway, Wentz's fumbling issues this season are well documented, but they were at their peak against the Seahawks Week 12. I guess I just went a long way to say that you can be 100 percent certain that Seahawk defenders are going to be pawing at the football whenever they get close to Wentz, and he has to make sure he keeps two hands on the ball at all times, with a tight grip. The Eagles cannot afford careless turnovers.

I don't believe that the moment will be too big for Wentz to handle. He has played in championship games in college, and won them. He's also a smart quarterback who has grown by leaps and bounds as a leader this season, and has put the team on his back in what were essentially four quasi-playoff games just to get here, albeit against bad teams. But the neophyte quarterback record is what it is, and it's worth noting.

On Sunday, Russell Wilson will make his 14th start in the playoffs. That's almost a full season's worth of games, and he's 8-5 with a pair of Super Bowl appearances. There is no question about his readiness for a wildcard round game. While I believe that heightened stakes will bring out the best in Wentz, that remains to be seen.

3) The right side of the Eagles' offensive line vs. whoever lines up for the Seahawks on that side

There's a whole lot of uncertainty on the one side of the line when the Eagles have the ball, on both sides of the line of scrimmage. Let's start with the Eagles.

To begin, will Lane Johnson play? If he does, he's not going to be 100 percent. He would play RT (duh), and the Eagles said that Halapoulivaati Vaitai will play RG.

If Johnson doesn't play, then Vaitai will play RT, and Matt Pryor will play RG.

In other words, Vaitai will have to prepare this week both at RG and RT, and he won't know what position he'll play until the status of Johnson is known. If it were up to me (it's not), I would just prepare for Pryor to play RG, no matter what, and Vaitai would be my RT if Johnson can't go, for three reasons:

But again, I'm not in charge, and Jeff Stoutland knows his group better than I do.

Of course, there's always the possibility that the Eagles already know whether Johnson is going to play or not.

On the Seahawks' side of the ball, it is unknown whether or not DE Jadeveon Clowney (core injury) will play. Clowney did not play Week 15 or 16, but he did give it a go Week 17 against the 49ers, with some discomfort. He did not practice on Wednesday.

4) The Eagles' rushing attack vs. the Seahawks' run defense

Over the final quarter of the season, the Eagles have averaged a shade over 30 rushes per game, which of course makes sense, given the state of their wide receivers.

The Eagles only ran it 18 times with their running backs in their regular season matchup against the Seahawks Week 12, but they were successful when they fed Miles Sanders, who carried 12 times for 63 yards (5.3 YPC).

The Seahawks, meanwhile, were downright bad against the run in 2019:

I hate to be the "Run the ball!" guy because it goes against everything that advanced metrics say about offensive efficiency, but, you know, run the ball.

On one side of the Seahawks defense is Shaquill Griffin, who has become a good NFL corner. On the other side (usually at RCB) is Tre Flowers, a long, 6'3 safety in college who the Seahawks have converted to corner. In the Eagles-Seahawks Week 12 matchup, Flowers was clearly the player the Eagles tried to attack, as he was targeted 10 times, by my count.

Sometimes the Eagles converted against Flowers, and other times they left some opportunities on the table, but for the most part, they were able to find separation against him. There's a good bet that's who they'll attack in the passing game again, and they have to get better results out of those opportunities.