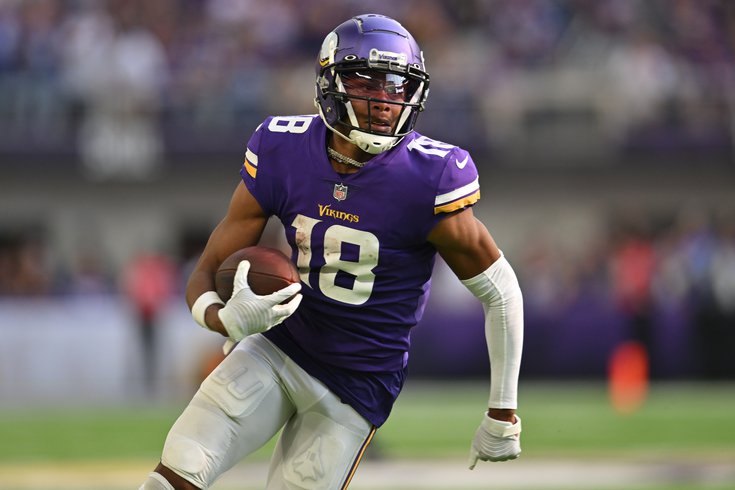 After their uneasy Week 1 win over the Detroit Lions Week 1, the Philadelphia Eagles will host the Minnesota Vikings in their home opener Week 2 on Monday Night Football. Here are our five matchups to watch.

Did you guys know that the Eagles could have drafted Jefferson in the 2020 NFL Draft, but instead they took Jalen Reagor? Little known fact, but it's true!

In two seasons in Minnesota, Jefferson has put up the following numbers:

Vikings get the Packers to play empty with 4-3 personnel by throwing out 12 personnel. Stokes and Alexander are taken up by a tight end and a running back.

Packers play quarters and Walker doesn't end up expanding enough with the out route from the slot. pic.twitter.com/ElXFFFejB6

"He can beat you all different types of ways, so when you're looking at his game, he's not a one-dimensional guy," Jonathan Gannon said on Tuesday. "He can take the roof off, he can beat you underneath, he can beat you with yards after catch. They do a really good job of deploying him different ways, so it's hard to have a plan for him to always have two guys on him. It’s going to be a good challenge for us, and we'll be up for it."

Leading up to the 2020 draft, Jefferson got labeled by some as "just a slot receiver," despite putting up huge numbers in LSU's offense both in the slot and as an outside receiver. Some Eagles folks were among those who viewed him that way, opting instead to take Jalen Reagor, who they believed was the outside speed receiver they were looking for. Jefferson was a savvy route runner who had plenty of speed in his own right, who had no problem getting separation at the college level, which then quickly translated to the pros. The lesson: Don't draft specific traits for what you think you need in the moment. Just take the better player.

Monday night will be the first time the Eagles will have to face Jefferson since that draft blunder, and it'll be interesting to see what the plan is to try to slow him down. Darius Slay is the obvious candidate, but as Gannon mentioned, it's hard to game plan for receivers that line up everywhere, particularly when trying to have a corner follow the best receiver without tipping coverages.

The Vikings have always had good skill position players, but their Kryptonite offensively has been their offensive line. In 2022, the Vikings have a very young line full of home-grown talent:

All five of those guys were drafted by the Vikings in the first or second rounds, and they have an average age of 24.8 years.

If you'll note in the Justin Jefferson video above, the Vikings ran slow-developing routes down the field against Green Bay, and the Vikings' O-line protected well. On average, Kirk Cousins took 2.96 seconds from snap to throw, which was the eighth-slowest time in the NFL Week 1. If the Vikings are going to run Jefferson on crossers 20 yards down the field, the Eagles' line is going to have to get to Cousins.

The player the Eagles should be looking to expose is the rookie RG, Ingram, who many felt was a bit over-drafted by Minnesota.

3) The Eagles' tackling vs. Dalvin Cook and Alexander Mattison

Oh, and the Vikings also have a deadly duo at running back in Dalvin Cook and Alexander Mattison, who combined for 126 yards on 28 carries against a very good Packers defense Week 1. Meanwhile, PFF had the Eagles down for 15 missed tackles in Week, most in the NFL.

"We have to clean it up because you can't get gashed like we did," Gannon said. "Just from a fit standpoint and a tackling standpoint, I think our execution needs to be a little bit better. Obviously, that starts with me. We have to coach that a little bit better to make sure our guys know exactly where they're fitting on certain runs. You give up two explosive runs for however many yards, that's going to skew the rush numbers, and that's what happened. We have to get those runs down a little bit better, a little bit quicker, and the rush per attempt will go down."

As usual, the Vikings have a pair of good edge rushers. This year it's Hunter and Smith, who each had a sack Week 1.

And this is fun from Smith, too:

"Za'Darius Smith, he was something else," Shane Steichen said on Tuesday. "He was a monster on Sunday against Green Bay."

Hunter has had some injuries in recent years, but when he has played he has been a menace, tallying 36 sacks in 40 games since 2018. Meanwhile, Smith has 27 sacks in 34 games since signing with Green Bay in 2019.

Mailata and Johnson vs. Hunter and Smith are the best strength-on-strength matchups of this game.

5) The Eagles kick/punt coverage units vs. the Vikings' returners

The Vikings' punt returner Week 1 was Jalen Reagor. In case you had forgotten, when Reagor was the Eagles' punt returner, actually fielding punts could be a bit of an adventure. The Eagles' gunners have to be alert for muffed punts, and Arryn Siposs must be sure to make Reagor catch his punts. (Don't kick it out of bounds.)

On kickoffs, however, Jake Elliott should be looking for touchbacks. You do not want to kick off to Kene Nwangwu, who had 2 return TDs on 18 kick returns in 2021. You can watch those here and here. He's fast.