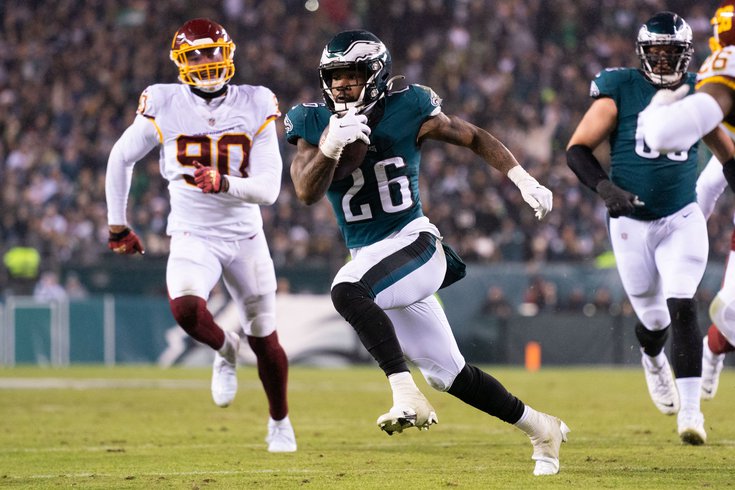 Philadelphia Eagles running back Miles Sanders in action against the Washington Football Team.

The Philadelphia Eagles' Week 15 matchup against the Washington Football Team was already going to be the Birds' most important game since the 2019 season, but now the stakes are even higher after the NFL senselessly postponed this game from Sunday to Tuesday, a move that will disadvantage the Eagles in their Week 16 game against the New York Giants.

There has been a lot to sort through on the injury and COVID lists over the last week or so, particularly on Washington's roster, after they had a COVID outbreak that led to 26 of their players landing on their COVID list, many of whom have since been reactivated — but not quarterbacks Taylor Heinicke or Kyle Allen. On the Eagles' side, there's been some debate whether Jalen Hurts or Gardner Minshew will start, but it appears that it will be Hurts.

We published our five matchups to watch almost a full week ago, but in such an oddball game in which it was a mystery who would even be available and who wouldn't, it was a difficult game for each team to prepare for.

Betting lines jumped all over the place over the last week, but the Eagles are currently 9.5-point favorites after news came down that Garrett Gilbert (who?) will be starting for Washington. Here are our staff writer picks — as well as who some others around the country are picking — and some over/unders for this rare Tuesday night matchup.