Who is Garrett Gilbert?

With Washington QBs Taylor Heinicke and Kyle Allen ruled out with COVID, Gilbert will start vs. Eagles 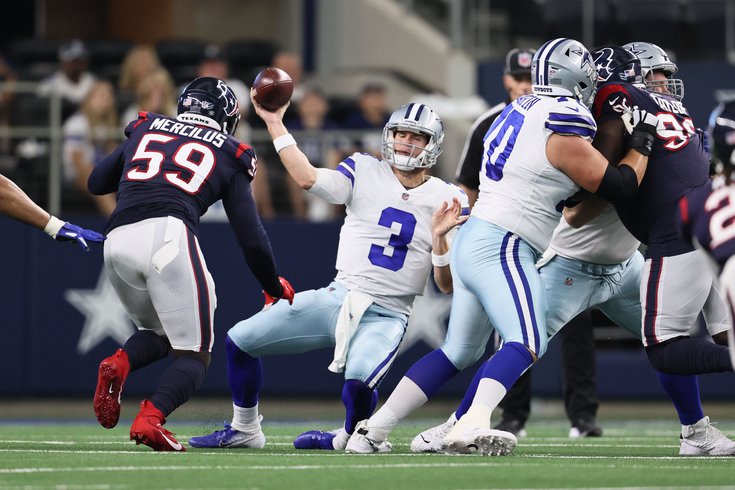 Garrett Gilbert shows off his unorthodox style of throwing with his left ankle bent underneath him.

The Washington Football Team's top three quarterbacks — Ryan Fitzpatrick, Taylor Heinicke and Kyle Allen — are all out against the Philadelphia Eagles Tuesday night.

Fitzpatrick's season is over after he elected to have surgery on an injured hip, while Heinicke and Allen were unable to clear COVID protocols in time to play.

On Tuesday morning, Ron Rivera acknowledged on 106.7 the Fan in Washington D.C. that if Heinicke and Allen couldn't go, the starter would be Garrett Gilbert, who Washington signed off of New England's practice squad on Friday.

So who is Garrett Gilbert? He is a journeyman quarterback who will be on his eighth NFL team after he was a sixth-round pick of the Rams in 2014.

A snapshot of his career:

He also played one season in 2019 for the Orlando Apollos in the Alliance of American Football (AAF).

Gilbert started one game for the Dallas Cowboys last season, a 19-24 loss to the Pittsburgh Steelers, in which he went 21 of 38 for 243 yards, a TD, and an INT. Prior to that start, he had only attempted six career passes, three of which were with the Panthers under Rivera.

MORE: A look back at 15 nicknamed Eagles games | WTS: If Hurts struggles, how long before Eagles go back to Minshew? | Five over/unders for Eagles' Week 15 matchup vs. Washington

"Garrett played for us in Carolina," Rivera said during his aforementioned radio appearance. "He actually played in a couple of games. He has a lot of familiarity with what we do, so he came back and picked everything back up right away. Last year, if you watched the Cowboys-Pittsburgh game, he came in and played a heck of a game in a loss. They almost won. He’s a very steady quarterback. He has good arm strength, can make all the throws. So we’ve got good familiarity with him."