A look back at 15 nicknamed Eagles games 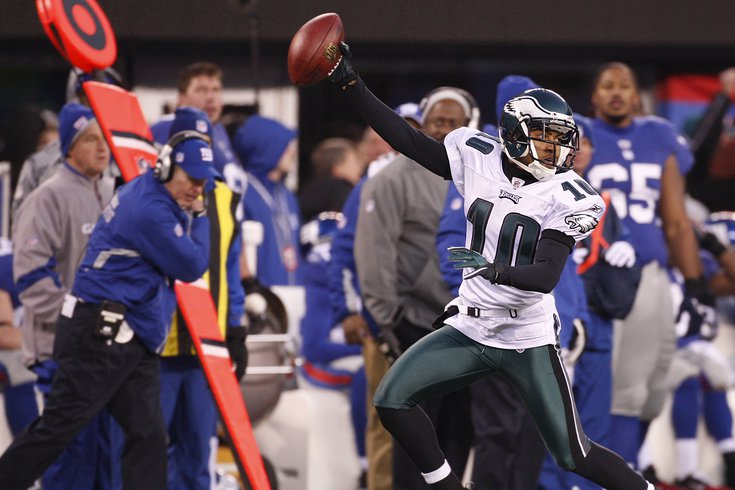 Former Eagles WR DeSean Jackson raises the football after scoring the game-winning touchdown against the Giants during the Miracle at the Meadowlands III back in 2010.

The Philadelphia Eagles are going to play a football game Tuesday night against the Washington Football Team under oddball circumstances. Since that game has some nickname potential, let's take a look back at some nicknamed Eagles games of yesteryear, in chronological order.

(We should note that because the NFL does not allow embeds of their content on other websites for some idiotic reason, you'll have to click "Watch on Youtube" if you're interested in seeing some of the videos below.)

Miracle at the Meadowlands I: Eagles at Giants, November 19, 1978

The Giants had a 17-12 lead and the Eagles had no timeouts left, when this happened:

Soon after, the "Victory Formation" was born.

Miracle at the Meadowlands II: Eagles at Giants, November 20, 1988

The Eagles drove deep into Giants territory on their final possession, setting up a game-winning field goal attempt, which the Giants blocked. Clyde Simmons grabbed the loose ball, and ran it in for a score.

The best part of this video is Bill Parcells running onto the field and screaming like a maniac at any referee that he could find that "HE CAN'T ADVANCE IT!" while John Madden explained from the booth that because it wasn't fourth down Simmons could indeed advance it.

This "miracle" was different from the others in that the likely outcome of the game remained the same, in that if it had just been a made field goal, it would have been an Eagles win. But it took a fun detour.

There's some debate on how many "Miracle at the Meadowlands" games there are. Some say two, some say three, and some say four. I say three, leaving out the time Brian Westbrook returned a punt for a late go-ahead touchdown in a game that the Eagles' offense couldn't get anything going.

When this game started, there was no fog. The Bears took an early lead, and the Eagles had some frustrating things go against them, like two touchdowns called back due to penalties, and a 4th and 1 sneak deep in Bears territory that maybe wasn't the best spot, and a dropped TD pass by Keith Jackson.

And then the fog rolled in.

I mean, talk about a game that actually should have been delayed, if only for a few hours.

The Cowboys, then a woeful team in Jimmy Johnson's first season as Dallas' head coach, accused the Eagles of having a $200 bounty on Luis Zendejas, and a $500 bounty on Troy Aikman. I guess Jessie Small really needed that extra $200, because he made a beeline to Zendejas after a kickoff and took him out. In the aftermath, Johnson and Buddy Ryan traded shots via television, and in the below video, Bears coach Mike Ditka even got involved.

The much anticipated second Eagles-Cowboys matchup that season occurred on a day in which there was snow and ice all around the stadium, that the grounds crew apparently just did not remove pregame. Eagles fans + snow + the Cowboys + a bounty scandal = this...

The name is pretty self-explanatory. A lot of Washington players got hurt, and RB/KR Brian Mitchell even had to come in and play quarterback.

I love the shirtless, stereotypical Philly dudes at the 2:09 mark above, followed by John Gonzalez saying, "You guys have the championships, we have the clever little nicknames."

Back when the Tennessee Titans were the Houston Oilers, the Houston Astrodome was known as the "House of Pain." In 1991, as Jerome Brown said, "They brought the house, we brought the pain."

Those Eagles defenses of the late 80's and early 90's were nasty.

The Eagles fed their players pickle juice to keep them hydrated on a blistering hot Week 1 day in Dallas, and the Eagles rolled the Cowboys 41-14. Along the way, the Eagles recovered an onsides kick on the opening kickoff, and Duce Staley ran for over 200 yards.

This was the day that the Eagles became the team on the rise, and the rest of the NFC East began to fall off.

The game is of course remembered for one play.

Freddie Mitchell thanked his hands for being great and the Eagles advanced to the NFC Championship Game, and yada yada yada, they didn't go to the Super Bowl.

Poor Winston Justice ended up playing eight years in the NFL, but he'll always be remembered most for this game.

Entering Week 17, the Eagles' playoff hopes were all but cooked. They needed the 13-point underdog Raiders led by Jamarcus freaking Russell to beat the Buccaneers, and the 3-point favorite Texans to beat the Bears. Those were both 1:00 p.m. games.

The Raiders surprisingly came through for the Birds, with Michael Bush running for 177 yards, while the Texans beat the Bears.

With new life, the Eagles came out during the late afternoon games and kicked the ever-living crap out of the Cowboys:

On a side note, I didn't realize until now that this was the game in which Jeffrey Lurie missed a high five, and instead smashed his then wife in the face.

Miracle at the Meadowlands III: Eagles at Giants, December 19, 2010

I still remember after the Giants went up 31-10 on the Eagles midway through the fourth quarter, there were loud cheers in the Giants press box, as they had finally secured a win over a team that had beaten them in five straight games.

Like Bill Parcells above, Tom Coughlin came out screaming, except it was at his punter instead of the officials.

The very next game after "Miracle at the Meadowlands III" was "The Joe Webb game," when a depleted Vikings team traveled to Philly to face the Eagles on Tuesday Night Football (sound familiar?) after inclement weather delayed the game, angering Ed Rendell.

The Eagles will try to avoid a repeat of that experience tonight.

My personal recollection of this game was that when I arrived to the stadium a few hours before the game there was very little — if any — snow cover on the field. And then, BAM, it came down fast and furious.

The Eagles were down early, but LeSean McCoy, seemingly playing with different shoes than everyone else or something, was able to bob and weave through the Lions defense for a huge day.

That was the most fun game I've ever covered.

This game is probably known a little more vividly (and painfully) in Chicago than it is in Philadelphia, but Cody Parkey's game-winning missed field goal, which in fairness was partially blocked by Treyvon Hester, send the Eagles to the divisional round of the playoffs.

Rickie Ricardo's "No Señor!" call was an all-timer.

The Eagles' front office did everything in their power to lose this football game, and ultimately succeeded. They had 10(!) inactives (mostly starters), they didn't dress Carson Wentz, and Nate Sudfeld entered the game with just a three point deficit in the fourth quarter.

Despite every advantage, Washington still struggled winning this game, and Joe Judge was left to whine about how the Eagles didn't help his crap 6-10 Giants team get into the playoffs.