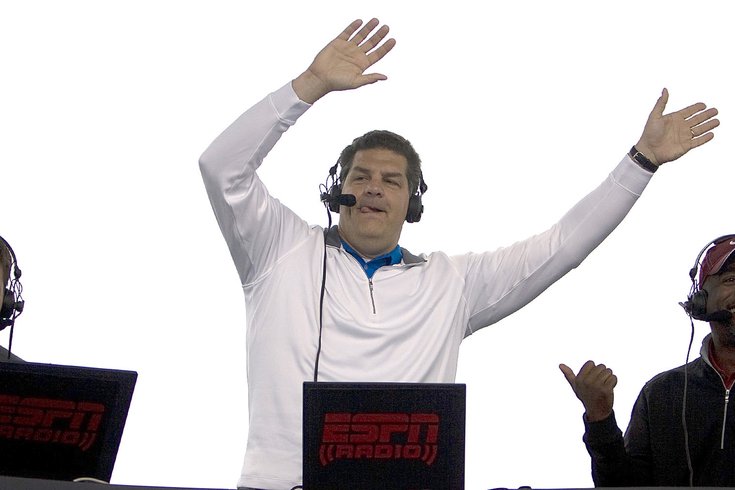 Former Philadelphia Eagle Mike Golic, above, recounted on the podcast 'Tell Us Your Story' about the time Jerome Brown and Ron Heller nearly started a naked brawl inside a locker room at training camp at West Chester University. Buddy Ryan was the Eagles coach at the time.

Fights among teammates are frequent sights during NFL training camps every summer.

As teams prepare for the upcoming season in hot weather, players tire of facing the same guys at practice every day, with routine tackles and hits often turning into wrestling scrums and punches being thrown.

But for some teams, such as the Buddy Ryan-coached Philadelphia Eagles from 1986 to 1990, training camp fights were encouraged, according to former Eagle and longtime ESPN broadcaster Mike Golic.

"You never had to worry if there was going to be a fight," Golic tells hosts Glen Macnow and Ray Didinger on an episode of the podcast "Tell Us Your Story" that was recorded during their radio show on SportsRadio 94WIP over the weekend. "It was how many fights are there going to be. I mean, there was never a question."

Golic says one training camp skirmish between defensive tackle Jerome Brown and offensive tackle Ron Heller nearly spilled over into a naked brawl in the locker room at West Chester University, which was the home of Eagles training camp from 1980-1995.

Golic played defensive line for the Eagles from 1987 to 1992. Eighteen minutes into the podcast, he describes how this fight began during one-on-one drills between the offensive and defensive linemen.

"(Brown and Heller) just don't stop on each other," Golic says. "And you know, Jerome doesn't really go against Ron. Ron's out at tackle and Jerome's playing on the inside, but that doesn't stop those two from going at each other, so it's just obviously progressing."

Other offensive and defensive linemen started fighting, too.

"There was literally a fight after every single one-on-one rep by all of us," Golic said. "Late pushing, late grabbing, late punching, everybody jumping in on everybody. I mean, it got to the point in all honesty where we were getting nothing accomplished. But, what the hell, we were fighting. We didn't give a damn."

That pushing and shoving continued on for the remainder of practice, only seemingly subsiding when the offensive line players headed to the locker room and Golic and rest of the defensive line then stayed out on the field for some more drills.

The defense finished its drills and headed into the locker room, tired and aggravated. In order to get to the lockers at West Chester, players had to first walk past the showers, where the offensive linemen had gotten a head start showering, according to Golic.

The defensive linemen, still wearing their full practice gear, made their way past the showers, as Heller walked out of the shower, Golic says:

"As we're walking in, Jerome's kind of in the front, we're kind of in a group walking and right as we're walking past the showers, there's kind of two entrances and exits to the showers, out comes Ron Heller. Walking out of the shower so he's obviously naked. And we're in full gear. And we all kinda stop because he's right in front of us, and Jerome and Ron look at one another and Ron says, 'Hey, hot day. Tough practice. Hey, it's over. It was on the field.'

And Jerome gave him just some smart-ass answer that anybody who knows Jerome knows Jerome was gonna do. And so Heller says, 'Fine. Cool. You wanna go now? We'll go now.' And he drops his towel and Ron gets into a boxing stance buck-naked. As this is happening, as these guys are jawing for a minute, the rest of the people are coming out of the shower, and some of them are offensive linemen and they're all naked. And we're all sitting there in our uniforms. And they're jawing and all of sudden, like I said, Heller gets into this boxing stance buck-naked and we're like, 'Are we going to do a West Side Story here? Are we fighting? Offensive line, defensive line? One in pads, one that's not?'"

But Brown, who starred for the Eagles from 1987-1991, was able to diffuse the situation and keep the linemen from brawling in the locker room.

"And finally Jerome, in just that monster laugh he had, just starts laughing at the sight of Heller," Golic said. "Heller would've fought. Ron was ready to fight buck-naked. He didn't care. And we all just started laughing, and that was the end of it."

You can listen to the full story and Golic's entire interview with Macnow and Didinger below.

There appeared to be no love lost between Brown and Heller during their time together in Philadelphia. The two were frequently at the center of fights, which may have stemmed from their Penn State and University of Miami football rivalry, according to NBC Sports Philadelphia.

Brown earned two All-Pro and Pro Bowl selections during his five seasons in Philly. He was 27 in 1992 when he died in a car crash in Brooksville, Florida. His No. 99 has been retired by the franchise and he's a member of the Eagles Hall of Fame.