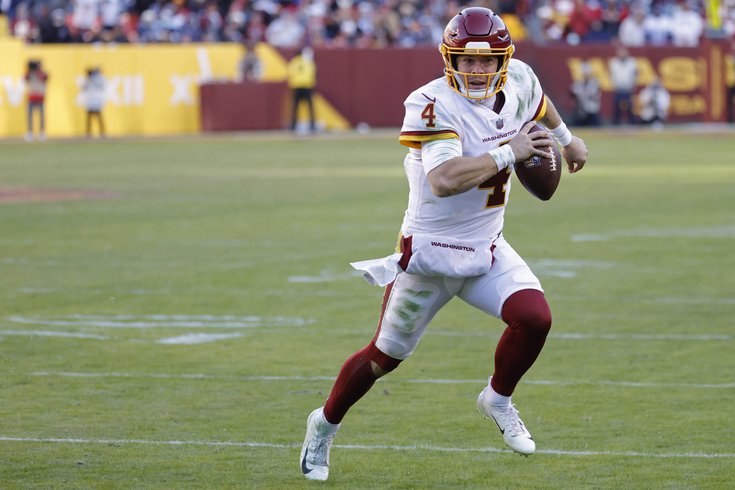 We didn't mention Taylor Heinicke below, but here's a picture of him.

The Philadelphia Eagles will be playing arguably their most meaningful game since 2019 this Sunday against the Washington Football Team, who are currently the placeholder for the 7 seed in the NFC, but have the same record as the Birds, at 6-7.

The Football Team started this season 2-6, with one of those wins coming via the luck variety, when a Giants offsides call gave them a second shot at a game-winning field goal. Expectations heading into this season were that they would have one of the best defenses in the NFL, but that did not materialize, as they led the league in points allowed, with 210, after Week 7.

More recently, they've played better, rattling off four straight wins before a very damaging loss to the Cowboys Week 14. But this is still a team that has a worse point differential than the Eagles by 104 points. Washington is -58, while the Eagles are +46.

As usual, we'll start with the Eagles' rushing offense, which is now first in the NFL with 160.0 rushing yards per game. On Sunday they'll face a good WFT run defense, at least statistically:

However, their defense has been decimated both by injuries and players on the COVID list. Chase Young is done for the season with a torn ACL, and the following defensive linemen are on WFT's COVID list.

Update: DT Matt Ioannidis reportedly is on the COVID list now, too.

Do they even have enough linemen to hold a practice? (I kid, of course, but Good Lord.)

And then additionally, they have major issues in their secondary, summed up here by Nikki Jhabvala:

*Benjamin St-Juste & Torry McTyer are on IR
*Danny Johnson is mostly slot
*Darryl Roberts hasn't played a def. snap this yr
*Corn Elder & Troy Apke haven't either
*Jeremy Reaves has played 1 — at FS
*There are no other CBs on prac. sq. pic.twitter.com/rAr5woHolP

William Jackson is still healthy, so he'll likely follow DeVonta Smith. While I'm not so sure the Eagles' other receivers can capitalize, a secondary depleted this badly could cause the Football Team to allocate more resources to the back end, leaving their run defense even more vulnerable.

The expectation here is that the Eagles will try to get Jalen Hurts back on track by running the ball early and often, and I believe they'll have success.

In 2020, the most obvious matchup to watch was the Eagles' banged-up offensive line vs. WFT's deep and very talented defensive line.

This year, the Eagles' offensive line is playing at an extremely high level, with three players — Jason Kelce, Lane Johnson, and Jordan Mailata — all worthy of Pro Bowl consideration.

As noted above, we won't really know which of the currently sidelined Washington defensive linemen will even be available on Sunday, which might normally be challenging from a preparation standpoint, but with the Eagles coming off their bye week, they will have had plenty of time to study up on Washington's full roster of linemen.

The concern for the Eagles will be the availability of Kelce, who injured his knee against the Jets Week 13, and did not return. Nick Sirianni said that the Eagles "received good news" on Kelce, but stopped short of saying that he'll be good to go for Sunday. If Kelce can't go, the Eagles will have to decide if they trust Nate Herbig to start at center, or if they should shuffle the line around.

McLaurin is the Football Team's best player on offense. See him to the right? He's waving to you. That's the guy the Eagles have to figure out how to slow down on Sunday, assuming he plays (more on that in a minute).

He leads Washington in receptions (61), yards (808), and TDs (5). The next closest wide receivers in each of those statistical categories:

McLaurin lit up the Eagles his rookie season in 2019, when he caught 10 passes on 12 targets for 255 yards and 2 TDs in their two matchups.

In 2020, McLaurin was slowed down some by Slay, who (mostly) followed him throughout each game. McLaurin was still effective, catching 12 passes on 15 targets for 101 yards and 1 TD, though a lot of that was when the Eagles were in zone coverage, as you can see here.

McLaurin and Slay even matched up against each other in 2019, when Slay was still with the Lions:

So they know each other quite well. Jonathan Gannon wouldn't say whether Slay would follow McLaurin or not (spoiler: he most likely will), but he did have praise for McLaurin as a player.

"He's a very explosive player," Gannon said. "They do a good job of manufacturing touches for him. He can beat you on all three levels – quick game, intermediate game, he can take the top off, has excellent ball skills, gets in and out of the cut very fast, he's physical, good run after the catch. This is a top tier player."

Meanwhile, Slay is having a Pro Bowl-caliber season, and has arguably been the Eagles' best player on defense in 2021.

McLaurin was concussed last Sunday against the Cowboys, when he landed on his head and shoulder after trying to win a contested catch opportunity.

As such, his availability for this Sunday against the Eagles will be in question. If you're the Eagles, you simply have to prepare like McLaurin is going to play, and be happy to adjust if he doesn't.

While 3.9 yards per carry and 6.7 yards per reception aren't super impressive averages, Gibson still has big play potential, as he's a big back (6'0, 228) with 4.39 speed. Highlight reel here.

The Eagles had some early season struggles stopping the run, but more recently they've been much better. On the season, they are allowing 3.99 yards per carry, which is sixth-best in the NFL.

5) Where could the Eagles' defensive line go feastin'?

The Eagles' defensive line hasn't done much feastin' at all this season, as they're tied for the third-fewest sacks in the NFL, with 21. Still, it's another matchup against a team with offensive line issues.

To begin, the Football Team will be without starting center Chase Roullier (fractured fibula), and starting right tackle Sam Cosmi is on injured reserve with a hip injury. Their starting five against Dallas last Sunday looked like this:

The Football Team has weathered those injuries this season and has played surprising well for most of this season, until Sunday, when they were overwhelmed by Dallas' pass rush.

In their loss to the Cowboys, both Leno and Larson left with injuries, and did not return. Saahdiq Charles replaced Leno, and Keith Ismael replaced Larson. If Leno and Larson can't go on Sunday, they'll be without both starting tackles, and they'll be down to their third-string center.