The Philadelphia Eagles' upcoming matchup against the Washington Football Team this Sunday is probably their biggest game since the 2019 season, and we're talking about mock drafts?

Personally, I'll wait until the season is over and we know where each of the Eagles' (likely) three first-round picks are going to land in the draft order before I publish a mock draft of my own, but as long as everyone else is cashing in on those sweet, sweet page views, I'll just go ahead and hop on that content train as well.

Philly jump-starts its three-pick Round 1 party with an explosive pass-rusher. Ojabo's first step is lightning fast, and he closes on the QB extremely well -- his 11.0 sacks and 14 tackles for loss this season prove it. Brandon Graham will be 34 years old and returning from an Achilles injury next season, and only two teams have fewer sacks this year than the Eagles' 21. And while they would love see Hamilton fall to them, the Eagles get a defensive upgrade with Ojabo. Michigan has had multiple first-round defenders only three times (1972, 2017 and 2019), but here it sends two to the top 10.

Quarterback is obviously a question mark, too. If the Eagles decide to move on from Jalen Hurts, they could deal some of their first-round picks to upgrade. But I can't see them gambling on a weak crop of QB prospects if they can't solve the issue by trade or free agency.

The Eagles have taken just one linebacker in the first round over the past 40 years (Marcus Smith in 2014), but it's obvious they could use a playmaker in the middle of that defense. Lloyd -- who has 96 tackles, 20 tackles for loss, 7.0 sacks and four interceptions for Utah this season -- is rangy and moves around the field like a 235-pound safety. He could quickly become a QB on defense for Philadelphia. Cincinnati cornerback Ahmad Gardner and USC receiver Drake London might also be in play.

The Eagles are projected to have three picks in the top 20, and we used the first two on defense (David Ojabo and Devin Lloyd). An NFL team has gone to the WR well in the first round in three consecutive drafts just once in the common draft era, per ESPN Stats & Information (Lions, 2003-05), but let's face it: Philadelphia still needs pass-catchers despite drafting Jalen Reagor and DeVonta Smith in the past two years. Wilson's body control in adjusting to the ball in the air is incredible, he has the wheels to make the big play downfield and he shows a nose for the end zone (12 TDs this season). Cornerback is another position to watch, especially with Auburn's Roger McCreary still out there.

#JimmySays: The quarterback conversation aside, edge rusher is clearly the Eagles' biggest need this offseason. It would be very surprising if the Eagles didn't grab at least one in the first round. Ojabo would be a risky pick this high, since he only has one year of college production, but in McShay's mock, three edge rushers go in the top 5.

As for linebacker, Jonathan Gannon's scheme necessitates better linebackers, whereas the Eagles could get away with mediocre talent there under Jim Schwartz. It will be interesting to see if the Eagles' valuation of the linebacker position in general finally changes.

And yeah, they still need a wide receiver.

The Ohio State duo will have their suitors in April’s draft, but Williams will be the favorite for every team looking to add freaky high-end speed at the position. A finalist for the 2021 Fred Biletnikoff Award, Williams caught 67-of-102 targets for 1,434 yards and 15 touchdowns with Alabama this season. He also dropped just six passes all year long while averaging north of 3.1 yards per route run on an absurdly high 15.2 average depth of target. He is the class’ premier deep threat and a perfect pairing with DeVonta Smith in Philly.

DO NOT OVERREACT, EAGLES FANS. JALEN HURTS HAS BEEN SOLID THIS YEAR. THIS DOES NOT MEAN PHILLY IS GIVING UP ON JALEN HURTS.

If you’ve made it to this point, Eagles faithful, I applaud you for working past the CMND+F “Eagles” and hearing me out. Hurts ranks 11th among all quarterbacks in PFF grade (80.0) this season. He’s played well and exceeded a lot of people’s expectations — so much so that Philadelphia’s brass should feel that they can keep him in their plans, at least for the immediate future.

However, the Eagles do have three first-round picks in 2022 and, therefore, an opportunity to add talent around Hurts and add competition at the most important position in football. Give Hurts the starting nod (obviously) in 2022 and reward him if he continues to improve and lead Philly to successful postseason efforts. Corral will still have obvious value in a league where trades for Sam Darnold and Carson Wentz are receiving second-round picks on the open market. And if Hurts doesn’t rise to the occasion in 2022, give the reins to Corral and get an early start on finding the quarterback of the future.

The NFL team that drafts DeMarvin Leal in the first 50 selections in the 2022 NFL Draft will be drafting him for the player he can be, not the player he is right now. The 6-foot-4, 290-pounder has rare size and athleticism that should translate to legitimate success at the next level if he can hone his skill set. After earning an 88.3 PFF grade as a true sophomore playing mostly edge defender in 2020, he kicked inside in 2021 and earned just a 70.3 PFF grade across 698 defensive snaps.

#JimmySays: If the Eagles draft a quarterback at 11th overall, it most certainly means Philly is giving up on Hurts. They're not taking a guy borderline top 10 to compete for a job. Seriously? (Also, if the Eagles are sitting at 10 and Corral falls to them, they should take him.)

Williams is a speed freak, and would pair nicely with DeVonta Smith. Jalen Reagor obviously ain't it.

I actually like Leal, but if the premise is taking "the guy a player can become," hard pass, at least in the first round.

The first quarterback off the board, Matt Corral heads to the Philadelphia Eagles as the top 10 comes to a close. Corral offers incredible athleticism and even better arm talent. His down-for-down accuracy is there, as is his ability to hit throws to all levels of the field. This move signifies the end of Minshew Mania and the Jalen Hurts era — Corral is ready to lead an NFL franchise.

With back-to-back picks, the Eagles grab a new weapon for their new quarterback. Chris Olave lands as WR1 as he possesses elite skills at every single desirable trait for a receiver in today’s NFL. He has tremendous catch-point skills and crisp routes. Olave is as fast as he is athletic and will quickly become Corral’s favorite target.

The Eagles grab their first defensive player in the first round after hitting the offensive side of the ball with Corral and Olave earlier. Nakobe Dean is as strong as an ox and hits like one as well. He’s a true three-down linebacker who can cover, stuff the run, and rush the passer when needed.

Dean plays with the type of urgency and physicality that has been lacking at times in the middle of this Eagles defense. And while Dean's playing on the best defense in the country, don't be fooled -- he's not riding on the coattails of a dominant defensive line -- he's been a huge reason for its success.

The Eagles are on track for three first-round picks, which means there's a great opportunity to address their defense. Booth has all the athleticism and tools to be special, and he balled out for Clemson this season.

This likely won't be a popular pick because the Eagles have used first-rounders on wide receivers the last two years, but they'll only have four wideouts under contract after the season, and that includes J.J. Arcega-Whiteside. London, meanwhile, was one of the few bright spots in a disappointing USC season. And while he won't run a 4.3 when healthy, he is a high-point-catch machine who can take over games, which sounds like something Jalen Hurts could use.

#JimmySays: If the Eagles finally take a LB in the first round, I can't imagine it'll be with the first of their three first-round picks. (Also, I like Dean, but he's not a top 10 player.)

Booth would be a fine pick at 11. London coming off the board before Treylon Burks could be a decision on the level of Justin Jefferson over Jalen Reagor.

And just for fun, submitted without commentary, I did a simulated mock at risendraft.com. 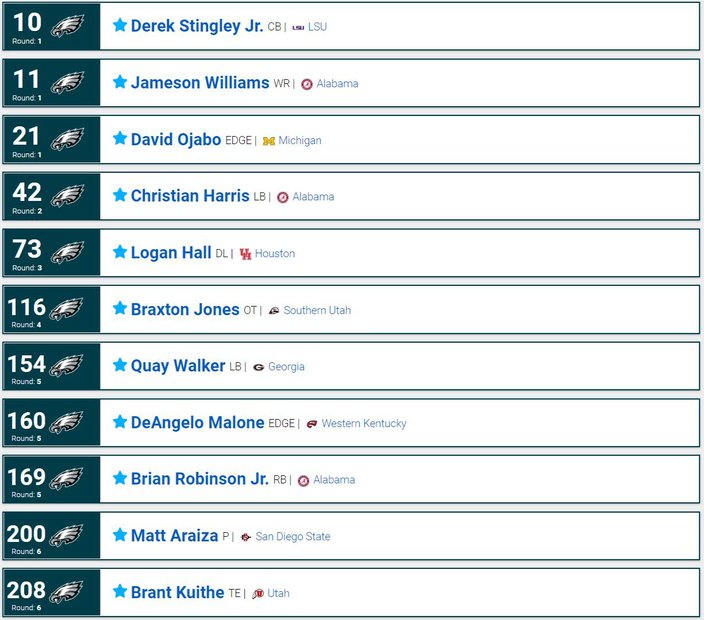