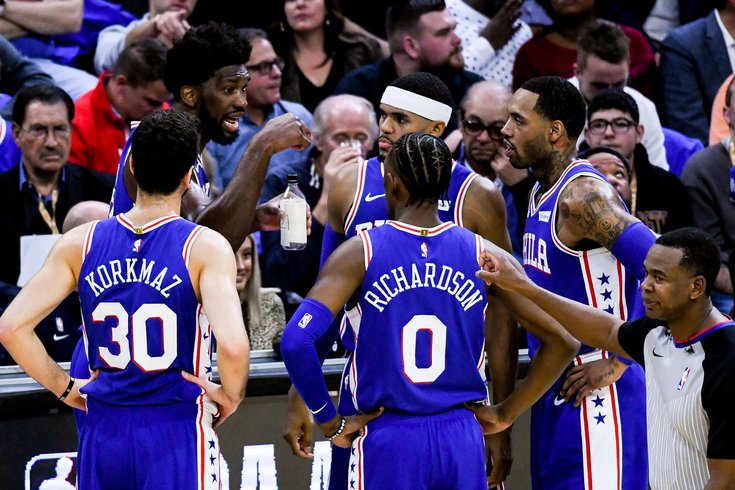 Seven games into the year, no one knows just about anything about an NBA team. It's the equivalent of less than 1.5 regular-season games on the NFL schedule, and well, okay, maybe the Philadelphia Eagles' frustrating mediocrity was already on display during that timeframe, so I might have to throw out this analogy.

Nevertheless, the Sixers have already given fans plenty of highs and lows during a 5-2 start to the year, and with Joel Embiid missing two games due to a suspension and a third for injury precaution, we have been able to see the Sixers tinker with different lineups and strategies to start the season. Some of the knowledge we have is new, some of it feels like a carryover from years past, and all of it will be weighed as they try to round this group into championship form by year's end.

So let's take a look at a few things that have stood out to start the year, starting with one that appears to have an easy fix.

Josh Richardson is probably not a point guard

Okay, so this one isn't really a trend, it's more of an evaluation. It is and was worth giving Josh Richardson a chance to play backup point guard, but unlike when Jimmy Butler was given the chance to do so last season, this one doesn't have past or present results to support season-long experimentation.

When Richardson is asked to be a secondary ballhandler in a lineup with a primary initiator, he is in the best position to succeed individually. Fans would have been over the moon to have another average ballhandler on the floor for the Celtics series two years ago. But when Richardson is tasked with being the lead guy on the perimeter, things start to fall apart.

That was true when he was the alpha for a painfully mediocre Miami Heat team last season, and it is true when he is at the controls for Philadelphia right now.

Those numbers jump dramatically whenever he's on the floor with Simmons, but perhaps more surprisingly, they soar with Neto on the floor as well. Lineups with Neto and Richardson on the floor together are in the 95th percentile for points per possession, and while turnovers and free throws continue to be a problem area, the team is markedly better in nearly every way as long as Richardson isn't the only credible ballhandler in the lineup.

Perhaps more importantly, Philadelphia's defense has not suffered even a little bit with Neto occupying that spot instead of Richardson. Richardson's minutes have often been tied to Embiid's, so that's worth keeping in mind here, but if the team can remain tough defensively as they get a little bit smaller with Neto at point, the offensive gains make it an absolute no brainer.

There has been a lot of consternation about the scheme the Sixers play to defend guards in pick-and-rolls to start the year, as there always is. They have given up some big halves to opponents so far this year, from Trae Young to Devin Booker to Donovan Mitchell, and I sense that this fanbase doesn't have a lot of patience left for Philly's bigs dropping in coverage.

What has been lost in that rage, however, is a change from last season — after giving up big first halves, the Sixers have made in-roads in the second halves of games, significantly improving on the defensive side of the ball after the halftime whistle. Trae Young came crashing back down to earth after a 15-point opening quarter in Atlanta, and Donovan Mitchell was 4/13 in the final two quarters of Wednesday night's loss to Utah.

That hasn't held in every matchup, of course, with Damian Lillard and Devin Booker cooking for all 48 over the last week. It's a perimeter-oriented league these days, after all.

Here's the thing about their success slowing guys down over time — while you might expect this has come as a result of vaunted "halftime adjustments," in truth, a lot of the success has come down to Philadelphia simply executing their base defense better. Look at these three plays from the second half vs. Utah, and you'll see the only Mitchell make in the mid-range is when Tobias Harris fails to get over the screen. It may not look like they're putting lots of pressure on him in the other looks, but they're at least making him feel them on his hip.

Philadelphia's performance on the defensive glass on these plays is another matter entirely, but this is the ideal scenario for Philly. Joel Embiid's primary defensive value is in taking away the paint entirely. Just because he's capable of switching and holding up on that island doesn't mean you want to ask him to do that at an above-average rate.

The Sixers have indeed tried some new coverages this year, but those have been just as mixed of a bag as their "centerfield" coverage, with blitzes and traps often leading to wide-open threes or layups without much resistance. I think there's a valid argument to be made that Philly should change the looks they show early, especially when their base defense is allowing guys to go off.

That being said, urgency to fight through screens might be their easiest path to improved first-half performances. I get it, fighting through screens is taxing and not fun, and for the guys with two-way responsibilities, they don't want to fully commit until the second half. But they could spare themselves a lot of extra work down the stretch if they didn't have to climb out of holes every game as a result of their poor first-half defense.

A tale of two teams and two bigs

Great news for Sixers fans: Philadelphia has outscored opponents by a sizable margin as long as one of Joel Embiid or Al Horford is on the floor. But one of the challenges ahead for the Sixers is taking the success of the solo big units and trying to find a way to maximize their two-way effectiveness with both guys on at the same time.

Here's a look at the lineup numbers with both men on the floor, just Embiid on the floor, and just Horford on the floor so far. Embiid has only played in four games so far, so as always, take all of this information with a grain of salt.

Thus far, the numbers track with what you would expect to see coming into the year. They are struggling to score with both guys on the floor, but their starting lineup has been as stout on defense as some of the best units of all-time. Swap out one of their big men for another rotation piece, however, and the Sixers maintain a huge advantage on the opponent while seeing their offense jump considerably.

Milwaukee's league-best defense last season gave up 104.9 points per 100 possessions, so maintaining this level of defensive toughness would almost certainly put the Sixers in competition with the league's best by season's end. Ultimately, it only matters that they are able to create an advantage in some way. Winning pretty is ideal, though they would just take winning by any means necessary.

However, if they are to have a chance at winning a title this season, the Sixers are going to have to find a way to score when all of their best players are on the floor. As talented on defense as they are, there is almost no way they can stop modern NBA offenses at a rate comparable to teams from bygone eras with inferior offensive talent and strategy. They have to manufacture points somehow, some way, and it's not abundantly clear how they get there with a starting group devoid of shot creation.

Will this all hold against elite competition? That's the million-dollar question. The good news, for now, is that the investment in Horford appears to have given them a chance to play excellent two-way basketball for 48 minutes, and that's a powerful thing.