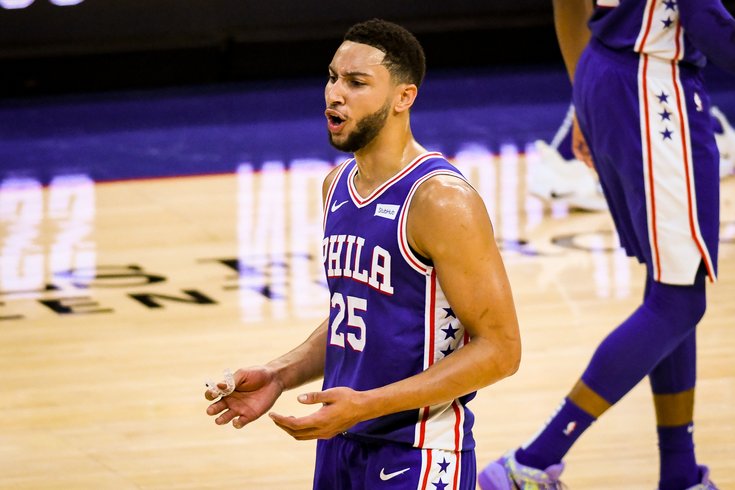 The Sixers were an absolute tire fire on offense and lost Ben Simmons to injury in the first half of their game vs. the Jazz, but they somehow managed to hang around until the final moments on Wednesday. Their comeback attempt would fall just short, and Utah emerged with the 106-104 win.

• This was a much-needed breakout game for Josh Richardson on the offensive end of the floor, where he has had a career-worst start to the season so far. Sometimes all it takes is seeing a couple of shots fall, and with Richardson knocking down triples early, the world opened up for him. Outside of a few flubs

His compete level hasn't dropped during the cold stretch to start the year, but you can see that success on offense puts a little more pep in his step on the defensive end, and he was as disruptive as he has been in a Sixers uniform on the defensive end Wednesday night.

(That said, YIKES at that Richardson turnover with the game still there to be won in the final 30 seconds. Just got caught in no man's land.)

• As the resident Raul Neto booster, I don't want to get carried away with how much credit he deserves for the efforts of guys like Richardson and Embiid, especially because he was not good on offense for a good portion of Wednesday's game. But simply having an NBA-caliber guard on the floor makes a world of difference for both guys and the rest of the lineup, and it's why he has to keep getting minutes.

For Embiid, lineups with Neto simply allow him to avoid double teams, which makes it a heck of a lot easier for him to get to the free-throw line or punish backup centers. In Richardson's case, he doesn't have to do anywhere near as much creating as he does when he plays the point guard role, and it simplifies his reads, masking any deficiencies he has from a skill standpoint.

And though he started slow, Neto's ability to, you know, dribble a basketball, was crucial for the Sixers as they made their fourth-quarter comeback, with the Brazilian slithering into the paint and getting to the rim. Add that on top of the defense, and his case has been made for backup point guard minutes moving forward.

I don't know if I'm onto something here, but perhaps the Sixers need more guys who can dribble and shoot, not less.

(After praising Harris' defense on the podcast Wednesday, by the way, Harris was not good against Utah on that end.)

• He played a minimal role on Wednesday night, but Furkan Korkmaz had another solid night from beyond the arc. I was betting on Shake Milton to win the bench shooter role, but with each passing day it looks like Korkmaz is asserting himself there.

• Welcome back to the lineup, Joel Embiid. Let's hope the lethargy shown at times was just a symptom of time off, because there were some bad habits on display for the big man.

At the top of the list was his insistence on playing as slow as humanly possible, trying to win repeated one-on-one battles against Rudy Gobert. I don't ever mind guys wanting to step up to the challenge of attacking high-quality competition, but you can do that without grinding the offense to a halt. Embiid did a decent job of playing with tempo in the first half, but he got slower and slower as the game went on, and late-clock shots against Gobert are often a losing proposition no matter how talented you are.

Some positive — the defense at the rim was as important as it has ever been, with Embiid the only thing standing between the Jazz and a bunch of easy looks at the rim. He got to the line a ton, which helped the Sixers stay alive despite a rough night vs. a tough Utah team. And though he wasn't able to cut down on turnovers entirely, we saw some excellent passing out of Embiid throughout the game in Utah, and that's the skill that will be the difference between him being the elite player he is now and an unguardable player on the low block. One of his assists was a particularly special pass, hitting Furkan Korkmaz on a cross-court pass with one hand like it was no big deal.

He has another big matchup on Friday against Nikola Jokic, so we'll see if he has a little more pep in his step for that one. For a game he usually gets up for, Embiid's effort was surprisingly substandard.

• The way the Sixers approach pick-and-roll coverage has been divisive in Philadelphia for years. It is frustrating to watch guards of all sorts tear them apart, especially when it's on shots the defense is basically conceding to them. That was the case in the opening quarter on Monday night, with the Sixers letting Donovan Mitchell get going to help keep the Jazz in the game during a slow start.

However, there are ways to play drop coverage that are a hell of a lot more effective than what the Sixers did Wednesday night. For one — the guard has to actually fight over top of the screen and pressure the driver from behind, something Ben Simmons wasn't too interested in doing to open the Jazz game. I'm giving him a pass on that front, frankly, because some of those possessions came after he picked up his shoulder issue, though he wasn't the only guy who struggled with screens early.

Finding a happy medium between sticking to your initial gameplan and adjusting when someone is carving you up is still something the Sixers are grappling with. They walked the line nicely against Atlanta when they adjusted to slow down Trae Young, and they'll need to keep working on shifting in and out of different looks as the season wears on.

• Shooting has been the subject everyone keeps hammering on about, but Philadelphia's dearth of ballhandling is just as big of a concern looking at the big picture. They do not have players who can create separation off of the dribble — you could argue Neto is their best halfcourt ballhandler, and as much as I like him in a 10-12 minute per game role, that is a sad state of affairs for the roster.

That is sort of the problem with building a team in the mold the Sixers are in. Yes, when they get matchups that are favorable for them, they can bully teams physically and impose their will on a game. But they don't have a physical advantage against a big, tough team like Utah, and the Jazz have better shooting and ballhandling than they do, leading to the result we saw on Wednesday night.

Let's throw another difference between the Sixers and Jazz in here — Utah is a balls to the wall team at almost all times, and while the Sixers have been better in terms of their minute-to-minute compete level this year, they still have lapses that shouldn't be there. Richardson let Jeff Green catch him on a potential transition dunk for absolutely no reason, and he was lucky to draw a foul on what looked like a clean block on replay.

Creating separation is the name of the game, and the Sixers don't have many guys who can do it.

• Good lord, Matisse Thybulle drives are just an absolute abomination right now. There is absolutely no finesse to his game on the offensive end. His handle is rough, he doesn't have good touch on layups, and his attempts to kick the ball out when he gets into the teeth of the defense are just an absolute adventure.

When Thybulle is at his best on the defensive end, it's easy to paper over the glaring flaws he has on offense. But when he's not creating turnovers, there's not a secondary contribution you can point to that helps out the team. Early days for him, of course, but he is going to need to make a gigantic leap forward on offense to avoid being unplayable down the road.

• Absolutely miserable night for Tobias Harris, and he couldn't have timed it worse with Simmons out of the lineup. His shot wasn't dropping early, and that apparently convinced Harris to take a backseat and let other players handle the responsibility on offense, which obviously went very poorly for all involved. There's not a whole lot to analyze here, Harris just shot poorly and missed looks that he's capable of making.

The only positive I think you could take from this game re: Harris is that he didn't allow the brutal start to take him out of the game completely, and he helped lead the Sixers on a mini-run to open the fourth to keep the game within striking distance. For a guy who has a reputation has a scorer, he doesn't play as if he's wired like one at times, and that's to his (and the Sixers') detriment. There are nights when Philly will need him to set aside brutal starts to come up big down the stretch, and someone should get in his ear and positively reinforce his response in the fourth quarter on Wednesday.

• Good game for Richardson, but the man is not a point guard. That much seems clear.

• This was the first sign of trouble for Ben Simmons in Utah, and it did not get better from there:

Here is the play where Ben Simmons appears to injury his right shoulder pic.twitter.com/KJPeGwEkyI

Philadelphia would end up ruling Simmons out for the rest of the game late in the second quarter, with the official issue being labeled as "right shoulder soreness." The team would eventually announce he has a minor sprain in his AC joint, and holding him out seems like just a precautionary measure, though that's only speculation because Simmons is a pretty tough guy who doesn't tend to miss a lot of time.

As much as he is turned into a punching bag at times because of the weaknesses in his game, Simmons is irreplaceable for this team, so if he ends up missing any time, the Sixers have a lot of ballhandling and defensive versatility to make up for. Stay tuned.