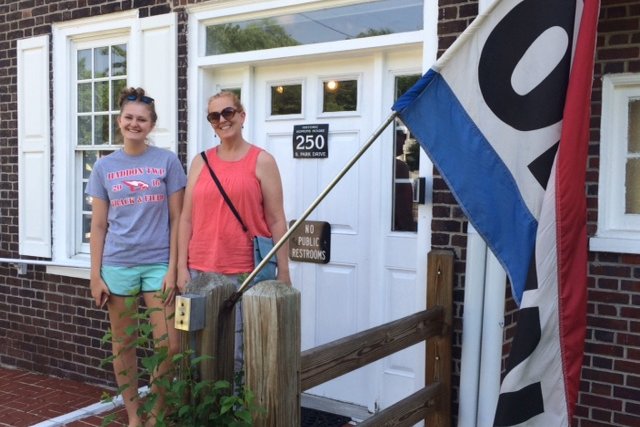 Nora and Kristina Shaughnessy went to their polling place in South Jersey's Haddon Township to vote in the primary. Nora discovered he registration was too late to cast a ballot for her candidate, Bernie Sanders. Kristina voted for Clinton, as will he daughter come the November general election.

Overnight, the New Jersey presidential primary between Democrats Hillary Clinton and Bernie Sanders went from crucial to – not so much.

But both sides continued playing out the clock Tuesday.

The Associated Press reported that Clinton hit the necessary 2,383 delegates to gain the nomination, with superdelegates who have declared their intention to vote for her added to the regular delegate tally.

On the other hand, the AP projects Sanders has just 1,569 total delegates as Tuesday’s primary.

New Jersey has 126 delegates up for grabs Tuesday, second only to California with its 475. Other states have votes Tuesday as well – Iowa, Montana, New Mexico, North Dakota (caucus), South Dakota and the District of Columbia – but their aggregate delegate numbers pale in comparison.

Which is why Derek Roseman, spokesman for the Clinton campaign in New Jersey, insists the state is still critical.

“Nothing in the past 12 to 18 hours has lessened the importance of New Jersey,” Roseman said Tuesday.

That’s because the count of regular delegates in the proportionally-awarded New Jersey primary should confirm Clinton’s presumptive status, said Roseman.

That would secure the Democratic nomination for the former secretary of state and make her the first woman to head the presidential ticket of a major party.

Jonathan Taylor, a volunteer at Sanders’ South Jersey headquarters in Collingswood, acknowledged Tuesday that the superdelegate projection does not bode well for his candidate, but said workers remain focused on turning out voters for Sanders.

“The numbers have not been looking good for some time,” he said.

But even given that, Taylor said the Vermont senator's campaign is focused on making sure the issues important to Sanders and his supporters are heard at the Democratic convention, which starts July 25 in Philadelphia.

Saying there are still more primaries to be decided, as well as the convention, Taylor added there is time to unify the party and “defeat Trump.”

Indeed, Donald Trump, the presumptive nominee of the Republican party is on his party’s ballot in the New Jersey Republican primary, though without real opposition. He never campaigned in the Garden State.

Ohio Gov. John Kasich and Sen. Ted Cruz of Texas are still listed on the party’s ballot in New Jersey, but they have stopped campaigning and conceded to Trump weeks ago.

For Kathleen McGuigan, the vote was more about duty than about excitement for Trump, whom she called “too outspoken.”

But her husband, a retired U.S. Naval Officer who has worked at the Pentagon, said he hopes that Trump, whom he likened to Sanders in their outsider status, will lessen bureaucracy if he takes office.

Thomas Nowicky, a Democrat in Haddonfield who said he voted for Clinton, said both of his parents are Republican and they, too, are drawn to Trump by his anti-establishment stances.

Democrat Michael Klauder expressed admiration for Sanders, but explained he’d voted for Clinton at a Haddon Township polling place where the registration is about 90 percent Democratic.

“I think he's a good man with good ideas, but he can’t get it done,” Klauder said.

Bob Hansbury, a poll worker at the Hopkins House polling place along the Cooper River in Haddon Township, said the district has about 600 voters and 50 had cast ballots as of early morning – double the turnout for an entire day in the last election.

Kristina Shaughnessy and her daughter, Nora Shaughnessy, also went to the Hopkins House to vote.

Kristina Shaughnessy knew about the superdelegate projection for Clinton and voted for her and local candidates, adding she hopes party unification can begin now.

Nora Shaughnessy was a missed opportunity for the Sanders campaign. She’d intended to vote for him, but discovered at the polling place that her registration was too late to allow her to vote in the primary.

She plans to now be a first-time voter for Clinton in the fall.

First-time voters and unaffiliated voters who join a party in order to vote in a primary are a fundamental part of the Sanders’ strategy.

And despite Nora Shaughnessy, the campaign seemed to have some success in bringing out unaffiliated voters.

Hansbury said six or seven of the 50 who had cast votes early Tuesday were unaffiliated voters who declared as Democrats and then voted, a rare thing in past elections.