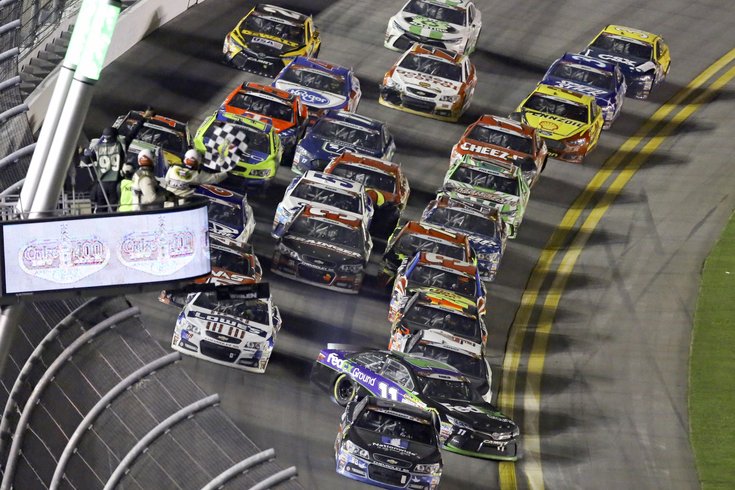 Dale Earnhardt Jr., front right, takes the checker flag to win a NASCAR Sprint Cup series auto race as Denny Hamlin (11) gets turned sideways in the beginning of a multi-car crash on the final lap at Daytona International Speedway, July 6, 2015.

After waiting out a long rain delay before the start of the Coke Zero 400, Dale Earnhardt Jr. crossed the finish line just before a dramatic wreck to claim his second win of 2015 with a victory in the NASCAR Sprint Cup Series race at Daytona International Speedway early Monday morning.

"Just great motors; the guys in the engine shops do such a good job, so got to thank all those guys," Earnhardt said. "My 88 boys, all the guys back at the shop, they put together such good cars. This car is the one we won Talladega with. It's going to get retired one of these days. Hopefully, we get to keep using it. Hopefully, the boss man doesn't put it in the barn yet."

A multi-car wreck at the end of the race sent Austin Dillon's car into a flip before it came to rest upside down with its engine and other parts scattered in the infield grass. Dillon finished seventh before his car damaged the catch fence in the midst of his roller coaster ride.

"I am just going to be really sore," Dillon said. "It got my tailbone pretty good and my arm. Should be fine, just go ice it up and get ready for Kentucky. But just thank the good Lord for taking care of me and for what NASCAR has done to make the sport this much safer. I just hope everybody in the stands is all right. That is the next biggest concern."

According to the NBC television broadcast, three fans were treated for injuries that resulted from the crash.

Jimmie Johnson came in second, and Denny Hamlin was third, though he spun at the end. Kevin Harvick and Kurt Busch rounded out the top five.

"The 4 (Harvick) was pushing me or trying to push me to the line, and he had us jacked up," Hamlin said. "We crossed the line, I thought, or we were close. He was trying to help, but it just wrecked a bunch of stuff. None of us were going to win the race. ... We all have wins, so at some point, you have to hit the concede button."

Earnhardt and Johnson restarted on the front row on lap 152 of the scheduled 160. As Earnhardt drove away with the lead, Johnson was forced to battle Hamlin and Trevor Bayne for second.

One final caution, the ninth of the race, came on lap 155, sending the race into overtime with a green-white-checker attempt. Hamlin and Harvick moved into second and third on the final restart, but Johnson was able to move back up to second on the final lap.

Kasey Kahne and Hamlin were in the top two spots on a restart just past the halfway point. Hamlin took the lead on lap 95.

Earnhardt restarted just outside the top 10 after a four-tire pit stop, but he was back up front just before a yellow flag on lap 105.

Earnhardt and Johnson got off pit road first and second and battled each other for the lead for several laps. Johnson held the lead temporarily before Earnhardt took over the top spot on lap 117. A few laps later, Paul Menard moved into third while Johnson gave up additional positions.

Bayne was another driver who got by Johnson. By the time Johnson got back up to third on lap 142, Bayne was second. A lap later, Johnson moved into second and Jeff Gordon third behind Earnhardt to give Hendrick Motorsports the top three spots. Bayne and Hamlin were running with the HMS teammates.

When a yellow flag waved on lap 157, Hamlin was third behind Earnhardt and Johnson.

Rain delayed the start of the race by more than three hours. The green flag was scheduled to wave at 8:20 p.m. EDT Sunday, but because of the rain and track-drying efforts that followed, drivers didn't fire their engines until 11:27 p.m.

When the face finally got underway, Earnhardt started on the pole, with Dillon next to him on the front row. Weather forced the cancellation of qualifying Saturday. Earnhardt and Dillon were awarded the top two spots by virtue of having the two fastest times in the first of two practice sessions Friday.

"I asked Greg (Ives, crew chief) before we went out to practice what we were trying to accomplish in that first practice, and that was the first thing he mentioned was to go out that first run and try to put a lap down because the weather wasn't looking real good for today," Earnhardt said after the cancellation of qualifying. "That was his decision. It ended up working out for us."

Dillon took the lead on the first lap, but Earnhardt was back up front soon after a restart following a lap-three caution. By the time a competition caution came on lap 25, Hendrick Motorsports held the first four positions in the running order, with Earnhardt leading, Johnson in second, Kahne in third and Gordon in fourth.