How to make a monster: makeup artist Casey Paul shares her secrets

Behind the scenes with Eastern State Penitentiary 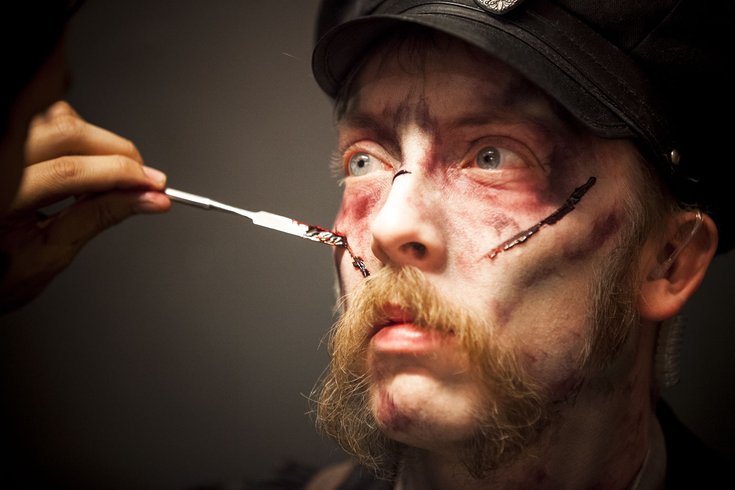 Assistant Attractions Manager and Line Staff, Fang, has a highly-visible position and receives a high-level look for his character for Terror Behind the Walls.

As one of the fourteen makeup artists at Terror Behind the Walls, the historic site's seasonal fright fest, Paul spends each October turning actors into monsters, ghoulish clowns and zombies. Together the elite team creates over 200 creepy creatures in under three hours, sending them out into the site's 11 acres to scare the pants off of visitors almost every night.

The job of Paul and her colleagues is getting more and more important, too. This year Terror Behind the Walls is celebrating its 25th season of scares and the Hollywood-quality spookfest is regularly named one of the top "horror tourism" attractions in the country. That means thousands of visitors come each year expecting bigger and better scares than the year before. 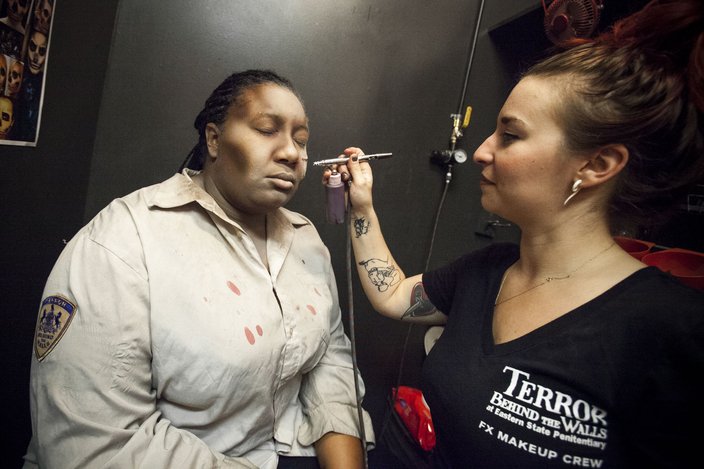 Casey Paul airbrushes the face of Darlene Smith, a Line Beast at Terror Behind the Walls. (Thom Carroll/PhillyVoice)

To add to the pressure, Eastern State Penitentiary has added two new attractions, "Quarantine 4D" and "Break Out," to this year's program. Each section has an added element of interactivity, meaning guests are up close and personal with Paul's creations.

"The interactivity has really altered how we do our makeup because now for the first time in the last few years you’re really seeing these monsters and these creatures close up," Paul said prior to a peak-season Friday show.

"You’re going to want to see their teeth being rotted out. You’re going to notice these things and they’re going to be so close to you – they’re much more in your face, which means for certain makeup designs, it needs to be that much more detailed."

Luckily for the audience, Paul is now in her sixth season at Terror Behind the Walls and she's the queen of gore and guts. She first became interested in special FX makeup as a Temple University theater major where she learned the basics of stage makeup.

"I was living with a lot of film kids in the dorms and they kept asking me to do film makeup for them," she said. "It was all based in gore and blood and I just kept learning things as I went on."

Eventually, she began getting hired for her specialties: blood, trauma and wounds. Paul's had no formal training in the industry, but working at Terror Behind the Walls, a very professional and high-end attraction environment, gave her all the education she needed, she said. Now, in addition to her makeup duties, she works in Guest Support and Administration at Eastern State Penitentiary by day, facilitating group sales during their busiest season.

But in the afternoon, she and the rest of the makeup team head to the bowels of the prison to set up their makeup booths. Within an hour, the first groups of actors start to flood in. In a whirlwind of brushes, colors and techno music, men and women are transformed into terrifying creatures.

Of course, Paul and company aren't using your run-of-the-mill costume shop makeup palettes. They use a variety of techniques, including a high quality airbrush system and alcohol-activated makeup that can only be applied with 99 percent isopropyl alcohol.

Specifically, Terror Behind the Walls uses a professional makeup palette from Skin Illustrator which has been made to suit their designs and color preferences. Plenty of top-notch haunts might use Skin Illustrator products, but, as far as Paul knows, they're the only one with a fully customized palette. It speaks quite highly to their team, as custom palettes are used most often on big-budget Hollywood projects like "American Horror Story" and "Pirates of the Caribbean." 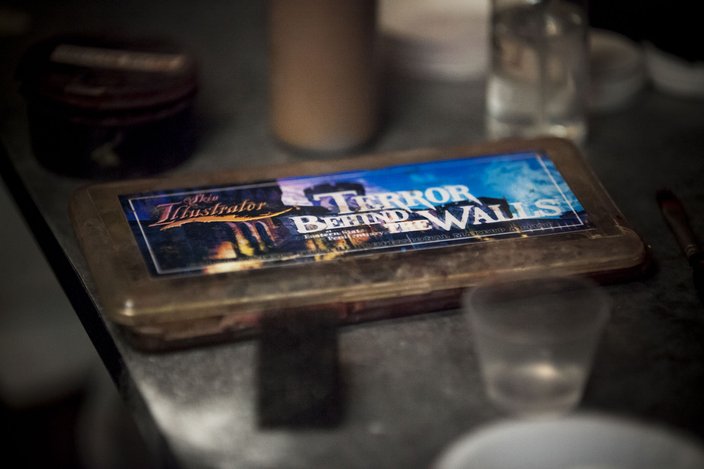 Skin Illustrator, an alcohol-activated makeup pallet which does not come off in rain or sweat, was created specifically for Terror Behind the Walls. (Thom Carroll/PhillyVoice)

The team also uses about 4,000 house-made prosthetics each season to create boils, scars, wounds and more. To ensure accuracy, the team does plenty of research into medical and autopsy photos. When the looks skew more toward fantasy, like with a Medusa character that roam's the prison's halls, they look to pop culture for ideas.

Current hits like "American Horror Story" and "The Walking Dead" are obvious crew favorites and over the years comic books and movies like "Pan's Labyrinth" have made it into brainstorming sessions.

"One of my favorite movies for effects is "An American Werewolf in London." It’s one of the first transformation sequences done on camera," Paul said.

"I like a lot of old school effects like that. CGI doesn’t really do it for me."

For Terror Behind the Walls, a makeup designer creates the go-to looks for each attraction and the makeup artists apply those themes to the site's many faces. Though the program often changes, a few standby rules for building a monster with makeup remain.

"When you go through a haunted house, you go by someone so quickly in the dark that sometimes it doesn’t need to have all that detail," Paul said, "It needs to have higher highlighting and darker contouring. A lot of contrast and something that’s going to be very effective in a very short amount of time. You want someone coming out at you from the shadows and be very impressionable very quickly."

Though each artist creates a variety of different looks each night, Paul does enjoy one look in particular. 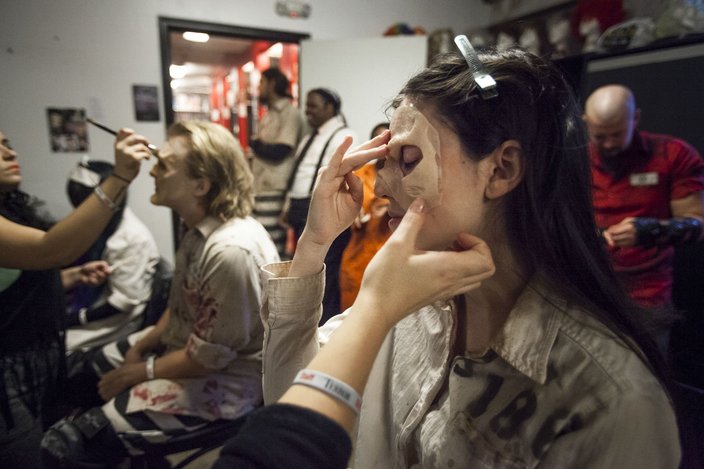 "My go-to look is probably a fresher kill zombie, so there’s still a little bit of color in there," she said. "I like to hit a lot of those shadow areas with purple and blend it a little bit back into the white so it’s not completely – there’s almost some “life” to the contrast, if you will."

Paul also has a signature makeup trick, which her colleagues call the "Casey Mouth." She'll have actors purse their lips tightly before tapping over them with flesh-colored cream makeup on a sponge applicator. When they release, their lips have a gorgeous, creepy crackle effect that takes only seconds.

The other crucial element to a spooky smile is doing away with those pearly whites.

To create tobacco-stained, rotted or even blacked-out teeth, Paul uses alcohol-activated cream makeup on dried teeth. It won't come off if the actors eat or drink, either.

At the end of the night, the makeup crew helps the actors take off their faces and teeth with isopropyl myristate, a cleaning agent that wipes away the alcohol-activated colors. While this process does put quite a bit of stress on skin, Paul said the crew puts an emphasis on safety and cleanliness, giving actors a skincare regimen at the start of the season and always using disposable products.

In the end, the work Paul and her compatriots do in such a short amount of time is nothing short of miraculous. Knowing how to create a monster is one thing - knowing how to make a few dozen a night is another thing entirely.

"I think part of the reason people come to see Terror Behind the Walls is because we’re at the top of our game for something like this," Paul said. "You’re going to get the best experience, the most well-done makeup, the most creative designs. In a location like this, you don’t get any better than these castle-like walls. You can’t make that up."