Ed Rendell wants the McRib back in Philadelphia

Governor's not sure what's in the sandwich, however 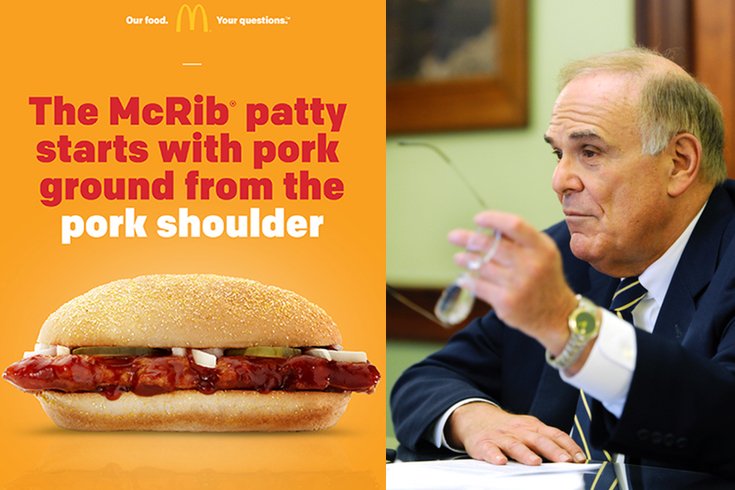 Ed Rendell wants the McRib back in Philadelphia.

Former Philadelphia Mayor and Pennsylvania Governor Ed Rendell has taken some time out of opining about the Eagles and calling out the nation's "wusses" to petition for a new cause: bring the McRib back to Philly.

Rendell, after a recent trip to Chicago, tweeted his frustration that the McDonald's sandwich -- consisting of pork, barbeque sauce, onions, and pickles --  was in several other major cities but not available in his hometown.

In Chicago McRib back here too. Pittsburgh, Chicago can Philadelphia be far behind?#PhillywantstheMcRtbbacknow!

He explained why he loves the McRib, which has recently been made available on a limited basis after being taken off the menu in 2005, to PennLive:

"The sauce is the key. Plus the fact you have no idea what's in the McRib – pork rib, beef rib, horse rib? It feels like an adventure every time," Rendell said with a laugh.

It's actually made of pork shoulder, according to McDonald's. The chain revealed the exact ingredients of the sandwich in 2014.

So, will Rendell's wish come true? An email to the McDonald's press office was not immediately returned.

However, a website called the McRib Locater, which relies on user submissions of McRib spottings, says one was seen at the McDonald's at 1401 Arch St. around 7 p.m. Monday.

A call to that location rang for more than a minute but was never answered.