The end of an era: Electric Factory bought by AEG, starts rebrand

The new name appears to be North Seventh – for now 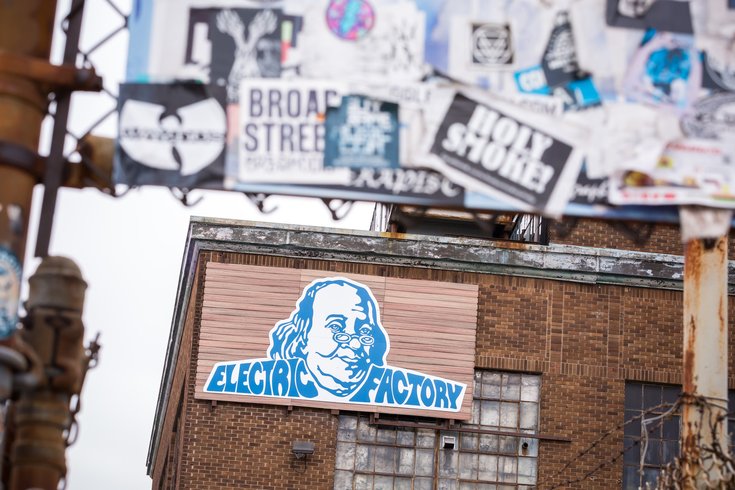 The musical institution that is the Electric Factory, which brought the likes of Jimi Hendrix to Philadelphia stages, has been bought by AEG and will ditch its Ben Franklin emblem for a new look and name, the venue announced Wednesday.

Promotion company Bowery Presents will take the reigns from Larry Magid, a Philadephia promoter who redeveloped the building, originally a General Electric plant, in 1994. The Electric Factory's original location was at 22nd and Arch streets until 1970.

It looks like as of Wednesday afternoon, the venue website and Instagram had been changed to "North Seventh," seemingly because it sits on North 7th Street. Ingenious.

On its website, the venue says it could not keep the "historic name" because of "restrictions by the previous owner." Instead, it wants concertgoers to help rename it. Oh goodie. You can read more about it here.

Philadelphia Weekly reported that Live Nation holds the rights to the logo, name and trademark and did not relinquish them to Bowery Presents as part of the deal, even though Live Nation hasn't brought a show there since March.

Arts & Crafts Holdings, the developer behind the Spring Arts District plan, purchased the property that Electric Factory sits on at 7th and Willow streets for $20.1 million back in 2017. It still owns the property, a media spokesperson told PhillyVoice on Wednesday. Questions regarding the partnership between Arts & Crafts and Bowery Presents were not immediately answered.

“We would like to thank the hundreds of thousands of fans who have attended the over 2,500 shows at Electric Factory from its original location at 22nd and Arch from 1968-1970 to its rebirth in 1995 at 7th and Willow," Magid and his partner, Adam Spivak, said in a statement on Wednesday. "A special thanks to all the employees, old and new, that have worked at the Factory over the years and to the great acts who have graced our stage, it’s been our privilege to work with you.”

🚨Philly Fam - we need your help. Visit NorthSeventhPhilly.com or click the link in bio.

This is yet another move that shows what kind of grip Live Nation and AEG hold on cities like Philadelphia and their main-stage music scenes. Just this week, The Met Philadelphia, run by Live Nation, announced its inaugural series lineup.

The name is arguably the only cool thing about the Electric Factory. Go back to New York, turds https://t.co/Bu2k6NGOEo

How about we save some time and just go with what everyone will call it anyway, "The Place That Used to be the Electric Factory" https://t.co/7ptOiouHtM

That’s a Philadelphia landmark, you can’t just do that man

“In the spirit of new beginnings, Adam and I wish AEG great success with our baby as well as Live Nation with their opening of The Met Philadelphia later this year," Magid said. "Fifty years ago we blazed a path and we feel very comfortable that the tradition of great music in one of the greatest music cities in the world will be well represented and will continue for many years to come. Thank you for all your support through the years!”

This story was updated after it was initially published with a statement from Arts & Crafts Holdings.