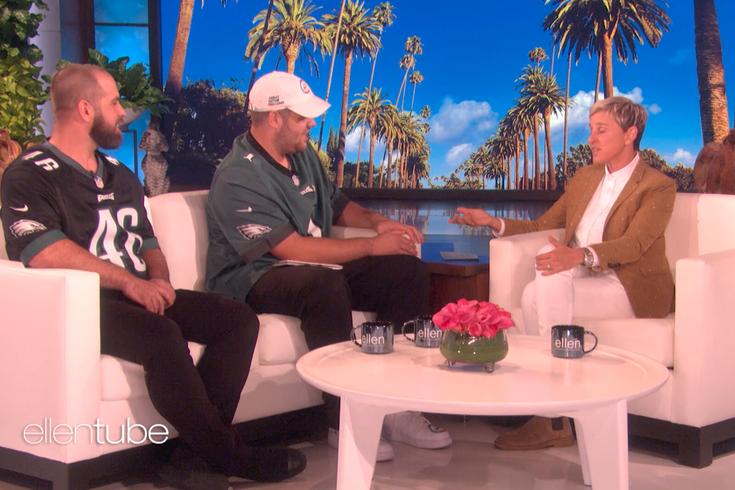 Jon Dorenbos joined Philadelphia superfan Ben Hartranft on the 'Ellen' show to surprise him with a $10,000 donation for autism awareness and a few other gifts.

On Monday's episode of "Ellen," 20-year-old Ben Hartranft, ambassador to the Eagles Autism Challenge (and whose Philadelphia Eagles fandom is only second to his love of Ellen Degeneres) was invited to appear on the show and given a couple of big surprises.

Hartranft was joined by the former Eagles long snapper and magician Jon Dorenbos, where he was given $10,000 for autism awareness, tickets to Universal Studios, and tickets to any of this season's remaining Eagles games plus field access.

The segment starts with Hartranft and Dorenbos under the impression they are filming something for the EllenTube page. But in her typical style, DeGeneres surprises Hartranft and pulls him up on stage.

You can watch the entire segment below.

"This is amazing," Hartranft said. "I dreamed about this for three years."

On stage, he tells his own story of being diagnosed with autism when he was 2 years old and being told he would never speak.

But today, Hartranft works multiple jobs — one as a host at Olive Garden and another as a greeter at Dorney Park & Wildwater Kingdom — and does outreach work for other individuals with autism.

My dream of being on The Ellen Show has come TRUE!!! Tune in this Monday October 22, 2018 on NBC 10 at 3PM to see how @JonDorenbos Dorenbos surprises me on the Ellen Show. @TheEllenShow I talked to Ellen about my autism and the Eagles Autism Challenge pic.twitter.com/ZhY569m8oN