Shirley Manson isn't afraid of the dark: empowerment lessons from a music icon

The Garbage songstress talks the power of truth, says women 'have to protect each other'

Garbage took the stage on a muggy October evening in New Orleans in 2002. The moment Shirley Manson sang the lyric, "I'm only happy when it rains," the heavens opened up.

“I called myself a witch,” Manson laughed.

The alt-rock band is currently on tour for the 20th anniversary and reissue of its seminal album, "Version 2.0." Embracing the platinum-selling album, Manson and company's live shows have been a full reflection of their journey with this album.

“We’re playing a different set this time around, playing songs people don’t know,” Manson told PhillyVoice. The reissue includes 10 b-sides that they've been playing – some for the first time.

“It’s really been a magical sort of experience for us and holding our audiences' attention to a lot of songs they don’t know has been a real challenge and one we’ve met,” she said.

Their first album, "Garbage," sold two million albums and received a Top 25 Billboard hit with “Stupid Girl.” But it’s Manson’s shift in focus that helped give the group’s second album its edge, cementing itself in music.

“With 'Version 2.0'  I felt a determination to be really true to myself,” Manson notes, “On the first record I wanted to please my band more, and on 'Version 2.0' I realized that attitude and that direction was not sustainable if I wanted to be in a successful band and be a successful strong, lead singer of my band. I realized that I had to take the reins in regards to what was coming out of my mouth or we would never last the test of time.”

Her mother was a strong influence for her and how she defined her presence in the world, she said. “She always told me you have to be the architect of your life. Nobody’s going to do it for you, and it's taking a long time for that lesson to really settle in me.”

Within this lesson, Manson has developed a strong desire to protect other women and the younger generation. She has been very vocal on her feelings with the #MeToo movement, and even blasted Morrissey for his comments on Kevin Spacey and Harvey Weinstein.

It's this passion that drives her to ask rather calmly, “Why do more women not support one another properly? I’m not saying put on a fake smile and march by. We have to protect one another.”  Adding, “This is a real pressing, moral duty we have to advance our fellow women. Until women figure this out, we’ll all still be at the mercy of the white patriarchy.”

Manson was one of the many very powerful female voices of the 1990s, and in discussing her experience with this strong female presence, she talked fondly of the period. "We really felt that we had broken through a glass ceiling. I mean, I can remember thinking at the time, ‘Wow, things are changing now and changing fast, and it’s incredibly exciting.’” 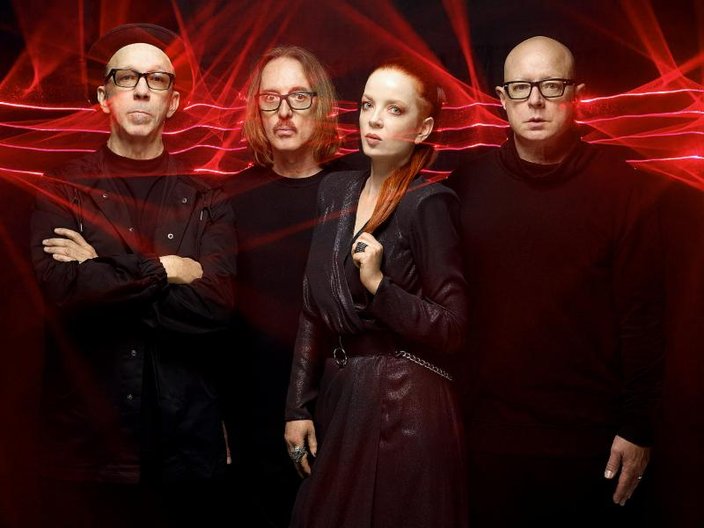 Garbage performs at The Fillmore on Thursday, Oct. 25, and at the Borgata in Atlantic City on Friday, Oct. 26.

She noted just as well that the movement "got pushed back," but it's in this sense that she sees the bigger picture. "My understanding of movements have changed, and I’ve realized now it’s like a wave, a wave comes up on the shore and each time it comes in, they come in a little further."

Manson opened up to The New York Times about her experience with self-harm in the ‘80s and during the success of "Version 2.0." While most of her lyrics may reflect “darker” topics and ideas, Manson wants to be clear that she doesn’t see it that way.

While many people may be afraid to acknowledge their problems, as Manson notes, darkness is a part of life. In many ways, "The only way out is through," and as Manson poetically added, there's empowerment to honesty of self and empowerment in speaking truth.

“I don't see problems that we face as humans beings as being dark. I just see them as ‘realisms.’ They’re realisms that that we must tackle in our life, each one of us. Every single person is given a bag of issues and struggles and weaknesses. Somehow we've been taught we are supposed to hide all these things and I feel quite the opposite. I feel like I want to shine a torch on all the problems that exist because secrets in life cannot hide in the shadows. If you shine the light on the darkness you can illuminate the problems."

Manson may not a witch, but she is an icon. (Icons can make it rain – no witchcraft necessary.)  From the moment she stepped into the spotlight in 1995, she has been an inspiration in music, for women, and a guide for anyone who chooses to see the darkness. Here's to the rain.

Garbage will perform at The Fillmore in Philadelphia on Thursday and at the Borgata in Atlantic City on Friday.