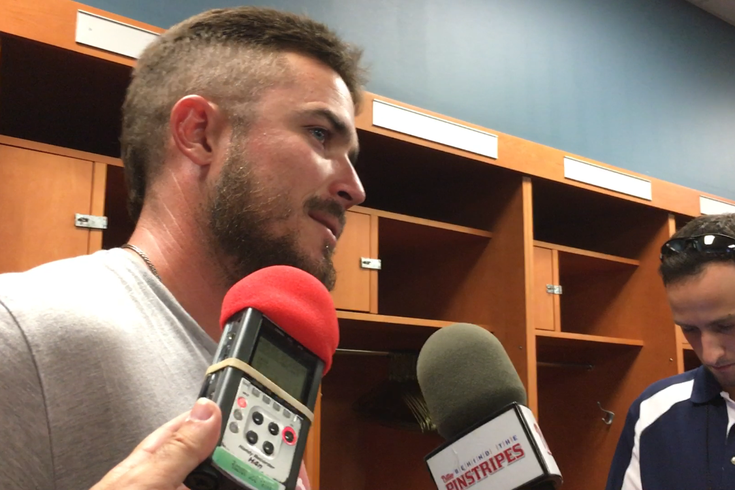 Brock Stassi, who will be with the Phillies on Opening Day, fights back tears while talking to reporters in Clearwater.

CLEARWATER, Fla. – The hallway between the clubhouse and the manager’s office at Spectrum Field was quiet Thursday afternoon as players and coaches shuffled through for meetings regarding the Phillies' final roster decisions of Spring Training.

Earlier in the morning, veteran pitcher Adam Morgan said a player “goes numb” when he walks into the room to meet the decision makers.

“I could feel my pulse in my head,” said Morgan, who made the team before the Phillies played their penultimate Grapefruit League game.

The silence outside manager Pete Mackanin’s office came after the game.

But it ended with one of the sweetest sounds in the sport: through the double door leading into the clubhouse came an echo of loud, hearty backslaps. There were hugs, too.

“That was Tommy [Joseph] and [Andrew] Knapp,” a red-eyed Brock Stassi said. “Special moment. I don’t really have the words to describe it.”

And then the words came, minutes after the former 33-round pick found out he made the Opening Day roster, and the tears quickly chased them down.

“I mean,” Stassi said as he tried to stop himself from crying, “a dream come true.”

Stassi wasn’t the only one fighting back tears, apparently.

“I got a little choked up, to be honest with you,” Mackanin said. “I've sent a lot of guys to the big leagues as a Triple-A manager. I had my share of sending guys down and releasing them, which is the worst part about my job. But over the years I have sent a lot of guys up and it's always fun.

“This was special to me. And I know it was to [player development director] Joe Jordan because [Stassi] has earned every bit of it. He's just a good-looking player. He gives you good at-bats. He's a good defender. He plays the game the right way.”

Stassi, a left-hander hitter who slashed .285/.383/.455 in 250 games with Double-A Reading and Triple-A Lehigh Valley the last two years, will back up Joseph at first base and be worked into the corner outfield spots, too.

He will be joined on Mackanin’s bench by veterans Andres Blanco, Aaron Altherr and Daniel Nava (the latter also made the team on Thursday after a monster spring) and another guy who will be in the major leagues for the first time, backup catcher Andrew Knapp. Infield prospect Jesmuel Valentin, also in contention for a bench spot, was optioned to minor league camp on Thursday.

In order to open up a spot on the 40-man roster for both Nava and Stassi (one opened earlier this week when Alec Asher was traded to Baltimore), the Phillies designated outfielder Tyler Goeddel for assignment.

Stassi, a Yuba City, Calif., native, wasn’t recruited out of high school and wasn’t taken until the 1,021st pick of the 2011 MLB Draft. He wasn’t even awake when his name was announced – his dad had to wake him up. Stassi wasn't even sure what position he was doing to play when he reported to the Phillies short-season team in Williamsport. He began his college career as a pitcher.

But he showed off his bat plenty this spring, slashing .333/.397/.702 with six home runs and 17 RBI in 24 Grapefruit League games. All along, from that first summer in Williamsport to this spring in Clearwater, Stassi didn’t have the mentality of a guy who was happy just to be playing professional baseball, no matter the level.

He wanted the same thing he’s ever wanted: to be a big-leaguer.

“I always believed in myself,” Stassi said. “Even though Williamsport didn’t go well, I always had confidence that I would work hard. When I was in high school I wasn’t recruited to go to college, a late pick. So, a lot of confidence. Yeah, so, it was always my end goal and I never doubted myself, ever. … My scout Joey Davis drafted me, 33rd round. He [crying] saw something in me. And I’m just so thankful.”

The tears continued. Stassi will have a few more when he gets through to his parents – neither answered the phone when he called immediately after emerging from Mackanin’s office.

“They’re at work,” he said with a laugh. “Working. They’ll be there Monday.”

The Phillies will be in Cincinnati on Monday for Opening Day.

“I’m going to celebrate tonight, but it’s not done,” Stassi said. “I don’t just want to get there, I want to stay there. I accomplished one of my goals. I’m just looking forward to the next one.”

Congrats to my big brother @brockstassi28 !!! I couldn't be happier!!!!! pic.twitter.com/iBqcRtVJdX

Stassi's younger brother, Max, who has played 30 games with the Houston Astros in the last four years, sent out a heartfelt, congratulatory message to his brother through Twitter shortly after hearing the news. Among the highlights of the brotherly love from Astros camp:

"I can’t even begin to describe how happy, excited, thrilled I am for my older brother Brock. He has truly earned everything to get to this point in his career. Everyone has heard some kind of cliche underdog story, well this isn’t one of those.

"My brother Brock .. was cut in Area code tryouts … was told he wasn’t good enough to hit in college … was an offseason substitute teacher (driving 50 miles each way) after teaching (to give) hitting lessons 2-3 hours a night … struggled a few years in the minor leagues … (and) now (he’s a) BIG LEAGUER!!!

"My brother is a prime example to everyone: chase your dream, prove doubters wrong, and GRIND!!!!!!!!”