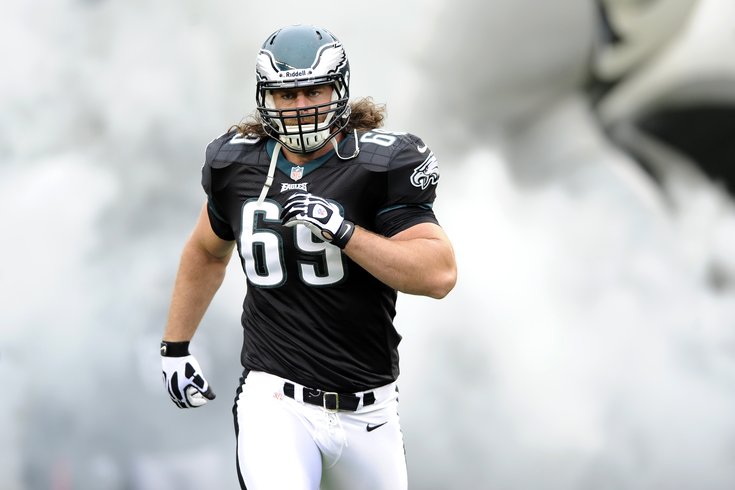 Going into the season without Evan Mathis would cause a downgrade at three OL spots.

Can the Eagles trade or cut Evan Mathis? It seems crazy, but so did cutting a wide receiver coming off a season in which he caught 82 passes for 1332 yards and 9 touchdowns.

On the final day of the draft, Kelly (wittingly or not) took a shot at Mathis when he was asked if Mathis would be traded.

For those of you unfamiliar with the word "deez," it is a shortened version of the phrase "deez nuts." Here is how UrbanDictionary.com defines "deez nuts."

1) A sarcastic expression used to denote annoyance or frustration.

2) A term used when you just don't give a [gosh darned hoot].

Mathis may have shown his annoyance, frustration, or that he simply didn't give a gosh darned hoot about Kelly's comments, but from this perspective it would appear that Kelly and Mathis aren't boys. (Urban Dictionary defines "boys" as "friends," or "part of the crew.")

Mathis did not hold out last year during OTAs. This year he is, and Kelly said yesterday that he has not spoken with Mathis recently.

Heading into OTAs, the Eagles' starting offensive line was projected to look like this:

In Mathis' absence, the Eagles starting offensive line was the following:

That combination is very interesting. As Tommy Lawlor of IgglesBlitz.com pointed out, why move Barbre over to left guard?

Mathis is expected to be the LG this year. Barbre would then play RG. Why not let him spend as much time as possible there this summer so he can get as comfortable as possible? Every rep is a chance to work on footwork, technique and things like that.

Does this mean Tobin could win the RG job?

Or does this mean something could happen with Mathis and the starting OGs could be Barbre and Tobin? You don’t want to read too much into something like this, but it does seem interesting to me.

Let's evaluate each of those three possibilities/points:

Why not let Barbre get as many reps as possible at RG?

Tommy's focus was on footwork and other nuances that Barbre could be improving upon by focusing on one position. But there's also the whole "cohesion" thing. In a world where the Eagles' OL will be what they rolled out yesterday at OTAs, the OL starters will have almost no experience playing with the guy immediately to their left or right:

It takes a long time for an offensive line to get good at blocking blitz pickups, stunts, twists, etc. The Eagles' offensive linemen will have logged no significant amount of time playing with the guys next to them. That's a problem.

Does this mean Tobin could win the RG job?

The Eagles would benefit greatly from Tobin stepping up his game and winning the starting RG spot. The Eagles are extremely light on OL depth, particularly at the tackle spots, so it would be ideal if Barbre could resume his role as a versatile backup who can fill in at four positions along the line.

Last season, Tobin didn't play well when he was forced into action, however, his NFL debut came at an inopportune time as he was banged up as well. The Eagles like Tobin, and if he can force his way into the starting lineup and be at least an average starting guard, that would help solve some of the Eagles' personnel issues along the offensive line.

Perhaps we just had the projected starters wrong. Maybe it's Tobin at RG, and not Barbre.

Or does this mean something could happen with Mathis and the starting OGs could be Barbre and Tobin?

It's only May, but this is something to watch going forward.

UPDATE: Mathis reached out to me to say that his "deez nuts" tweet was not in response to Chip Kelly's comments. He did not appreciate the "[redacted] sensationalist attempt at connecting a deez nuts tweet to a random line from a Chip Kelly presser." He also pondered whether a poop he took on 9/11 caused 9/11.